The "caravan" of immigrants that sent the President off the deep end on immigration issues is basically coming to an end. 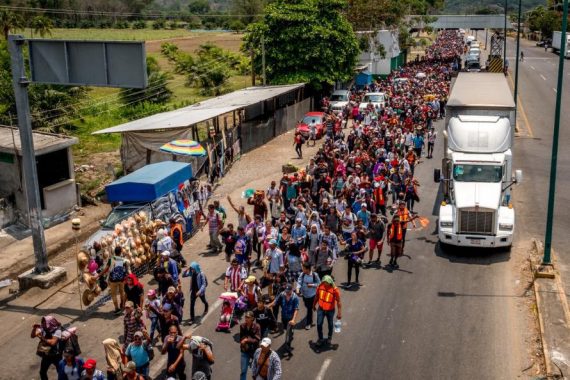 For the better part of this week, President Trump has tweeted several times regarding what some have called a caravan of Central American immigrants that have been making their way north through Mexico from Honduras. While the story appears to have originally thanks to an embedded reporter from Buzzfeed who has been traveling along with the group, the story has also received fever-pitched coverage from Fox News Channel, which has made this event appear as if there was some kind of massive army of mostly Central Americans marching north intent on sneaking across the border, and that Mexico was doing nothing to try to stop them. Instead, as many of the reports from Buzzfeed and elsewhere have indicated, what we’re dealing with here is a somewhat loosely organized group of people trying to make their way to the United States. In some cases, the participants in the “caravan” aren’t migrants so much as they are activists seeking to use the event, which has taken place more or less annually, to bring attention to human rights abuses in nations such as Honduras.

In addition to this, it’s worth noting that, as was the case in 2014 when a similar “caravan” seemed as though it was overwhelming the ability of border agents to handle the influx, there are legal reasons why the migrants who do make it to the border cannot always be simply turned away.

Most importantly, several international agreements to which the United States is a signatory requires a nation receiving anyone claiming asylum to be granted certain rights, including hearings to determine the merits of their claims in some cases. This is further complicated by a law that was passed in 2008 that places restrictions on what Federal authorities can do with people who arrive at America’s borders from nations other than Canada or Mexico. Under that law, the William Wilberforce Trafficking Victims Protection Reauthorization Act of 2008, unaccompanied minor children from one of these “noncontiguous nations” cannot simply be deported immediately the way a minor from Mexico or Canada can be. Instead, they must be taken into custody and processed through the immigration system to determine whether or not they are eligible for asylum under the U.S. law. In 2014, the number of such child refugees traveling alone was so large that the system at the southern border was overwhelmed due to the fact that it didn’t have sufficient resources to handle the influx. At that time, President Obama asked Congress to authorize emergency funding which would have been used, among other things, to hire additional immigration hearing officers and support staff to deal with the large number of cases that ICE was forced to handle. President Obama also called on Congress to amend the aforementioned 2008 law to make it easier to deport these migrants when they arrive at the border. Congress, which at that point was made up of a Republican House and Democratic Senate, did not act on either of these requests.

In any case, the breathless coverage of this “caravan” on Fox News Channel and other conservative media outlets has apparently been the primary motivation for President Trump’s recent hardline anti-immigration tweets, and also serves as the primary motivation for his decision to send National Guard troops to the border to perform duties that are entirely unclear at this point. In any case notwithstanding all of this panic, it appears that the caravan or whatever you wish to call it has been largely halted by Mexican authorities and that it now plans to end its journey in Mexico City although smaller groups may still try to make their way north:

MATIAS ROMERO, Mexico — The caravan of Central American migrants that has prompted scathing tweets from President Trump is expected to end its journey at the Mexican capital rather than pushing north to the U.S. border, organizers said Wednesday.

The sheer size of the group — more than 1,000 people, swollen by Hondurans leaving their country after a contentious presidential election — has made the logistics of travel too difficult, they said.

“When we saw the numbers, we were shocked,” said Irineo Mujica, a Mexican American activist who is helping organize the trek. “It’s impossible to travel with this many people.”

Trump warned on Twitter this week that a “big Caravan” was “now coming across Mexico and heading to our ‘Weak Laws’ Border” — one of a number of warnings he issued about the march. The president, who made the fight against undocumented immigration a core campaign promise, declared that he would sent troops to the border to prevent a flood of illegal crossers

But while many of the Central Americans in the group say they will try to get to the United States on their own, it has been decided that the organized caravan will finish in Mexico City after a stop in the city of Puebla later this week.

Some of the families huddled under tarpaulins and trees at a soccer field here said they were frustrated to learn that the caravan won’t reach the border, having counted on the protection offered by the big group.

After fleeing San Pedro Sula, Honduras, because of gang threats, Katerina Dominguez Enamorado, 22, had been in Tapachula, a southern Mexico town, when she joined the caravan. She expected it would end in Tijuana, the Mexican border town across from San Diego. If she had known it would go only halfway across Mexico, she said, she would have tried to work in Tapachula and save money for the journey.

“My mission is to reach Tijuana, even if I have to beg for money and hitchhike,” she said.

Mexican immigration officials on Wednesday handed out legal permits of up to a month to hundreds of migrants who spent their fourth day in a public park here in the southern state of Oaxaca, waiting for the caravan to continue. This spares them from immediate deportation but is not a long-term solution. For Mujica, the organizer, that’s as much as he expects.

Mujica, the director of Pueblo Sin Fronteras, a migrants’ rights group, said he never intended to bum-rush the group over the border. In fact, he said, many of the migrants hoping to reach the border planned to ask for asylum — not sneak over illegally.

Caravans like this one are common as an attempt to raise awareness, but they exist apart from the regular flow of migrants. Conservative U.S. media seized on this year’s caravan as an example of unchecked migration, and Trump’s comments brought it more attention.

Although the president has repeatedly warned about the dangers of illegal immigrants pouring over the border, the numbers have fallen. U.S. border authorities reported a 26 percent decline in the number of people detained along the Mexico border in 2017 compared with the previous year.

Mujica reiterated that the point of the caravan was to emphasize the need for legal reforms, draw attention to the migrants’ plight and press for more welcoming policies from Mexican authorities. He said “the best thing we have won” from the spotlight Trump has turned on this particular group is a high-level meeting with Mexican immigration authorities to talk about long-term change.

Before, “it was like deaf ears, nobody was listening,” Mujica said, adding that migrants will be able to “exercise their rights with these documents.”

Organizers say that migrants can now take buses on their own to Puebla, a city south of the capital, where a workshop on immigration law is planned for Friday. Rodrigo Abeja, one of the organizers, said help was being sought from a breakaway faction of Mexico’s teachers union, which has years of experience convening large protests and is generally aligned with the country’s leftist presidential candidate, Andrés Manuel López Obrador. But the logistics remain fluid.

Even before Trump got involved, this had become the biggest caravan that this group of organizers had seen.

Many Hondurans who fled after their country’s contested presidential election in November had already amassed in Tapachula and joined the caravan when it set off late last month. Mujica said that at least 80 percent of the migrants are from Honduras.

One of them, Maria Elena Colindres Ortega, 43, had been a congresswoman in Honduras until January. She said she joined in the hope of eventually applying for political asylum in the United States. More than 20 people were killed in post-election protests, and Honduras has long been a dangerous place for activists.

“I couldn’t wait for them to kill me,” Colindres Ortega said.

All of this goes a long way toward saying that the crisis that Fox News Channel and Trump have been trumpeting for the past week or more is, for the most part, non-existent. This seems especially true given the fact that the vast majority of this “caravan” will stop far short of the border with the United States, and that the smaller groups that will travel on will most likely be far easier for border authorities to deal with. This is especially relevant given the fact that border crossings from Mexico continue to be at the lower levels that we saw for much of the Obama Administration. That can be demonstrated most easily in this chart from U.S. Customs and Border Enforcement: (click to enlarge) 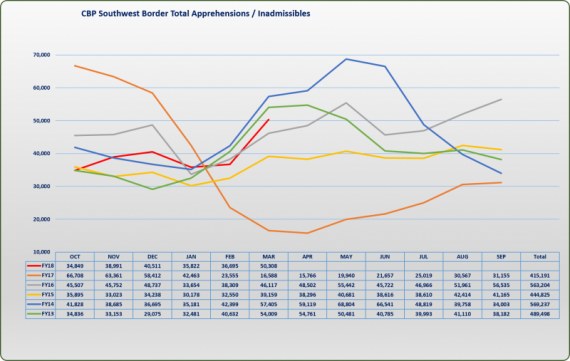 The orange line represents border apprehensions in the previous Fiscal year, which ended on September 30, 2017, while the red line represents apprehensions in the current year through March. While the data does show apprehensions have gone up in the months since October 2017, those numbers are not appreciably higher than where they’ve been since the beginning of President Obama’s second term. In other words, there is no “immigration crisis” at the southern border, except for the one that exists in the mind of the President of the United States, which seems to mostly take its cues from the “information” it absorbs from Fox News Channel.