The Winds Of Mars 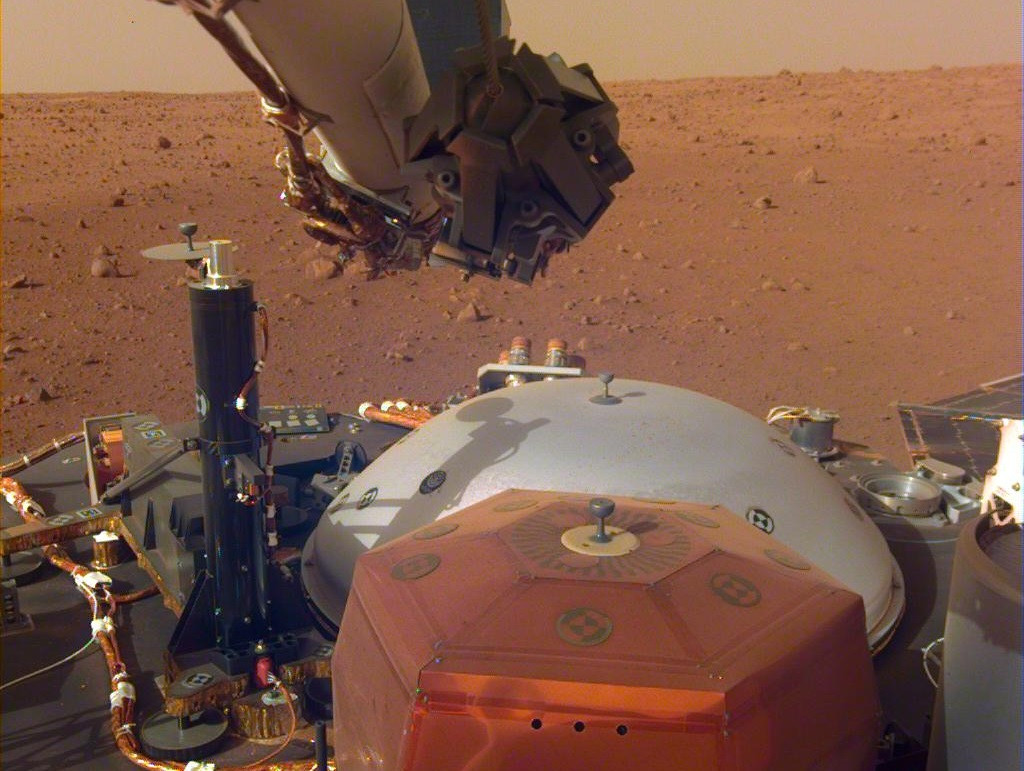 It’s been just over a week since the Insight rover became the latest American probe to land on the Martain surface, and it’s already provided us with something cool:

Before you listen, hook up a subwoofer or put on a pair of bass-heavy headphones. Otherwise, you might not hear anything.

That’s the sound of winds blowing across NASA’s InSight lander on Mars, the first sounds recorded from the red planet. It’s all the more remarkable because InSight — which landed last week — does not have a microphone.

Rather, an instrument designed for measuring the shaking of marsquakes picked up vibrations in the air — sound waves, in other words.

Winds blowing between 10 and 15 miles per hour over InSight’s solar panels caused the spacecraft to vibrate, and short-period seismometers recorded the vibrations.

“You can think of it rather in the same way as the human ear, how we in fact listen,” said Thomas Pike, a scientist at Imperial College London who is leading research with the instruments. “The solar panels are like the ear drum. The spacecraft structure is like the inner ear.”

The seismometers act as the cochlea, the parts of your ears that convert the vibrations into nerve signals. They are able to record vibrations up to a frequency of 50 Hertz — audible to human ears as a low rumble.

NASA also produced a version of the recording that lifted the sounds by two octaves.

“To me, the sounds are really unworldly,” Bruce Banerdt, the principal investigator of the mission, said during a news conference on Friday. “They do sound like the wind or maybe the ocean kind of roaring in the background. But it also has an unworldly feel to it.”

The two Viking landers that NASA sent to Mars in 1976 also carried seismometers that captured some wind noise. But Dr. Banerdt said those recordings were at much lower sampling rates and did not pick up anything at audible frequencies.

“Even though the Viking seismometer picked up what I would call motions of the spacecraft, I think it would be a stretch to call those sounds,” he said.

NASA sent microphones to Mars on the Mars Polar Lander spacecraft in 1999, which crashed during its landing attempt, and on the Phoenix Mars lander; that instrument was left turned off, however, because it could have caused problems during landing.

NASA’s next rover, to launch in 2020, will also carry a microphone.

This is not the first time sound has been recorded on another planet. Back in the 1980s, two Soviet spacecraft, Venera 13 and Venera 14, recorded sounds from the surface of Venus.

And Europe’s Huygens lander, which was carried to Saturn’s biggest moon, Titan, by the Cassini spacecraft, also sent back sounds picked up by a microphone.

You can listen to the sound clips below, or at the link. As noted, the sounds are generally easier to hear if you have a subwoofer attached to your computer or listen through headphones. However, the second clip has been enhanced so that anyone should be able to hear them: