THE ANGRY STREET: Reuters is reporting anti-war riots across the Arab world, Italy, Germany, and France. A rather odd combo, eh?

My rather limited experience in Egypt is that people there really like Americans and America. 5,000 people in the streets in Cairo isn’t exactly overwhelming. I suspect there are 5,000 Cairenes in Tahrir Square right now. It’s one teeming city. And they were, according to the article, essentially ordered to riot by the imams from the Religion of Peace.

How the Imams Terrorized an Airliner 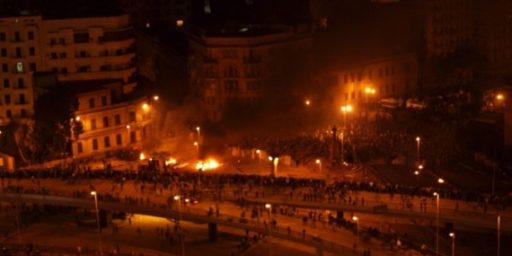 Violence Continues To Rage In Cairo

Hosni Mubarak Pleases Nobody, And Probably Fans The Flames Of Protest