Violence Continues To Rage In Cairo

Egypt entered a second day of chaos with all signs pointing to things getting worse before they get better. 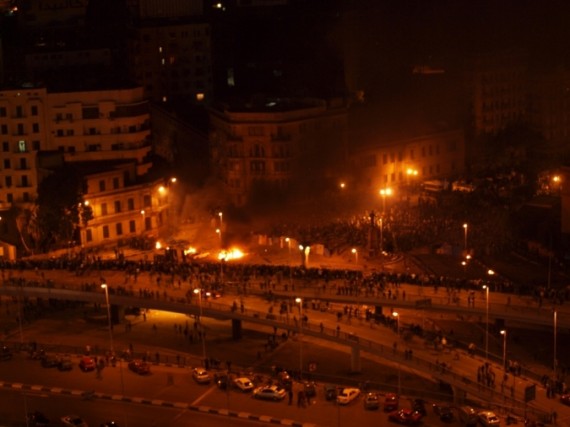 The government-backed crackdown on anti-Mubarak protests in Cairo entered its second day today:

There have been running battles near Cairo’s Tahrir (Liberation) Square between pro-democracy protesters and loyalists of Hosni Mubarak, Egypt’s embattled president.

Witnesses said that gunshots had rang out near the square, the epicentre of protests against Mubarak for the past 10 days.

An Al Jazeera correspondent, reporting from the scene, said it was not clear who was behind the firing.

There have been sporadic clashes throughout Thursday, as the army fanned out to separate the two sides and allowed thousands more protesters to enter their camp in the square.

Al Jazeera’s online producer in Cairo said: “The battle for downtown Cairo on Thursday has taken on an almost medieval quality, with protesters erecting makeshift barricades and building homemade catapults to launch rocks at each other.

“Close-range combat ensued for several hours, with hand-to-hand combat near the barricades erected by pro-democracy protesters. Both sides threw hundreds of rocks back and forth.”

Pro-democracy protesters gradually pushed back Mubarak loyalists who had swarmed onto a nearby highway overpass where they had been pelting their rivals with objects.

Our producer said: “The pro-democracy group began a slow advance onto the bridge, which had earlier been cleared of pro-Mubarak forces by an army tank.

“The pro-democracy crowd briefly lost its high ground … but they regrouped, and their counterattack eventually pushed the pro-Mubarak group down to the Corniche, where they are now slowly retreating past the state television building.

The newest target of the pro-Mubarak forces seems to be journalists from the West who are getting the story of what is happening out to the rest of the world:

CAIRO — The Egyptian government broadened its crackdown on Thursday to the international media and human rights workers, in an apparent effort to remove witnesses to the battle with anti-government protesters.

An informal center set up by human rights workers in the square was seized, and a group of journalists was stopped in their car near the square by a gang of men with knives and briefly turned over to the military police, ostensibly for their protection. Two reporters working for The New York Times were released on Thursday after being detained overnight in Cairo.

The concerted effort to remove journalists lent a sense of foreboding to events in the square, where battles continued between the protesters and the Mubarak supporters, who human rights workers and protesters say are being paid and organized by the government. People bringing food, water and medicine to the protesters in the square were being stopped by Mubarak supporters, who confiscated what they had and threw some of it into the Nile.

Just this morning, al-Jazeera and the BBC have both reported via Twitter that their journalists have been harassed by security forces, and The Washington Post reports that its Cairo Bureau chief and a cameraman have been arrested:

We have heard from multiple witnesses that Leila Fadel, our Cairo bureau chief, and Linda Davidson, a photographer, were among two dozen journalists arrested this morning by the Egyptian Interior Ministry. We understand that they are safe but in custody and we have made urgent protests to Egyptian authorities in Cairo and Washington. We’ve advised the state department as well.

For all the violence this morning, though, its nothing compared to what Richard Engel was cataloging last night as he reported live on MSNBC:

At this point, it seems likely that the chaos will only continue until a breaking point is reached. Tomorrow is Friday, traditionally a day for mass protests in the Muslim world. If the last two days are any indication, it could be very unpleasant.