The Lunacy of Iranian Sanctions

Daniel Larison makes an excellent point against those people who are now calling for increased sanctions against Iran:

This is madness. Have the current sanctions brought the regime anywhere close to its knees after decades? There is not a single example where economic sanctions actually compelled a non-democratic regime to change course on an internal political matter. We have no reason to believe that it will work. What we do know is that it will make average Iranians poorer. The nascent Iranian middle class that everyone is so pleased with will be impoverished, and their economic prospects will go from bad to worse. Causing a run on the rial would annihilate whatever savings average Iranians have and magnify their current inflation problem, which could have a political radicalizing effect and not one that we would find attractive. Tanking the Iranian economy would mean that unemployment shoots up even higher than the already miserable 20%+ that it is now.

Why would such an imposition of sanctions not allow the authorities to claim the mantle of nationalist resistance against international hostility? Milosevic held on for years longer than he would have been able to do otherwise because of the hostility towards Serbia that most of the world showed in the ’90s. Why would imposing extremely tight sanctions not put the protesters on the defensive and blunt their earlier criticism about Iranian economic grievances? As bad as the government’s mismanagement and corruption undoubtedly are, economic conditions can always get worse under tightened international sanctions, and the regime will be able to argue truthfully that conditions have worsened because of policies advanced by Washington.

Amen to that. I have never understood the perpetual popularity of economic sanctions as a means of “punishing” authoritarian regimes. It rarely has the desired effect. 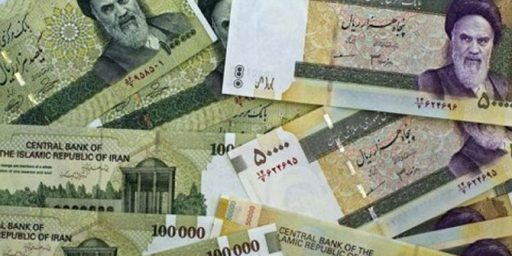 Iran’s Currency Has Collapsed. A Sign The Sanctions Are Working?