There is Something Fundamentally Wrong with Congress

There is a fundamental problem with the feedback loop in American politics.

As I have noted on multiple occasions, one of the most fundamental jobs of a national legislature is setting the budget.  The establishment of basic spending parameters for a given year, while complex (especially for a country the size of the United States) is not rocket science.  This is doublytrue when we consider, for good or for ill, that a substantial amount of the budget is effectively pre-set (i.e., entitlements* and interest on the debt).  The latest half-measures (and calling them “half-measures” is a kindness) regarding avoiding a showdown over the payroll tax cut (which still needs to pass the House), not to mention avoiding yet another possible government shutdown over lack of spending authority  simply underscores this situation all the more.  Indeed, as of this writing the measures have not passed both chambers, so they are not yet settled.

While one might point to partisan bickering as the main issue (or, worse, just assuming a “lack of leadership”) the fact of the matter is one would expect there to be partisan bickering in a legislature.  It is less that I expect everyone to get along and “do the people’s business” as much as I expect that governing institutions be designed in a way that they produce the results for which they were designed.  In the case of the Congress, there is no doubt that they have been charged, both in a theoretical and a practical, constitutional sense, with power and responsibility over the budget.

So, the question becomes:  what are the incentives put in place by the current institutional structures and, further, are there any factors within the functioning of Congress that impede adequate outcomes?**

This, of course, suggests a rather complex analysis (as multiple variables are in play).  Still, let me focus on one issue:  the electoral process.  As all of this leads me to a basic conclusion I have discussed before, and it is twofold:  there is fundamentally a problem with the feedback loop and, moreover, where the feedback loop works, it is supporting dysfunction.

1.  Congress is clearly not performing a basic function (the budget) and we further know that we have some serious issues that require addressing in terms of long-term issues of fiscal stability (both on the taxing and spending sides) and especially entitlement reform.   The prospects for seriousness any time soon on these issues appears grim, to be honest.

2.  The public, in general, is quite unhappy with the Congress.  Indeed, public approval of Congress is historically low.  Via Real Clear Politics: 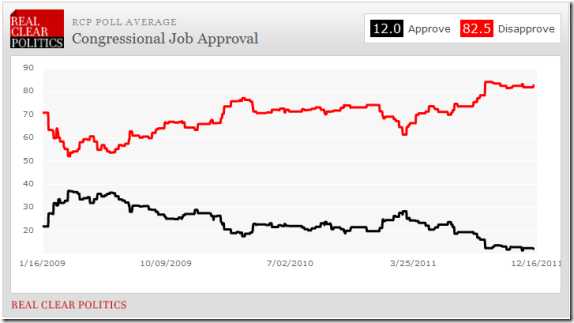 3.  And yet, we keep re-electing most members.  As Doug Mataconis noted the other day, the re-election rates for both chambers, especially the House, are phenomenally high.

There is a clear disconnect between the public’s view of Congress and the results of elections.  Yes, part of this is the phenomenon of “its pork when other members of Congress do it, but it is vital activity when my representative does it.”  But, I would argue that there is a more substantial disconnect here than that.

The bottom line is that the Congress doesn’t do a very good job of representing the population.  This is a problem if one values democratic governance.***  I am not sure how anyone can objectively look at the approval numbers, and then the re-election numbers, and not see a disconnect.  Also, it is worth nothing that while Congress is especially unpopular at the moment, it is generally the least popular institution of the federal government, historically speaking.

All of this leads to the conclusion that a major problem within the US at the moment is an antiquated electoral system, i.e., the uses of plurality winners in single member districts.  One of the fundamental problems of a single member district system is that it has a tendency to limit competition (by definition there is an incentive to form large, catch-all parties).  Moreover, when districts are drawn by partisan entities (e.g., state legislatures) you end up in a situation where the parties pick their voters.  This is an unhealthy situation for democratic governance, as the way the feedback loop is supposed to work is that voters pick the parties by selecting representatives in truly competitive elections.  Note, of course, this latter point only applies to the House, as Senate districts are state boundaries (and note while there is still remarkably high re-election rates in the Senate, the numbers are a bit more volatile over time).

This situation is exacerbated in the US by the usage of primary elections.  Consider:  if one lives in, say, a safe Republican district then the real competition in in the primary election, not the general election.  As a result, the member of Congress is really selected in the primary.  Primary elections are notoriously low-turnout affairs and also ones in which ideologically driven voters are more likely to participate and much more likely to sway outcomes than in the general election.  The combination of the safe district and the primary process for nomination leads to members who are likely not as representative of their districts as one might think.

Consider a very real political dynamic at the moment:  there is a severe anti-tax strain in the Republican Party at the moment (something that even a very conservative Senator, Tom Coburn, has noted) that makes legitimate debate and compromise more difficult.  Now, not only is this often a factor of principle (which I can respect, even if I think it misguided) it is also a function of electoral politics:  many GOP members know that they will face a primary challenge if they fail to follow through on a hardcore anti-tax agenda (ask, for example, Bob Bennett of Utah).  The bottom line is this:  many of these members of Congress are from safe districts, but they are not safe at the primary level.  A primary challenge can empower the most conservative elements of the party to nominate a candidate who is not representative of the district (and may not even be representatives of the Republicans in that district, given the turnout issues inherent in primaries) but said candidate will be a shoe-in for election because of the districting issue noted above.  This is not a healthy pattern for a system predicated on the notion of representation.****

Is this the only issue at the moment with the US Congress?  No, but one blog post at a time, I guess.  There is also, for example, the fact that the public itself isn’t sure what it wants, not to mention the problems of the filibuster, as well as the fact that federalism, bicameralism, and separation of powers all create their own difficulties for efficient policy-making.*****

Regardless:  I take the time to write this because first and foremost I think it identifies a real issue that needs scrutiny within the US public.  I am fully aware that the default position for most Americans is a combination of assumptions that the current system is fine (after all, we’ve always done it that way, the Founders!, etc.) and a total lack of understanding that there are a myriad of ways to elect legislatures.  At a minimum, I would advocate for greater awareness of the issue in the hopes of generating debate.  I will allow, by the way, that no set of electoral rules is perfect, but some clearly work better than others.  Nonetheless, just because something isn’t a panacea doesn’t mean it isn’t worthwhile.

To put it more succinctly:  I would like to see a national discussion to emerge on the topic of electoral reform.  And I think that the disconnect between congressional approval/performance and the re-election rates of its members demonstrates that such a discussion is not just something that theoreticians should be interested in, but rather is of serious practical significance.

*And yes, it is feasibly possible to redefine entitlements on a yearly basis, but the degree which it is a good idea is a whole other issue.  The bottom line is this on, say, Medicare:  once you have defined the benefit (i.e., in this case certain medical care for all people over a certain age) then the only real way to change it is to either a) change the nature of the benefit or alter the age of eligibility.  This really isn’t a practical process on an annual basis.

**I would define “adequate” in this case not to mean any specific budget outcome but, rather, simply a functional budget, i.e., the basic fulfillment of their responsibilities.

***And I am quite aware that not everyone does, in fact, value democratic governance because they prefer the morass of the moment over improved representativeness.

****After all, its even in the name of one of the chambers, the House of Representatives.  And, as we may all recall, part of the reason for seeking independence from the UK was, you know, taxation without representation.

*****And I do recognize that built in inefficiencies can have advantages—but it must also be acknowledged that they create disadvantages as well.