The murder of abortion doctor George Tiller has had its desired impact, the closing of one of the few clinics in the United States willing to provide late-term abortions.  Roxana Hegeman for AP:

The family of slain abortion provider George Tiller said Tuesday that his Wichita clinic will be “permanently closed,” effective immediately.  In a statement released by Tiller’s attorneys, his family said it is ceasing operation of Women’s Health Care Services Inc. and any involvement by family members in any other similar clinic. “We are proud of the service and courage shown by our husband and father and know that women’s health care needs have been met because of his dedication and service,” the family said.

Dr. Warren Hern, one of the few remaining doctors in the country who performs late-term abortions, said the closure of the clinic was an “outrage” and he feels the loss for Dr. Tiller’s family and the patients he served. “How tragic, how tragic,” Hern said when contacted by phone at his Boulder, Colo., clinic. “This is what they want, they’ve been wanting this for 35 years.”  Asked whether he felt efforts should be made to keep the clinic open, he said: “This was Dr. Tiller’s clinic. How much can you resist this kind of violence? What doctor, what reasonable doctor would work there? Where does it stop?”

An anti-abortion activist suspected in the death of Kansas doctor George Tiller told CNN on Tuesday the closing of Tiller’s women’s clinic is “a victory for all the unborn children.”

Scott Roeder, 51, would not admit to CNN’s Ted Rowlands that he killed Tiller, who was gunned down at his church May 31. But he said if he is convicted in Tiller’s slaying, “the entire motive was the defense of the unborn.”

Roeder said the closure would mean “no more slicing and dicing of the unborn child in the mother’s womb and no more needles of poison into the baby’s heart to stop the heart from beating, and no more partial-birth abortions.”

UPDATE: Matt Yglesias passes on word from Kate Klonick that Operation Rescue is going to make an offer to buy the office. 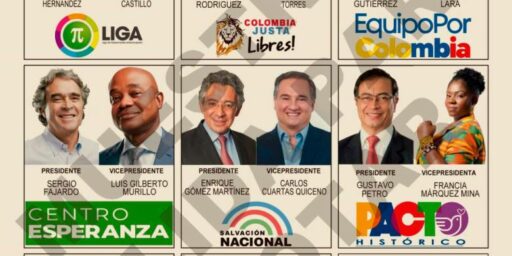 Round One in Colombia