For the second time in less than a week, Andrew Sullivan has handed out one of his positive awards to someone for whom a different and negative award was named.   This time, Michelle Malkin gets an Yglesias Award for calling the murder of George Tiller “terrorism.”   (For those who don’t keep up with such things, the Malkin Award is given for “shrill, hyperbolic, divisive and intemperate right-wing rhetoric.”)

Amusingly, while I join Malkin in condemning the murder of Tiller, I consider terming it “terrorism” to be rather hyperbolic.  Quite a few bloggers I read, especially those on the left, join her in using it.  Steve Benen, for example, argues “We’re dealing with an act of politically-motivated violence, against a law-abiding American on American soil, intended to scare, intimidate, and change U.S. policy.”

That’s not quite right.  While no universally accepted definition exists, Benen’s is as good as any.  But I’d argue that it constitutes a three-pronged test and that this murder falls short on one prong.   Yes, this act was politically motivated and designed to scare and intimidate.  But, while one hesitates to fathom what a deranged lunatic “intends,” but there’s no way a rational person, even an evil one, would think that murdering abortionists will change public policy.  Indeed, if anything, it’s likely to make people on the fence more sympathetic to abortion providers while putting reasoned critics of abortion on the defensive.

At best, this murder was intended to stop Tiller from providing services he was legally free to provide and to intimidate other current or would-be providers.  But that’s “terrorism” of the same sort carried out by the Ku Klux Klan or the Mafia and so far afield from what those who seek to overthrow governments or induce radical changes in public policy do as to require a different category.

UPDATE: An email from a colleague suggests the above needs clarification.  Obviously, many no-question terrorists — Timothy McVeigh and the 9/11 highjackers were offered as examples — kill with no sane hope of actually changing U.S. Government policy.   But that was at least their direct aim.   My presumption is that Tiller’s murderer was aimed at intimidating other would-be abortionists.

As for the KKK, they no doubt terrorized; I’m not sure that makes them “terrorists.” They’re just criminal scumbags.  Indeed, “terrorist,” like “assassin,” actually conveys some legitimacy in a way “murderer” does not. The former, after all, are fighting for something they believe in.

In terms of the Mafia, they conduct all manner of killings to “send a message” of some sort.  Generally, it’s not a political message, to be sure, but it’s intended to intimidate people who get in their way.

UPDATE 2: Thoreau largely dismisses the title question but makes an interesting point about the discussion.

I see plenty of downsides in letting the government treat terrorism as a special category that “regular” laws can’t address.  (For examples, see the past 8 years.)  So I’m fine with calling things by accurate and descriptive names in public discourse, but I see little advantage to having different laws for a special subset of murders.  There’s an important difference between what we say in open discussions and what we actually do in courtrooms.

Now, there may be a need for some sort of different treatment of terrorism in an international context, to distinguish a soldier attacking a military target under orders (these guys are normally accorded POW status) from a guy attacking a civilian target (these guys normally aren’t).  However, in the domestic context I see no need for a distinction.

That’s a fair point.  McVeigh was a terrorist but, more importantly, he was a mass murderer.  He was convicted and punished accordingly.

UPDATE 3: Ezra Klein argues that Congress should not let Tiller’s killer win by making late-term abortions harder to get.   Hilzoy agrees and lists several steps Congress should take.  Coincidentally, these are policy changes that they already favored. 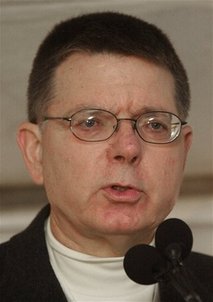