A former nuclear submarine officer is suggesting what seems at first glance like a rather unorthodox solution to the ongoing oil spill in the Gulf of Mexico:

For more than 100 years, explosives have been used to break the necks of runaway oil wells, snapping the long, narrow columns and sealing them shut with tons and tons of rock. Over the last several days, our 24-hour news cycle has pumped us full of excruciating details about the failed efforts to siphon, cap off, and ultimately recover the oil that is gushing into the Gulf. The latest nonsense and false hope, a mile-long pipe designed to divert some of the oil flow, is like putting a 4-inch straw into a 22-inch-diameter fire hose. It’s a sordid attempt by BP at drinking its own milkshake. But the problem with this disaster response is that the ideas BP has brought to the table all seem to ignore the simplest solution: permanently destroying the well.

BP is probably not equipped for this kind of demolition. However, there are two major organizations in the world that have highly developed skills at demolishing things—the U.S. and Russian militaries. On Thursday, my gut instinct for nuking shut the well was confirmed when CNN reported that the Soviet military had used nuclear explosives on four separate occasions, beginning in 1966, to seal off runaway oil and gas wells under water. The practice was well documented by the Lawrence Livermore National Laboratory, one of our nuclear-weapons facilities.

As Christopher Brownfield, the author of the piece, goes on to admit, though, using nuclear weapons in this context would pose some political problems for President Obama, and may be seen as a the equivalent of using a sledgehammer to kill a fly, so he also suggests an alternative:

[T]here could be be a third option that Obama might bring to the table, once we recognize that BP is just as concerned about salvaging its precious asset as it is about stopping the spill. Our military could potentially use a carefully placed combination of conventional explosives to collapse the well. Our technology is much better than that of the Soviet Union in 1966, so we should be able to make this work without having to go nuclear. I’m confident that the U.S. Navy, the Army Corps of Engineers, and some private-sector organizations could come together and make this happen. The only question is whether Obama will be bold enough to take charge of this problem at the risk of his presidency slipping down the deep, dark well.

I’m not enough of a weapons or engineering expert to know if this is really as viable an option as Brownfield makes it out to be, but as a last resort it’s certainly better than nothing. 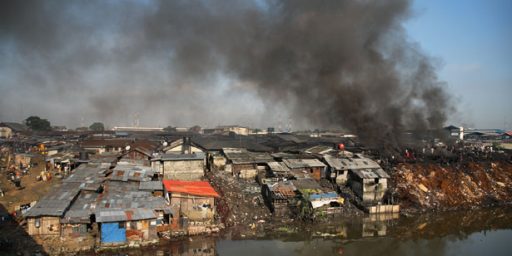