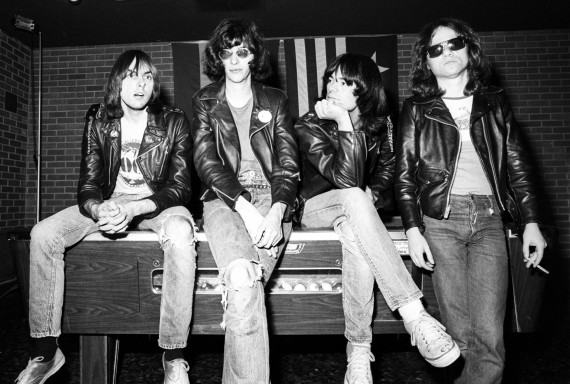 Tommy Ramone, who founded a group that had a big influence on music even though it never really achieved commercial or chart stardom, has died at the age of 65:

Tom Erdelyi, better known as Tommy Ramone, the founding drummer and last surviving original member of the Ramones, the New York band whose dizzyingly short blasts of melody codified the sound of punk rock, died on Friday at his home in Ridgewood, Queens. He was 65. The cause was cancer of the bile duct, his family announced. Of the original band, Joey Ramone (the singer) died in 2001, Dee Dee (the bassist) in 2002 and Johnny (the guitarist) in 2004.

Mr. Erdelyi played only on the band’s first three albums, “Ramones” in 1976 and “Leave Home” and “Rocket to Russia,” both from 1977. And he cut a much more easygoing figure than his bandmates, who despite their fraternal stage names were notorious for internecine feuds. Yet Mr. Erdelyi played a crucial role in the sound and early development of the band, which originated among high school friends from Forest Hills, Queens.

When the group first came together in 1974, Mr. Erdelyi, who had some experience in the music business as a recording engineer, was the manager. Equally in love with hard rock’s buzz saw guitar and the sunny clarity of 1950s and ’60s radio pop, the four men dressed in leather jackets and ripped jeans like B-movie juvenile delinquents, and opposed the mellow singer-songwriters and opulent progressive rock that then dominated pop.

In the band’s earliest incarnation, Joey — real name Jeffrey Hyman — was the drummer. But once it was discovered that Joey had the most capable singing voice, he moved to lead vocals.

“We started auditioning drummers, but they just couldn’t grasp the concept of the band — the speed and simplicity,” Mr. Erdelyi said in a 2011 interview with the website Noisecreep.

“So I’d sit down and show them what we were looking for and the guys just finally said, ‘Why don’t you do it?’ So I gave it a try and that’s when the sound of the band sort of solidified.”

In songs like “Beat on the Brat” and “Now I Wanna Sniff Some Glue,” the nascent Ramones compressed nursery-rhyme chords into adrenalized blares, and seemed to satirize the very ideas of teenage boredom and cheap kicks. Playing regularly at the East Village bar CBGB, the band charged through every song, pausing only long enough between them for Dee Dee to shout, “One, two, three, four!”

Official songwriting credits were shared by the full band. But Mr. Erdelyi was the primary author of several of its early classics, including “Blitzkrieg Bop,” which opens the first album with the chant “Hey ho, let’s go!” and features lyrics that boil teenage angst down to its most basic and kinetic:

What they want, I don’t know

They’re all revved up and ready to go

The Ramones, who were inducted into the Rock and Roll Hall of Fame in 2002, remain one of the quintessential rock groups whose influence far exceeded its original record sales.

The group’s debut LP, which Rolling Stone magazine has ranked the 33rd greatest album of all time, peaked at No. 111 on Billboard’s album chart. In April, 38 years after its original release, it was certified gold by the Recording Industry Association of America, recognizing that it had finally sold at least 500,000 copies.

I can’t say I was huge Ramones fan growing up, but I was exposed to their music through friends and it was certainly different, and fresher, than most of what was passing for popular music in the late 70s and early 80s. Of course, it’s probably the fact that it was so different that was behind the reason that large scale commercial success never came for the group.