President Trump called on Senate Republicans to eliminate the legislative filibuster to resolve the government shutdown. That's not going to happen. 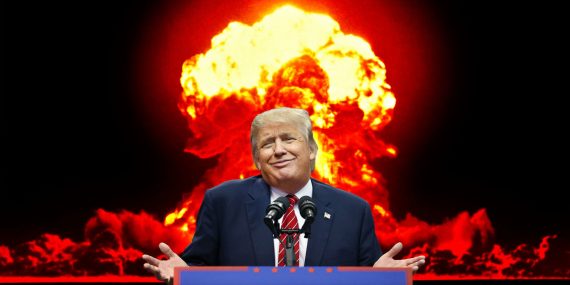 As the Federal Government shutdown entered its second day, President Trump took to Twitter to say that he believed that Senate Republicans should eliminate the legislative filibuster to get around the fact that they can’t get the current Continuing Resolution, or any replacement bill, passed without support without support from at least some members of the Senate Democratic Caucus:

The White House on Sunday called for Senate Republicans to change the chamber’s rules to resolve the funding impasse as the government shutdown continued into its second day.

“Great to see how hard Republicans are fighting for our Military and Safety at the Border. The Dems just want illegal immigrants to pour into our nation unchecked. If stalemate continues, Republicans should go to 51% (Nuclear Option) and vote on real, long term budget, no C.R.’s!” Trump tweeted.

White House budget director Mick Mulvaney said on CNN’s “State of the Union” that eliminating the filibuster would be one avenue they back to ending the shutdown.

“There’s a bunch of different ways to fix this,” Mulvaney said. “We just want it to get fixed.”

Senate rules impose a threshold of 60 votes to break a filibuster, and Senate Republicans currently hold a slim majority of 51 votes, meaning even if they can unite their members, they need nine more votes to end debate. The White House is calling for the Senate to change its rules and move the threshold to a simple majority of 51 votes.

Eliminating the 60-vote threshold to break a legislative filibuster would remove significant powers for the minority party in the Senate, and party leaders have been reluctant to do so in the past because of the consequences it would pose when their party returns to the minority.

Democratic Sen. Chris Coons of Delaware responded to the President’s tweet on “Fox News Sunday,” suggesting it was unproductive.

“This is another example of President Trump throwing a tweet in the middle of bipartisan negotiations that are making progress,” Coons said. “I think Senator McConnell, the Republican majority leader, in the end will have much more to say about how the Senate is run.”

Senate Minority Whip Dick Durbin of Illinois said on ABC’s “This Week” that eliminating the 60-vote threshold “would be the end of the Senate as it was originally devised and created going back to our Founding Fathers.”

“We have to acknowledge our respect for the minority,” Durbin said.

Mulvaney offered that another way to end the shutdown, from their point of view, would be for enough Democrats to cross the aisle and give the GOP the votes it needs to restore funding.

He noted that the White House has been “critical” of the 60-vote threshold to overcome filibusters since Trump took office.

Great to see how hard Republicans are fighting for our Military and Safety at the Border. The Dems just want illegal immigrants to pour into our nation unchecked. If stalemate continues, Republicans should go to 51% (Nuclear Option) and vote on real, long term budget, no C.R.’s!

Which is similar to previous tweets he has sent on the issue:

The reason for the plan negotiated between the Republicans and Democrats is that we need 60 votes in the Senate which are not there! We….

either elect more Republican Senators in 2018 or change the rules now to 51%. Our country needs a good “shutdown” in September to fix mess!

The U.S. Senate should switch to 51 votes, immediately, and get Healthcare and TAX CUTS approved, fast and easy. Dems would do it, no doubt!

With the ridiculous Filibuster Rule in the Senate, Republicans need 60 votes to pass legislation, rather than 51. Can’t get votes, END NOW!

House Republicans are taking much the same position:

House Republicans say Senate Democrats are holding government funding “hostage” to their demands on immigration. And they’ve got an idea for ending the crisis: Throw away the filibuster.

The legislative tool of the minority is one of the few remaining things that distinguish the Senate from the House. House Republicans, later joined by President Donald Trump, are putting pressure on their Senate GOP colleagues to pursue the so-called nuclear option — change chamber rules and end the legislative filibuster, at least on spending bills.

“If a majority is good enough in the House and a majority would have kept government from shutting down, I think that’s a whole case the American public would say, ‘That’s a responsible way to govern,'” House Majority Leader Kevin McCarthy told Roll Call Saturday.

Asked if he thinks Senate Majority Leader Mitch McConnell would consider ending the legislative filibuster — coming on the heels of recent rules changes to lower the threshold to advance executive and judicial nominees by a majority only — McCarthy said, “That’s a question for Mitch.”

This isn’t the first time that President Trump, the White House, and House Republicans have called on the Republican-controlled Senate to eliminate the legislative filibuster in the face of a seeming logjam caused by Democrats using the cloture procedure to block Republican legislation. He has made the call several other times during his Presidency, such as during the debate over health care reform in the spring when it was apparent that the Republican Senate would face problems moving forward with its version of a bill to ‘repeal and replace’ the Affordable Care Act. At that time, of course, the call was rather pointless since the Senate was proceeding under budget reconciliation rules that bypassed the cloture procedure and would have allowed them to pass a bill with a simple majority. In that case, the problem wasn’t a lack of Democratic support but the fact that McConnell could not get his entire caucus united behind a bill despite trying on three separate occasions from May to September to do so. Trump renewed the call to eliminate the legislative filibuster in September as Congress began to take up consideration of the tax bill that was ultimately passed in December. Once again, that call was mooted by the fact that the Senate ended up utilizing the reconciliation process to pass the tax bill.

In the midst of each of those past calls for an end to the filibuster, Senate Majority Leader Mitch McConnell has shot down the idea — see here and here — and it’s also been apparent based on interviews with other Republican Senators that there is no support among upper chamber Republicans for doing so. The response to today’s call from Trump to eliminate the filibuster was much the same:

“The Republican Conference opposes changing the rules on legislation,” a representative for McConnell said in a statement Sunday morning.

The remark came not long after Trump, in a tweet, urged Republicans in the Senate to use the tactic, which would only require a simple majority to pass a long-term spending plan. As it stands, the GOP needs to garner at least some Democratic support to overcome a filibuster.

McConnell has repeatedly opposed using the tactic, which would scrap a potential filibuster meant to hold up votes, when it comes to legislation. The fear is that, if Democrats regain control of Congress and the White House, they could dramatically reshape policy.

Republicans currently hold a 51-49 edge in the Senate.

Republicans did take steps to limit the filibuster last year, of course, when they used the so-called nuclear option to eliminate the requirement that Supreme Court nominations receive sixty votes in order confirm Associate Justice Neil Gorsuch to the Supreme Court. That move, however, was little more than the logical conclusion of the move that Senate Democrats had made in November 2013 when they were in the majority to eliminate the sixty-vote rule for Presidential appointments to Executive Branch positions and the District Courts and Circuit Courts of Appeal. Beyond that, though, it has always been clear that there was not sufficient support among Senate Democrats to eliminate the sixty-vote rule for legislation, and there’s absolutely no sign that this has changed over the course of the past year. In addition to McConnell, who is really the most important player here since any move to utilize the nuclear option as Trump is calling for would have to be done by him, numerous other Republican Senators, including veterans such as Lindsey Graham, John McCain, and Orrin Hatch and newcomers to the Senate who have been elected as recently as the 2014 midterms, have gone on the record to say that they would oppose any measure to accomplish what the President and House Republicans are suggesting. In no small part, of course, is because these Senators all understand that the consequences of eliminating the filibuster would be to drastically undercut the ability of a Senate minority to influence the legislative process and have first-hand knowledge of the fact that they could easily end up being in the minority as soon as the next midterm election. This is especially true given the fact that the GOP’s majority in the upper chamber is now down to a slim 51-49, and is effectively actually at 50-49 given the absence of Senator McCain, an absence that currently appears as if it will be a long-term reality.

Because of all that, this latest call from the President will fall on deaf ears just as his previous calls did.

Alito, the Nuclear Option, and the Gang of 14