It wasn't a Thermonuclear move, more like something the size of Hiroshima, but today the Senate took an historic move nonetheless. 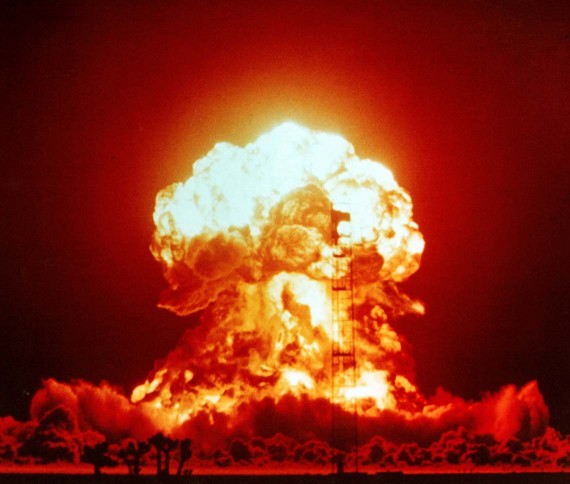 As has been threatened several times over the past several years, the U.S. Senate employed the simple majority of Democratic control to enact a change in Senate rules that will limit the ability of Senate minorities to block certain nominees from being considered on an up-or-down vote:

WASHINGTON — The Senate voted on Thursday to eliminate the use of the filibuster against most presidential nominees, a move that will break the Republican blockade of President Obama’s picks to cabinet posts and the federal judiciary. The change is the most fundamental shift in the way the Senate functions in more than a generation.

The vote was one that members of both parties had threatened for the better part of a decade, but had always stopped short of carrying out. This time, with little left of the bipartisan spirit that helped seal compromises on filibuster rule changes in the past, there was no last-minute deal to be struck.

Senator Harry Reid, the majority leader, set the change in motion on Thursday with a series of procedural steps.

“The need for change is so, so very obvious. It is clearly visible,” Mr. Reid said as the Senate convened Thursday morning. “It is time to get the Senate working.”

After the vote on the filibuster rules, Mr. Reid said he would not gloat. “This is not a time for celebration,” he said.

On that, but little else, Republicans agreed. Senator John McCain, Republican of Arizona, said the changes marked a “devastating” breach of Senate procedure.

“Now there are no rules in the United States Senate,” he said.

Senator Mitch McConnell, the Republican leader, denounced Democrats for trying to “break the rules to change the rules” as a way to distract the public from the president’s political problems over his health care law.

“You think this is in the best interest of the United States Senate and the American people?” Mr. McConnell asked, sounding incredulous. “I say to my friends on the other side of the aisle, you’ll regret this. And you may regret it a lot sooner than you think.”

The gravity of the situation was reflected in a highly unusual scene on the Senate floor: Nearly all 100 senators were in their seats, rapt as their two leaders debated.

Tensions between the two parties have reached a boiling point in the last few weeks as Republicans repeatedly filibustered Mr. Obama’s picks to the country’s most important appeals court, the United States Court of Appeals for the District of Columbia Circuit. The Senate has voted on three nominees to the court in the last month. Republicans have blocked them all, saying they would allow the president no more appointments to that court.

Democrats, who filibustered their own share of Republican judicial nominees before they took control of the Senate, have said that what the minority party has done is to effectively rewrite the law by requiring a 60-vote supermajority threshold for high-level presidential appointments. Once rare, filibusters of high-level nominees are now routine.

With the appeals court left with a bench of just eight full-time judges — there are 11 full-time seats — Democrats argue that Republicans are denying Mr. Obama his constitutional powers to appoint judges and reshaping the nature of the federal judiciary.

Senate Majority Leader Reid didn’t waste time using the new rule to push forward nominations that Republicans had previously been able to block under the 60-vote rule that had been in effect today, including, so far, the nomination of one of the three nominees to the D.C. Circuit Court of Appeals that had been blocked in the past month which served as the impetus for this move. It’s also expected we’ll see it used to push forward other Executive Branch nominations such as the nomination of Congressman Mel Watt to head the Federal Housing Finance Agency. It’s important to note, though, what this rule change doesn’t impact. For one thing, it does not apply to nominees to the U.S. Supreme Court, and it doesn’t apply to legislation of any kind. Additionally, it would appear that the rule change would not impact the ability of a Senator or Senators to place a hold on individual nominees, or that it would change the number of votes necessary on the floor of the Senate to release that hold. It seems obvious that Reid chose to omit these matters from the Rules change in order to ensure that he could obtain the 51 votes necessary to pass his motion, especially since as it was he lost three Senators on the vote (Michigan’s Carl Levin, Arkansas’s Mark Pryor, and West Virginia’s Joe Manchin)

How you feel about today’s developments largely depends on where you sit politically, of course. The immediate reaction from Senate Republicans, as partly noted in the quoted text above, has been essentially a warning to Senate Democrats that they have set a precedent that the GOP would fully intend to take advantage of when they day comes that they regain control of the Senate and the White House (or even just the Senate). Indeed, even now there are plenty of things that Republicans could do to slow down the business of the Senate such as making interlocutory motions and refusing to agree to unanimous consent requests that require the majority to proceed under the slower moving “regular order.” Outside of the Senate, the reaction is about what you’d expect to. Bloggers and pundits on the left who have long been arguing in favor of filibuster reform, such as Ed Kilgore, Kevin Drum,  Ezra Klein, and Greg Sargent are obviously quite pleased with even this limited to change to a rule that they’ve been opposed to for some time now, at least since Barack Obama has been President that is. On the right, much of the reaction right now seems to be limited to pointing out the rather obvious hypocrisy on this issue that we’re seeing from Democratic Senators who were on the exact opposite side of this issue when George W. Bush was President, something which both Jennifer Rubin and Allahpundit point out.

As for my own point of view, I’ve said here many times before that I thought that filibuster reform of some kind was both necessary and proper. This seemed to be especially true when it comes to Presidential appointments to the Executive Branch since, as a general rule, I believe that President’s should be permitted to have as their principal advisers and assistance the people that they select unless there is something wrong with the nominee on a professional or personal level. Things are a little more complicated, though, when it comes to judicial appointments. Given that appointments to the Federal Judiciary are lifetime appointments, the vote that each nominee receives in the Senate is, in the end, the one and only opportunity that an elected branch of government will have for oversight over them. For that reason, I can see an argument for allowing a Senate minority to apply more scrutiny to these nominees than to, say, a nominee to a Cabinet Department or Federal Agency, most of whom will be subject to significant Congressional oversight and not be in office longer than the term of the current President in any case. It’s also worth noting that, notwithstanding the block placed against the three nominees to the D.C. Circuit, most of the judicial nominees that President Obama has sent to the Senate have been confirmed rather easily, and the most of the nominees at the Federal District Court level have been confirmed unanimously or nearly unanimously. Personally, I would have preferred to see the 60 vote rule stay in place for Circuit Court nominees as it has for the Supreme Court, but obviously Senator Reid realized he had the votes to extend it that far. .

As I noted above, the biggest question going forward is what today’s developments do to that ephemeral Senate goal of “comity,” which allows the body to move forward at times without having to comply with all of its more complicated rules. In addition to the holds and lack of unanimous consent that I noted above, Senate Republicans could also force Reid to strictly comply with Senate rules that are normally waived, such as those dealing with the actual reading of the text of bills, something which would considerably slow the ordinary business of the Senate down. Now, some will argue that the GOP couldn’t possibly make things move slower in the Senate than they already do, but that may not necessarily be the case, and it seems unlikely that Reid would have sufficient support in his caucus for the kind of wholesale rewriting of the rules that would be required to deal with those efforts. So, with the Senate Democrats having made their choice and voted in without consultation with the minority a rules change that could come around to bite them in the future when they are in the minority, we’ll have to just sit back and see what the consequences will be. It could all end up being very entertaining, if you’re into legislative battles that is.