Trump's attempt to fix the balance of trade will almost surely end up leaving us all worse off.

The hallmark of a good economist is to see that which is not seen. This was the topic of Frederic Bastiat’s essay, “That Which is Seen, and That Which is Not Seen” first published in 1850.

In the department of economy, an act, a habit, an institution, a law, gives birth not only to an effect, but to a series of effects. Of these effects, the first only is immediate; it manifests itself simultaneously with its cause — it is seen. The others unfold in succession — they are not seen: it is well for us, if they are foreseen. Between a good and a bad economist this constitutes the whole difference — the one takes account of the visible effect; the other takes account both of the effects which are seen, and also of those which it is necessary to foresee. Now this difference is enormous, for it almost always happens that when the immediate consequence is favourable, the ultimate consequences are fatal, and the converse. Hence it follows that the bad economist pursues a small present good, which will be followed by a great evil to come, while the true economist pursues a great good to come, — at the risk of a small present evil.

The first example that Bastiat gives of this phenomenon is the broken window fallacy. Bastiat correctly points out that while it seems like the young lad breaking the window creates economic activity this is highly misleading in that the money that is spent on the window would have likely been spent on some other good. If the cobbler was going to spend the money on buying more materials for fixing/making shoes, now he cannot as he has spent the money on a broken window. Thus, there is no net gain in terms of economic activity.

The same can be said about President Trump. Trump has withdrawn from the Trans Pacific Partnership under the belief that it would have cost jobs. Lowering of trade barriers will change the patterns we observe in terms of business and exchange. However, also very likely that retaining those barriers will prevent new jobs from being created. Take for example, this story in the Dallas Morning News, It’ll be ‘Brexit times 100,’ disaster for Texas, if Trump makes good on trade promises. Down near the bottom we find this,

Richard Thorpe, president of the Texas and Southwestern Cattle Raisers Association, said that the group was “very, very, very supportive” of Obama’s TPP.

Nationally, he said, cattle ranchers export about 13 percent of their animals. And of that, more than $1.6 billion worth was in sales to Japan, where an appetite for beef makes the country a tantalizing market.

The agreement would have lowered tariffs — or taxes on American-raised cattle sold in Japan — from 38.5 percent to 9 percent, Thorpe said.

Reducing the tariffs to U.S. Beef would undoubtedly result in more U.S. beefing being exported to Japan and would help the U.S. balance of trade. This would mean more jobs in cattle ranching, meat packing, and the logistics to move the beef from Texas to Japan. Now, because the U.S. has withdrawn from TPP it is unlikely these jobs will materialize. But Trump and his administration will not notice because they appear to be incapable of reasoning in this way.

Yes, it is possible that TPP would also cost jobs. If another industry is more efficient in Japan or some other country participating in TPP, then with the reduction in trade barriers production would shift to the most efficient country. But even that is not simply a cost like Trump and his administration claim.

Yes, this is not a nice and neat process. Some people in the adversely affected industries will adapt and move on. Others will be less capable of adapting. But setting policy to protect the jobs of those who cannot adapt places the burden on pretty much everyone else. And trying to “Make America Great Again” by propping up inefficient industries via indirect subsidies is not going to work. It will make American poorer over time, not better off. And this process of job creation and destruction is not limited to just trade between countries. Technological advancement destroys quite a few more jobs than trade. Mechanization of farming has probably destroyed millions of jobs, if not tens of millions of jobs. Around 1900, about 40% of the working population worked in agriculture. Now it is about 2%. Did all those jobs go to China or Japan or some other country? Hardly, the U.S. still produces massive amounts of food. All those jobs moved to a country called Productivity Gains.

So why should jobs lost to trade be treated any differently than jobs lost to productivity gains or changes in consumer preferences. After all, it used to be fashionable for men to wear hats when going out. But sometime after WWII that fashion changed. Now some men wear hats, usually baseball style caps, but the days of the fedora are gone….and with it all of the jobs in that industry. Why are those workers any less deserving of help than the guy whose job has gone over to China or Indonesia or Mexico?

The point is the economy is really more of a process. A process that is not unlike evolution. That as new technology comes along, changes in preferences, and other innovations, firms come and go, industries rise and fall and things change. And it is hard to determine how things will change ex ante. What will be the next cost saving innovation for say, bulk retailers? Don’t worry, that is a rhetorical question. There are lots of potential answers, but picking the winner ahead of time is not easy. If it were easy, we’d all know what the answer is. Trying to stop this evolutionary process in the economy is foolhardy. Trying to set up institutions and ways to help people deal with these changes is likely a better strategy than trying to stop the process dead in its tracks. And that is what Trump is trying to do and we’ll end up being poorer for it. 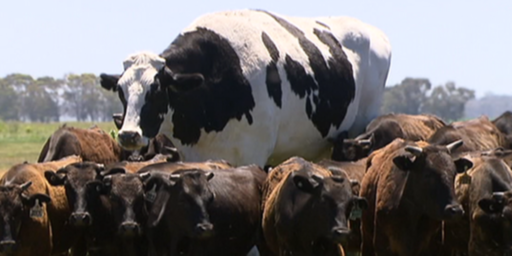