Turkey Refusing to Fight ISIS Right on Its Border

A massacre is about to unfold "a stone's throw" from Turkey's border. 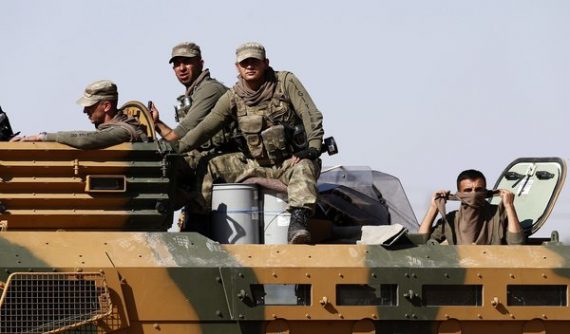 A massacre is about to unfold “a stone’s throw” from Turkey’s border.

As fighters with the Islamic State bore down Tuesday on the Syrian town of Kobani on the Turkish border, President Obama’s plan to fight the militant group without being drawn deeper into the Syrian civil war was coming under acute strain.

While Turkish troops watched the fighting in Kobani through a chicken-wire fence, Turkey’s president, Recep Tayyip Erdogan, said that the town was about to fall and Kurdish fighters warned of an impending blood bath if they were not reinforced — fears the United States shares.

But Mr. Erdogan said Tuesday that Turkey would not get more deeply involved in the conflict with the Islamic State unless the United States agreed to give greater support to rebels trying to unseat the Syrian president, Bashar al-Assad. That has deepened tensions with President Obama, who would like Turkey to take stronger action against the Islamic State and to leave the fight against Mr. Assad out of it.

Mr. Erdogan has also resisted pleas to send his troops across the border in the absence of a no-fly zone to ward off the Syrian Air Force.

Even as it stepped up airstrikes against the militants Tuesday, the Obama administration was frustrated by what it regards as Turkey’s excuses for not doing more militarily. Officials note, for example, that the American-led coalition, with its heavy rotation of flights and airstrikes, has effectively imposed a no-fly zone over northern Syria already, so Mr. Erdogan’s demand for such a zone rings hollow.

“There’s growing angst about Turkey dragging its feet to act to prevent a massacre less than a mile from its border,” a senior administration official said. “After all the fulminating about Syria’s humanitarian catastrophe, they’re inventing reasons not to act to avoid another catastrophe.

“This isn’t how a NATO ally acts while hell is unfolding a stone’s throw from their border,” said the official, who spoke anonymously to avoid publicly criticizing an ally.

For Mr. Obama, a split with Turkey would jeopardize his efforts to hold together a coalition of Sunni Muslim countries to fight the Islamic State, also known as ISIS or ISIL. While Turkey is not the only country that might put the ouster of Mr. Assad ahead of defeating the radical Sunnis of the Islamic State, the White House has strongly argued that the immediate threat is from the militants.

But if Turkey remains a holdout, it could cause other fissures in the coalition. It is not only a NATO ally but the main transit route for foreigners seeking to enlist in the ranks of the Islamic State.

Ultimately, American officials said, the Islamic State cannot be pushed back without ground troops that are drawn from the ranks of the Syrian opposition. But until those troops are trained, equipped and put in the field, something that will take some time, officials said, Turkey can play a vital role.

This is a fascinating but hardly surprising standoff.  Yes, Turkey’s demands are frustrating, in that they’re a transparent sham.  But they thinly disguise a complicated reality that all parties surely understood upon undertaking this campaign.

First, as a predominately Sunni Muslim country, Turkey is in a rather unique position, simultaneously fearful of ISIS’ brutality and contagion effect and yet seeing it as the enemy of its enemy in both the Syrian civil war and the larger regional Sunni-Shiite fight.

Second, given that no other NATO ally—notably and pointedly including its big kahuna, the United States—is willing to commit ground forces to fight ISIS or stop this potential massacre, it’s rather rich to criticize Turkey for taking the same position.

The bottom line, as even President Obama tacitly admitted when he launched this operation, is that ISIS is too well entrenched to be defeated from the air. Quite reasonably, he believes that outcome is not worth the risk of sending in American ground combat troops—which, incidentally, could well be self-defeating, serving as a rallying cry for Islamists in the way the Iraq invasion did. From the beginning, he called for regional forces—he specified the Iraqis, Kurds, and moderate Syrians but hoped others would join in as well—to do the fighting. Thus far, though, it looks like the Kurdish Peshmerga are the only ones who are both willing and able and, as we all knew going in, there aren’t enough of them.

Inevitably, then, calls from the usual circles for the president to reverse himself of sending in American troops will intensify. I fully expect him to demur. But that leaves us with a halfway policy of modest containment. Given the dearth of good options, that’s likely where we’ll be for the foreseeable future.