The United States and Russia have reached an agreement to end fighting in Syria, but it seems unlikely to succeed given that it doesn't involve the parties actually doing the fighting. 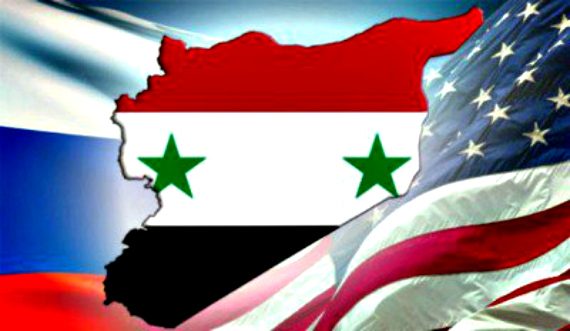 The United States and Russia announced an agreement to reduce fighting in Syria today, but there seem to be many questions about just how likely it is that this agreement will succeed where so many others have failed:

GENEVA — Russia and the United States agreed early Saturday on a new plan to reduce violence in the Syrian conflict that, if successful, could lead for the first time to joint military targeting by the two powers against Islamic jihadists in Syria.

The agreement was reached after 10 months of failed attempts to halt the fighting and of suspended efforts to reach a political settlement to an increasingly complex conflict that began more than five years ago.

The conflict has left nearly half a million people dead, created the largest refugee crisis since World War II and turned Syria into a prime incubator of recruiting for the Islamic State and the Nusra Front, an affiliate of Al Qaeda.

Secretary of State John Kerry and his Russian counterpart, Sergey V. Lavrov, announced the agreement in Geneva after weeks of negotiations that were marred, in President Obama’s words, by deep “mistrust” between the Russians and Americans, who back opposite sides in Syria, but share an antipathy to the Islamic jihadists flourishing there.

It came at a time when relations between the United States and Russia, which have worsened throughout much of the Obama administration, have been especially jolted by accusations of Russian hacking and subterfuge in American politics. The tensions have been further exacerbated by the effusive praise for President Vladimir V. Putin of Russia by the Republican presidential nominee, Donald J. Trump.

The new arrangement on Syria, set to begin Monday, was greeted with skepticism by Syrians on all sides and carries many risks of failure, which the Pentagon and Mr. Kerry acknowledged. “No one is basing this on trust,” he said. “We are basing it on oversight and compliance.”

The plan starts with a seven-day continuous “genuine reduction of violence,” in Mr. Kerry’s words, and broad, unrestricted humanitarian access to the ravaged northern city of Aleppo and other besieged areas.

If that works, the United States and Russia are to establish a Joint Implementation Center, where they will share targeting data, and begin to coordinate bombing of militants of the Nusra Front and the Islamic State.

The key element is that Russia must then restrain the forces of President Bashar al-Assad of Syria from conducting any air operations over areas held by Nusra and other opposition forces. The United States hopes this will end the indiscriminate dropping of barrel bombs — including chlorine gas attacks — that have punctuated the conflict.

In return, the United States is to persuade the opposition groups it has been supporting to separate themselves from the Nusra forces. Mr. Assad has attacked many of them on the pretense of attacking Nusra fighters.

American officials expressed strong reservations about whether this new arrangement would work. Especially skeptical was the Pentagon, long suspicious of Russian intentions in Syria, since the Kremlin first deployed military forces there to help Mr. Assad a year ago.

Defense Secretary Ashton B. Carter was among Obama administration officials who raised questions over whether either Russia or the Assad government would comply with the terms.

Mr. Kerry’s announcement of the deal, Mr. Lavrov at his side, was permeated with caveats.

“We believe the plan, if implemented, if followed, has the ability to provide a turning point, a change,” he said. But he sounded far more cautious here than he did in Munich in February when he announced an earlier “cessation of hostilities” that failed

The biggest reason to doubt that this plan will succeed is, of course, the fact that it doesn’t really appear to bind the actual players in the Syrian civil war themselves, but rather was reached between the U.S. and Russia in the hope that the two major powers would be successful in persuading their respective allies to comply with the terms of an agreement that they had essentially no voice in drafting. Instead, it appears that the hope is that the Russians can persuade the Syrian government to comply with the agreement’s limitations on its ability to act against the rebels seeking to overthrow it and that the United States can persuade it’s ostensible allies, the so-called “moderate” Syrian rebels to do the same. Given the fact that previous efforts to end the civil war that did involve these parties directly were unsuccessful, it’s unclear why anyone believes that an agreement that doesn’t involve them at all has any better chance at success. In the end, any such success depends on both the good intentions of the principals to the agreement and their ability to control the actions of their clients, and both are in doubt in this situation.

From the beginning, it’s been obvious that the Russians are acting in Syria primarily for their own benefit, for example, so it’s unclear how committed they are to actually restraining the Assad regime from defending itself in the current war. Indeed, all of Moscow’s actions in Syria to date suggest that they have little concern about either restraining Assad or actually targeting the Islamic extremists that they claim to be targeting. Instead, they’ve concentrated their attacks on those elements of the rebellion that have been the greatest threat to Damascus and generally acted as an adjunct to Bashar Assad’s own air force. The idea that they have changed their strategy on a dime is hard to believe. Even if the Russians are acting out of genuine concern here, there’s little guarantee that the Assad government is going to all that eager to listen to what Moscow has to saw. Similarly, there’s good reason to believe that the United States will have significant trouble convincing it’s ostensible allies in the rebellion to abide by an agreement they had no part in drafting:

Among the Syrians, the latest plan was greeted with wariness, particularly from armed opposition groups and their supporters, who, broadly speaking, have come to believe that the United States has lost interest in ousting Mr. Assad, and is willing to see them wiped out.

It is a measure of how little trust the Syrians have in the international community — especially after the short-lived cease-fire in February — that initial reactions were lukewarm, even though the deal holds out the possibility of at least a temporary calming of the violence.

Armed opposition groups read the deal as ordering them to remove better-armed Nusra fighters from their areas, something they lack the military power to do alone, or else face attack by the United States — a country that has provided some of the rebel groups with training and weapons for years.

Some government opponents noted that the deal came hours after Syrian military forces — with Russian air support — re-established their siege of the rebel-held sections of Aleppo.

While Mr. Kerry began his announcement by noting that Mr. Assad’s airstrikes were, as he put it, “the main driver of civilian casualties and migration flows,” the deal — as partly described — contains many loopholes that could allow them to continue.

And no measures were described that would hold any of the parties to account if they violated the terms of a deal that is being struck at a time when the United States has little leverage over Russia in Syria.

With no agreement from the parties actually involved, and no way to hold anyone to account for breaking the deal, there’s little reason to believe that this agreement will succeed in ending this seemingly endless war any more than any of the previous agreements have.