Add up the facts that Power Corp. appears to be connected to an oil company that would benefit extensively if Saddam remained in power, with the bank appointed by the UN to help broker an Oil-for-Food program that appears to have been directly enriching Saddam, and which is being investigated for irregularities that may have abetted the wholesale corruption that eventually engulfed Oil-for-Food, and that Power’s owners have a professional and personal relationship with the man hired by the UN to investigate the corruption, and itÃ¢€™s no wonder that more and more questions are being asked about the firm.

As well as family relationships – Paul Desmarais’ son is married to the daughter of former Canadian Prime Minister, Jean Chretien. In fact, every prime minister in the past 30 years (save one) has been associated with Power Corp in some capacity.

Prime Minister Paul Martin and former PMs Jean ChrÃƒ©tien, Brian Mulroney and Pierre Trudeau have all been close, personal friends of Paul Desmarais Sr. The story on Parliament Hill was that Trudeau’s leadership bid was cooked up in Power headquarters in Victoria Square in Montreal. In the hiatus of his political career in the 1980s, ChrÃƒ©tien cooled his heels sitting on the board of a Power Corp. subsidiary, Consolidated Bathurst, and Power executive John Rae ran ChrÃƒ©tienÃ¢€™s leadership campaigns in 1984 and 1990, as well as the 1993 election campaign that brought ChrÃƒ©tien to office. Martin got his start in the business world in the early sixties, working for then Power Corp. president Maurice Strong, and was made a millionaire, thanks to an undisclosed 1981 deal in which Desmarais sold him Canada Steamship Lines. Strong continues to act as one of MartinÃ¢€™s senior advisors.

This chart attempts to simplify the connections: 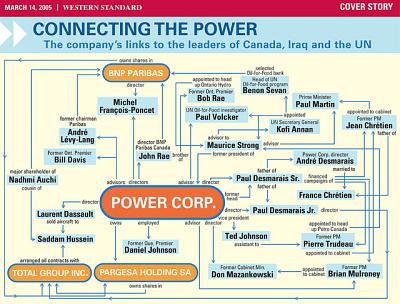 …[P]resident of Power from 1964 to 1966–who went on to run Ontario Hydro and Petro-Canada–is not only a member of the Privy Council for Canada and a direct adviser to Paul Martin, he’s also a senior adviser to UN Secretary General Kofi Annan.

Strong had been an undersecretary general of the United Nations since 1985. He once told Toronto journalist Elaine Dewar that he liked working for the UN specifically because of its undemocratic nature. “He could raise his own money from whomever he liked, appoint anyone he wanted, control the agenda,” wrote Dewar in her 1995 book, Cloak of Green. “He told me he had more unfettered power than a cabinet minister in Ottawa. He was right: no voters had put him in office, he didn’t have to run for re-election, yet he could profoundly affect many lives.”

Strong is the architect of the Kyoto Protocol – from which Power Corp’s holdings in China are certain to benefit.

Read it all. (Free registration)