The producer behind a group of music legends has passed away at the age of 90. 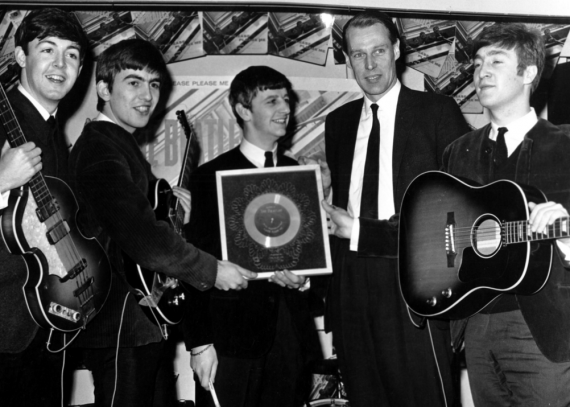 George Martin, the man who was so instrumental in the formation and career of one of the world’s greatest Rock & Roll bands that he came to be referred to a the ‘fifth Beatle,’ has died at the age of 90:

George Martin, the urbane English record producer who signed the Beatles to a recording contract on the small Parlophone label after every other British record company had turned them down, and who guided them in their transformation from a regional dance band into the most inventive, influential and studio-savvy rock group of the 1960s, died on Tuesday. He was 90.

“We can confirm that Sir George Martin passed away peacefully at home yesterday evening,” Adam Sharp, a founder of CA Management, a British company that represented Mr. Martin, said on Wednesday in an email. He gave no other details.

“God bless George Martin,” Ringo Starr, the former Beatle, wrote on Twitter. In a reminiscence on his website, Paul McCartney, the other surviving former Beatle, said Mr. Martin was “like a second father to me.”

Mr. Martin helped redefine a record producer’s role in pop music. He was one of a handful of pop producers — Phil Spector and Quincy Jones among them — to become almost as famous as the musicians they recorded. And when he left Parlophone, a subsidiary of EMI Records, to start his own production company in 1965, his reputation as the producer of the Beatles helped raise the stature of record production as an independent career, rather than as simply a record label function.

In the dozen years before he met the Beatles, Mr. Martin produced symphonic, chamber and choral recordings, jazz albums and a string of popular comedy records by Peter Ustinov, Peter Sellers and Spike Milligan. In the 1960s, as the recordings he made with the Beatles rode the top of the charts, he also produced hits by other British Invasion acts, among them Gerry and the Pacemakers, Cilla Black and Billy J. Kramer and the Dakotas. He later worked with a diverse roster of pop and jazz performers, including Ella Fitzgerald, the Bee Gees, Jeff Beck, the Mahavishnu Orchestra, Paul Winter, Cheap Trick, America and Ultravox.

His collaboration with the Beatles inevitably overshadowed his other accomplishments. From 1962 to 1970, Mr. Martin produced 13 albums and 22 singles for the group, a compact body of work that adds up to less than 10 hours of music but that revolutionized the popular music world. After the Beatles broke up, he virtually doubled that output, overseeing archival releases drawn from the group’s concerts at the Hollywood Bowl, BBC radio performances and unreleased studio recordings that reveal a great deal about the Beatles’ working process.

Musicians, celebrities and political leaders paid tribute to Mr. Martin on social media on Wednesday, including the producers Mark Ronson and Quincy Jones, who described him on a Facebook post as “my musical brother” who “knew the secrets of our craft that so few know today.”

A modest man who had been trained as a classical pianist and oboist, Mr. Martin always deflected credit for the Beatles’ success, telling interviewers over the years that his own efforts were secondary to the songwriting genius of John Lennon, Paul McCartney and, to a lesser extent, George Harrison. The Beatles, for their part, recognized that Mr. Martin came to the job with a virtually infallible ear for arrangements. His advice and his behind-the-scenes scoring and editing gave some of the Beatles’ greatest recordings their characteristic sound.

When the Beatles played “Please Please Me” for him for the first time, for example, it was in a slow arrangement meant to evoke the style of Roy Orbison, one of their heroes. Mr. Martin told them the song sounded dreary, and insisted that they pick up the tempo and add a simple harmonica introduction. His suggestions transformed “Please Please Me,” which became their first big hit.

Always intent on expanding the Beatles’ horizons, Mr. Martin began chipping away at the group’s resistance to using orchestral musicians on its recordings in early 1965. While recording the “Help!” album that year, he brought in flutists for the simple adornment that enlivens Lennon’s “You’ve Got to Hide Your Love Away,” and he convinced Mr. McCartney, against his initial resistance, that “Yesterday” should be accompanied by a string quartet.

A year later, during the recording of the album “Revolver,” Mr. Martin no longer had to cajole: The Beatles prevailed on him to augment their recordings with arrangements for strings (on “Eleanor Rigby”), brass (on “Got to Get You Into My Life”), marching band (on “Yellow Submarine”) and solo French horn (on “For No One”), as well as a tabla player for Harrison’s Indian-influenced song “Love You To.”

It was also at least partly through Mr. Martin’s encouragement that the Beatles became increasingly interested in electronic sound. Noting their inquisitiveness about both the technical and musical sides of recording, Mr. Martin ignored the traditional barrier between performers and technicians and invited the group into the control room, where he showed them how the recording equipment at EMI’s Abbey Road studios worked. He also introduced them to unorthodox recording techniques, including toying with tape speeds and playing tapes backward.

Mr. Martin had used some of these techniques in his comedy and novelty recordings, long before he began working with the Beatles.

“When I joined EMI,” he told The New York Times in 2003, “the criterion by which recordings were judged was their faithfulness to the original. If you made a recording that was so good that you couldn’t tell the difference between the recording and the actual performance, that was the acme. And I questioned that. I thought, O.K., we’re all taking photographs of an existing event. But we don’t have to make a photograph; we can paint. And that prompted me to experiment.”

Soon the Beatles themselves became intent on searching for new sounds, and Mr. Martin created another that the group adopted in 1966 (followed by many others). During the sessions for “Rain,” Mr. Martin took part of Lennon’s lead vocal and overlaid it, running backward, over the song’s coda.

George Henry Martin was born in London on Jan. 3, 1926, to Henry and Bertha Martin. As a child, he was a talented and largely self-taught pianist who had perfect pitch and was able to learn classical pieces and popular tunes by ear. While a student at Bromley Grammar School he formed a dance band, George Martin and the Four Tune Tellers. He continued a part-time career as a pianist during World War II, when he was a pilot in the Fleet Air Arm of the British Navy. When one of his performances attracted the attention of a BBC producer, he was invited to play one of his compositions, a piano prelude, on the “Navy Mixture” radio program.

After the war Mr. Martin attended the Guildhall School of Music, where he took up the oboe in addition to studying composition, conducting and piano. He worked briefly as a freelance oboist and as a clerk in the BBC’s music library before he was invited to become an assistant to Oscar Preuss, the recording manager at Parlophone Records. When he succeeded Mr. Preuss in 1955, at 29, he was the youngest label manager at EMI.

Parlophone was a poor relation among EMI’s labels — HMV and Columbia were more prestigious — but it had a varied roster when Mr. Martin joined its staff in 1950. He was first assigned to the company’s classical projects, including recordings by the London Baroque Ensemble and the conductors Malcolm Sargent and Charles Mackerras. But he soon moved on to orchestral pops, with Sidney Torch and the Queen’s Hall Light Orchestra; jazz, with John Dankworth and Humphrey Lyttelton; popular vocal music, with Matt Monro; and comedy, with Mr. Ustinov, Mr. Sellers and the “Beyond the Fringe” troupe of Jonathan Miller, Peter Cook, Dudley Moore and Alan Bennett.

Mr. Martin remained uninterested, assigning the group’s first session, on June 6, 1962, to Ron Richards, his assistant. But Mr. Richards found the Beatles interesting enough to send for Mr. Martin, who took over the session and was quickly won over by their charm and originality.

Still, he had doubts. He told the Beatles that their drummer at the time, Pete Best, was not good enough to record. They had their own doubts about Mr. Best, and quickly replaced him with Mr. Starr. Mr. Martin also had qualms about the first Lennon-McCartney songs he heard — “Love Me Do,” “P.S. I Love You” and “Hello Little Girl” — regarding them as derivative. He helped them find the spark that soon became their hallmark by insisting that they think carefully about their vocal harmonies and such niceties of the arranger’s art as introductions and endings. They quickly internalized his advice.

By the end of 1963 Mr. Martin was virtually coining money for EMI, not only with the Beatles’ recordings but also with the hits he was producing for Gerry and the Pacemakers, Cilla Black and others.

Mr. Martin did not at first share in the wealth these successes generated. When Mr. Epstein offered him a share of the Beatles’ publishing, he turned it down on the grounds that it would be a conflict of interest. He had, however, been arguing since early 1962 that EMI should pay him a royalty on his productions, instead of a salary. In August 1965, when EMI refused to offer Mr. Martin more than a token bonus, he left the company and formed his own production company, Associated Independent Recording (AIR), along with two other producers from EMI and the competing Decca label. The Beatles insisted that EMI continue to engage Mr. Martin as their producer after AIR was established, as did most of Mr. Martin’s other artists.

In 1966, not long after he established AIR, Mr. Martin married Judy Lockhart-Smith, who had been his secretary at Parlophone. They had two children, Lucie and Giles. He also had two children, Alexis and Gregory, from an earlier marriage, to Sheena Chisolm, which ended in divorce. Survivors include his wife and children.

AIR opened its own studio in London in 1970, and a Caribbean branch, on the Caribbean island Montserrat, in 1979. When the Montserrat studio was destroyed in a hurricane in 1989, Mr. Martin decided not to rebuild. But he compiled an album of recordings made at the studio by Mr. McCartney, the Rolling Stones, Dire Straits, the Police, Elton John and others as a charity for the 12,000 people who lost their homes in the storm.

In 1993 Mr. Martin opened AIR Lyndhurst, a state-of-the-art studio in a converted Victorian church in London, which has become an important studio for orchestral film soundtrack recording. Mr. Martin remained involved in its operation long after he stopped producing recordings in the late 1990s.

The two surviving members of The Beatles remembered Martin on Twitter:

Thank you for all your love and kindness George peace and love xx🖀✌️🊀🐀 pic.twitter.com/um2hRFB7qF

But perhaps the best way to remember Martin can be found in the music, the sound, and the legacy her played such a large role in helping to create:

And here’s Martin talks about the making of the song: