The sale and possession of alcoholic beverages inside the Coliseum will no longer be allowed at USC home football games, USC President Steven Sample said Wednesday, citing increasing surliness, foul language and other behavior by fans that he said was harming the game-day atmosphere.

“We’re going to get tough,” Sample said in an interview.

USC, which set attendance records the last two seasons, was the only Pacific 10 Conference school Ã¢€” and one of only a few nationally Ã¢€” that allowed the sale of alcoholic beverages inside the stadium at home games. Several Pac-10 schools allow alcohol to be sold in buildings near their stadiums.

Beer is sold inside the Rose Bowl at the Rose Bowl game, but not at UCLA games, according to Darryl Dunn, general manager of the stadium.

Sample outlined the reasons for his decision in a letter that was sent to about 10,000 USC supporters. In the letter, Sample said that to make the Coliseum “more family-friendly” the school and the Coliseum Commission, which operates the historic venue, “have agreed to end the sale of alcohol inside the Coliseum.”

I’m unsure just how much “more family-friendly” the atmosphere will be, when the rowdy crowd can simply increase their alcohol consumption at the tailgates and other pre-game festivities. But I suppose it’s an understandable step, especially since other schools have similar rules. The following statement, on the other hand, is utterly incomprehensible:

Sample said he recalled his experience at a Los Angeles Raider game when the NFL team played at the Coliseum.

“It was almost impossible to avoid a fistfight,” he said. “No matter how docile you were, you couldn’t bring your daughter, your wife, your mother-in-law. I don’t want that for USC.”

If Sample thinks that a beer ban would have caused Raider fans to act any differently, then he’s sorely out of touch. These barbarians are a violent species of their own. Just consider their spiked shoulder pads, pitch-black capes, and Darth Vader helmets. 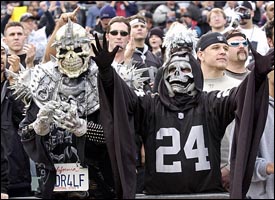 I’d venture to guess that they’re naturally predisposed to felonious behavior. Nothing could have stopped those fistfights. They would have happened with or without the cold ones. The entire country could return to Prohibition, and I guarantee that Raider fans will continue to raise the bar for incivility.