British hostage Ken Bigley was beheaded near Baghdad on Thursday afternoon, insurgent sources in the rebel-held town of Falluja said on Friday. Abu Dhabi Television, quoting “informed” sources in Iraq, had said earlier that the militant group led by al Qaeda ally Abu Musab al-Zarqawi had killed Bigley. Britain’s Foreign Office said it was aware of the reports. “We cannot corroborate the reports … We are in close touch with Mr. Bigley’s family at this difficult time,” a Foreign Office spokesman told Reuters in London. The insurgent sources said Bigley was killed in the town of Latifiya, about 35 km (22 miles) southwest of the Iraqi capital. They declined to say how they had got their information. Britain’s Sky TV, quoting British government sources, also said Bigley had been killed.

The 62-year-old engineer was kidnapped in Baghdad on Sept. 16 by the Tawhid and Jihad Group which has beheaded two American hostages who were seized along with the Briton. Militants have launched a spate of kidnappings as part of attempts to undermine the U.S.-led coalition ahead of January elections.

“We have learned from informed sources in the Iraqi capital that the kidnappers of Kenneth Bigley have killed him,” an Abu Dhabi newscaster said.

British hostage Kenneth Bigley has been killed by his captors in Iraq, Abu Dhabi television reported on Friday. The British Foreign Office said it could not confirm the report. An editor at Abu Dhabi TV in the United Arab Emirates said the report was based on ‘informed sources’ in Baghdad. He refused to say whether the station had received a video tape of the killing. The broadcast did not say when Mr Bigley was supposed to have been killed. There have been false claims about hostages in Iraq being killed in the past, notably those involving two Italian women who were released last week. In London, a British Foreign Office spokesman said he had no information that would confirm the report. ‘We’re aware of the reports but can give no further information,’ a spokesman for Prime Minister Tony Blair’s office in Downing Street said.

Mr Bigley, 62, was abducted on Sept 16 with two Americans from their residence in an upscale Baghdad neighbourhood by the militant Tawhid and Jihad group, led by Jordanian militant Abu Musab Al-Zarqawi. The Americans, Eugene Armstrong and Jack Hensley, were decapitated. Graphic videos of their slayings were posted on the Internet, along with videotapes of Mr Bigley pleading with Prime Minister Tony Blair to save him.

U.K. government officials said they were seeking to corroborate reports by Abu Dhabi television that British hostage Kenneth Bigley has been killed. “We’re urgently trying to corroborate reports that Kenneth Bigley has been killed but have not done so yet,” said a Foreign Office spokesman who asked not to be identified. “We’re in close contact with his family at this difficult time.’ 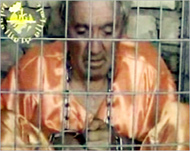 British hostage Ken Bigley was beheaded near Baghdad on Thursday afternoon, Reuters quoting sources in Falluja has said. The sources said on Friday that Bigley had been killed in the town of Latifiya, southwest of the Iraqi capital.

Bigley was seized in Baghdad 22 days ago.

Let’s hope this is just a cruel hoax. One suspects it’s not, however.

A video released by Muslim militants on Friday showed them beheading British hostage Kenneth Bigley, a Reuters witness said. Bigley was shown making a statement as six militants stood behind him, before one cut his head off with a knife. Guerrilla sources in the rebel-held city of Falluja said earlier that he was killed on Thursday afternoon in Latifiya, a Sunni Muslim town southwest of Baghdad. The tape showed Bigley wearing an orange jump suit of the type worn by detainees in U.S. prisons including the detention center at Guantanamo Bay in Cuba.

Prime Minister Tony Blair has expressed his “utter revulsion” over the beheading of Kenneth Bigley in Iraq and said those who resorted to hostage-taking around the world must not be allowed to win. “I feel utter revulsion at the people who did this, not just at the barbaric nature of the killing but the way frankly they played with the situation over the past few weeks,” Blair told reporters on Friday. “I feel a strong sense, as I hope others do, that the actions of these people whether in Iraq or elsewhere should not prevail over people like Ken Bigley.”

British Hostage Kenneth Bigley Handed Over to Another Group