Vincent Musetto, a New York Post editor who is likely to go down in history thanks to one headline in 1983, has passed away at the age of 74:

Vincent Musetto, a retired editor at The New York Post who wrote the most anatomically evocative headline in the history of American journalism — HEADLESS BODY IN TOPLESS BAR — died on Tuesday in the Bronx. He was 74.

A former colleague, Myron Rushetzky, confirmed the death, at Calvary Hospital, where Mr. Musetto had been in hospice care.

The writers of newspaper headlines generally toil in anonymity, and over time a few others have been posited as the creator of this one. But among the salty, ink-stained, intemperate cadre of New York journalists who wistfully recall the days when men wore hats and newspapers were made only of paper, Mr. Musetto was widely credited as the creator of this title, blazoned across The Post’s front page on April 15, 1983.

The crime behind the headline was lurid even by tabloid standards. On April 13, 1983, Charles Dingle, drinking in a tavern in the Jamaica section of Queens, argued with the owner, Herbert Cummings, and shot him to death. He then took several women hostage, raping one and forcing another, in an apparent bid to confound the police, to cut off Mr. Cummings’s head.

Apprehended the next day, Mr. Dingle was convicted and sentenced to 25 years to life. Denied parole several times, he died in the Wende Correctional Facility near Buffalo, N.Y., in 2012.

But what endured in public memory far longer than the crime was the headline, with its verbless audacity, arresting parallel adjectives and forceful trochaic slams. (The corresponding headline in The New York Times that day proclaimed, genteelly, “Owner of a Bar Shot to Death; Suspect Is Held.” Headlessness was not mentioned until the third paragraph; toplessness not at all.)

Mr. Musetto’s headline, exquisitely emblematic of The Post under Rupert Murdoch — its owner then as now — quickly insinuated itself into popular culture. It appeared on T-shirts; as the title of a 1995 movie starring Raymond J. Barry and loosely based on the crime; and as the name of a 2007 book, “Headless Body in Topless Bar: The Best Headlines From America’s Favorite Newspaper.”

But however lauded it became, it was not Mr. Musetto’s favorite among the many headlines he wrote for the paper.

That honor, he often said, went to one composed the next year : “GRANNY EXECUTED IN HER PINK PAJAMAS.”

Vincent Albert Musetto Jr., known as Vinnie, was born in May 1941 and grew up in Boonton, N.J. He earned a bachelor’s degree from Fairleigh Dickinson University in New Jersey.

“The average guy probably thinks that whoever writes headlines for The Post probably never got past third grade,” Mr. Musetto, who was partial to ballet and the films of Rainer Werner Fassbinder, told The Miami Herald in 1986. “I guess maybe they’d be shocked.”

Mr. Musetto, who early in his career worked for The Advance of Dover, N.J, joined The Post as a copy editor in the early 1970s. He served for four decades in various capacities, including as entertainment editor. After retiring in 2011, he contributed freelance movie reviews to the paper.

Mr. Musetto’s survivors include his wife, Claire, and a daughter, Carly.

As several former colleagues have recalled over the years, Mr. Musetto’s headline almost did not come to be. That April evening, as deadline loomed in the newsroom, it occurred to someone that the bar in question might not actually be topless.

“It’s gotta be a topless bar!” Mr. Musetto cried, as his former colleague Charlie Carillo wrote for The Huffington Post in 2012. “This is the greatest headline of my career!” (As quoted by Mr. Carillo, there was an intervening, ungenteel participle between “greatest” and “headline.”)

Condolences to Mr. Musetto’s family and friends, he will be remembered for a long, long time I think. 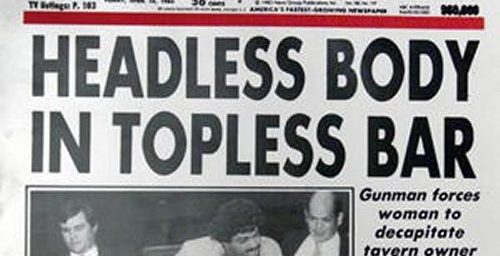 Author Of The Best Headline Ever Retires