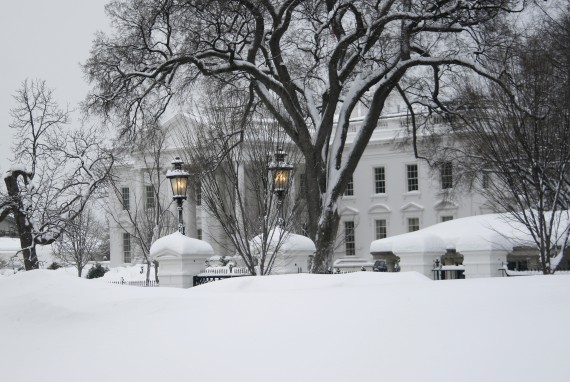 The Weather Channel announced today that it is going to start assigning names to major winter storms much in the manner that hurricanes are named:

Several decades after hurricanes first got formal names, some blizzards in the USA this winter will get their own names, too.

The Weather Channel will assign the monikers, “the first time a national organization in North America will proactively name winter storms,” the network reports.

Most of the names on the list have a Greek/Roman theme — the first three are Athena, Brutus and Caesar.

“On a national scale, the most intense winter storms acquire a name through some aspect of pop culture and now social media; for example, Snowmaggeddon and Snotober,” says Weather Channel winter weather expert Tom Niziol, referring to big snowstorms that blasted parts of the Eastern USA.

Snowstorms blowing in from Lake Erie are legendary in Buffalo. Over the years, they’ve been named locally after snakes (Anaconda, Boa, Copperhead) and insects (Aphid, Bedbug, Caterpillar), the weather service reports.

To avoid confusion, none of the Weather Channel’s 26 winter storm names (one for each letter of the alphabet) has been on any of the lists of names produced by the hurricane center.

The Weather Channel says naming will occur no more than three days before a winter storm’s expected impact, so forecasters are confident it could have a significant effect on large populations.

Unlike with tropical storms, which have specific naming guidelines based on wind speed, the criteria for winter storms will be flexible, Niziol says. The most important weather factors will be expected snowfall and/or ice accumulations and wind speed.

Population will play a big role, too, he says. A storm that dumps a foot of snow over the Cascades in Washington state might not get a name, while a storm set to hit Atlanta at rush hour with 1-2 inches of snow might.

None of this is official, of course. Hurricane names are assigned by the National Hurricane Center, part of the National Oceanographic and Atmospheric Administration, is in charge of assigning names to hurricanes based on specific standards. Additionally, one of the reasons that the custom of giving tropical storms names was to allow for easier communication between ship and shore regarding storm hazards on the seas. Naming blizzards serves no similar purpose. There’s an obvious publicity play going on here, but The Washington Post’s Jason Samenow says there might actually be some value in this:

To determine whether a storm gets named, TWC says it will evaluate whether it has the potential “to produce disruptive impacts including snowfall, ice, wind and temperature”. It will further consider whether the disruptive impacts will affect a populated region and occur at a particularly busy time of day or week.

From my perspective, these criteria make sense. And TWC has every right to name storms and certainly carries the expertise to determine what storms should be named.

Further, I agree with its primary rationale for doing this. TWC meteorologist Bryan Norcross said it well: “The fact is, a storm with a name is easier to follow, which will mean fewer surprises and more preparation.”

Not to mention, storms names are fun. We’ve solicited and developed them here at the Capital Weather Gang.

So, I guess we should be prepared for headlines like “Cicero Slams Cincinnati.”

Hurricane Center May Run Out of Names