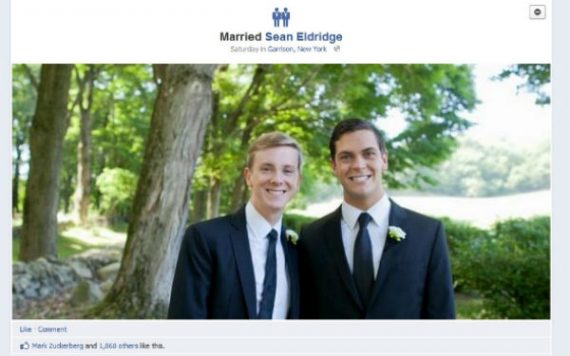 Facebook has introduced a new Timeline feature that allows same-sex couples to declare their marriage status on the site with icons that best reflect the relationship, rather than the standard icon of a bride and a groom used for straight couples.

The feature was first noticed over the weekend when Facebook co-founder Chris Hughes married his partner Sean Eldridge. An icon of two grooms was added to Hughes’ Facebook Timeline to announce their wedding news.

Facebook CEO and co-founder Mark Zuckerberg was among one of the 1,800 members that Liked Hughes’ update.

This isn’t the first time Facebook has showed support of same-sex couples. In February 2011 it introduced two relationship options for those in the lesian, gay, bisexual and transgender (LGBT) community, including “In a domestic partnership” and “In a civil union.”

In addition, Facebook has partnered with GLAAD (Gay and Lesbian Alliance Against Defamation) to prevent anti-gay bullying from occurring on the site. It also launched a Network of Support panel with MTV’s A Thin Line campaign to address LGBT issues and launches a Stop Bullying: Speak Up campaign with Time Warner.

“Following Facebook’s addition of domestic partnership and civil union to profile options last year, these new marriage icons for timeline are another important way for same-sex couples to be recognized,” Allison Palmer, GLAAD’s head of campaigns and programming, told Mashable.

Honestly, I suppose I’m actually surprised that this wasn’t already an option given Facebook’s user base and their previous efforts to reach out to the gay community.