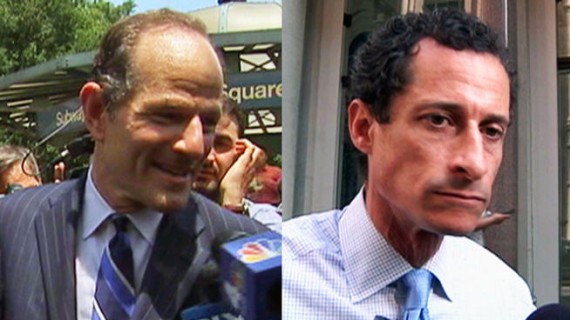 Both former Congressman Anthony Weiner and former Governor Elliot Spitzer are doing very well in the latest Quinnipiac poll for the respective offices they are running for in September’s Democratic primaries in New York City:

“Whether those numbers hold up in the real poll on Primary Election Day is the big question.”

Weiner gets 29 percent of men and 21 percent of women. The gender breakdown for other candidates generally matches their overall tally.

There is a big racial split and a smaller gender gap in the Democratic primary for comptroller: Spitzer leads 61 – 26 percent among black voters and 47 – 27 percent among Hispanic voters while Stringer leads 44 – 36 percent among white voters.

Spitzer gets a 53 – 32 percent favorability rating, with similar racial and gender divides.

For Stringer, 62 percent of Democrats haven’t heard enough about him to form an opinion.

In part, it appears as though, for New York voters, sexual improprieties in a politician just aren’t all that important:

As unlikely as it may have seemed at first, the idea of Mayor Anthony Weiner and Comptroller Elliot Spitzer is now no longer nearly as ridiculous as it all seemed to be when this all began.