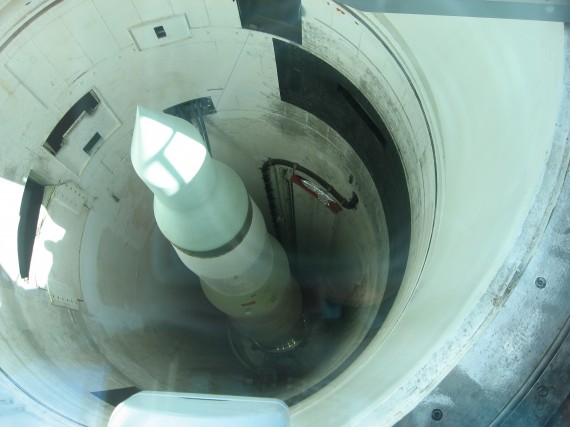 Karl Smallwood tells the story of a day when every Minuteman missile silo in America had a nuclear launch code that would make any security expert cringe:

Today I found out that during the height of the Cold War, the US military put such an emphasis on a rapid response to an attack on American soil, that to minimize any foreseeable delay in launching a nuclear missile, for nearly two decades they intentionally set the launch codes at every silo in the US to 8 zeroes.

We guess the first thing we need to address is how this even came to be in the first place. Well, in 1962 JFK signed the National Security Action Memorandum 160, which was supposed to ensure that every nuclear weapon the US had be fitted with a Permissive Action Link (PAL), basically a small device that ensured that the missile could only be launched with the right code and with the right authority.

Those in the U.S. that had been fitted with the devices, such as ones in the Minuteman Silos, were installed under the close scrutiny of Robert McNamara, JFK’s Secretary of Defence. However, The Strategic Air Command greatly resented McNamara’s presence and almost as soon as he left, the code to launch the missile’s, all 50 of them, was set to 00000000.

Oh, and in case you actually did forget the code, it was handily written down on a checklist handed out to the soldiers. As Dr. Bruce G. Blair, who was once a Minuteman launch officer, stated:

Our launch checklist in fact instructed us, the firing crew, to double-check the locking panel in our underground launch bunker to ensure that no digits other than zero had been inadvertently dialed into the panel.

This ensured that there was no need to wait for Presidential confirmation that would have just wasted valuable Russian nuking time.  To be fair, there was also the possibility that command centers or communication lines could be wiped out, so having a bunch of nuclear missiles sitting around un-launchable because nobody had the code was seen as a greater risk by the military brass than a few soldiers simply deciding to launch the missiles without proper authorization.

So to recap, for around 20 years, the Strategic Air Command went out of there way to make launching a nuclear missile as easy, and quick, as possible.  To be fair, they had their reasons, such as the fact that the soldiers in the silos in the case of a real nuclear war may have needed to be able to launch the missiles without being able to contact anyone on the outside.  That said, their actions were in direct violation of the orders of the Commander-in-Chief, the President of the United States, during a time of extreme nuclear tension. Further, not activating this safeguard and lax security ensured that with very little planning, someone with three friends who had a mind to, could have started World War III.

Well, take that for what it’s worth.