The Obama administration has issued a strongly worded statement on this morning's massacre by the Egyptian government. 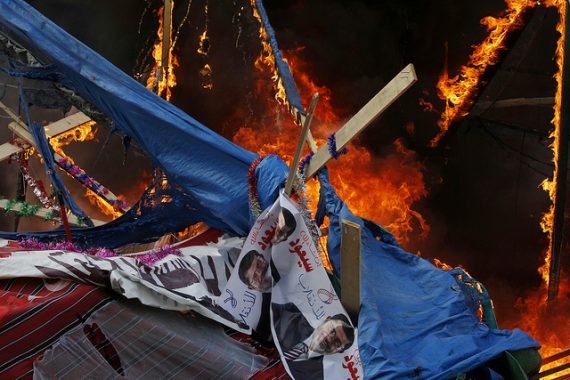 The Obama administration has issued a strongly worded statement on this morning’s massacre by the Egyptian government:

The United States strongly condemns the use of violence against protesters in Egypt. We extend our condolences to the families of those who have been killed, and to the injured. We have repeatedly called on the Egyptian military and security forces to show restraint, and for the government to respect the universal rights of its citizens, just as we have urged protesters to demonstrate peacefully. Violence will only make it more difficult to move Egypt forward on a path to lasting stability and democracy, and runs directly counter to the pledges by the interim government to pursue reconciliation. We also strongly oppose a return to a State of Emergency law, and call on the government to respect basic human rights such as freedom of peaceful assembly, and due process under the law. The world is watching what is happening in Cairo. We urge the government of Egypt – and all parties in Egypt – to refrain from violence and resolve their differences peacefully.

By diplomatic standards, that’s pretty plain spoken. But “strongly condemn,” “strongly oppose,” “call on,” and “urge” are, at the end of the day, just talk. The question remains whether any action will follow if the words fall on deaf ears.

To be clear: It is not in the US national interest to intervene militarily and there’s essentially zero chance that we will. But it’s time to hold the Egyptian military accountable for their crimes which, at a minimum, means we have to immediately suspend aid payments.

With blood in Egypt’s streets and a return to a state of emergency, it’s time for Washington to stop pretending. Its efforts to maintain its lines of communication with the Egyptian military, quietly mediate the crisis, and help lay the groundwork for some new, democratic political process have utterly failed. Egypt’s new military regime, and a sizable and vocal portion of the Egyptian population, have made it very clear that they just want the United States to leave it alone. For once, Washington should give them their wish. As long as Egypt remains on its current path, the Obama administration should suspend all aid, keep the embassy in Cairo closed, and refrain from treating the military regime as a legitimate government.

That’s a harsh assessmentquite likely correct. Given backing from wealthy Arab states, Egypt’s military can continue its reign with or without US aid. It’s quite unlikely that Washington will have more than marginal impact on how this crisis unfolds.