Why Clintons Beat The Press

What reporters see as stonewalling may be shrewd clock management. 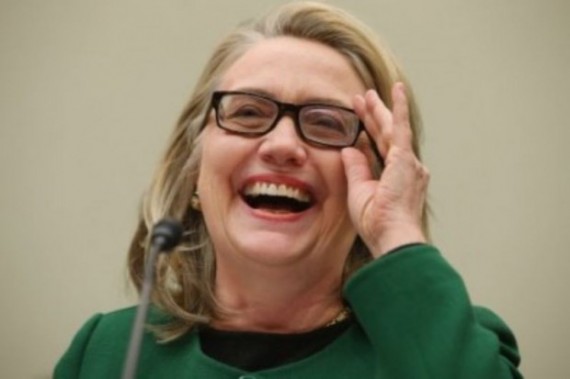 Jack Shafer has a shrewd take on why “Team Clinton Will Beat the Press—Again.”

[W]hile reporters operate in insect time, buzzing over facts and queries that may have a life of hours, days, or weeks before expiring in a natural death, the Clintons operate in geological time. She and her campaign staff have a 20-month-long runway in front of them, and like a glacier they will patiently grind their opponents into gravel by applying time and pressure. In the Clinton team’s Machiavellian view, directly responding to the press corps’ questions on the press corps’ timetable will only give greater longevity to the story. The longer Hillary Clinton sits tight and allows the email collection and vetting “process” to work in the background, issuing assurances that she’s now in complete compliance, the better off she will be. The press insects will lose interest and move on to other, more juicy sources of meat. A reporter can’t write something about nothing very many times before editors and readers rebel.

Clinton’s political foes and the press tend to view her glacial strategy as stonewalling—without acknowledging that good stonewalls make good politics and sometimes even better press coverage. Everybody knows the press has a short attention-span. Even when binging on Adderall, reporters will allow today’s news stories to rot to dust if they think they can squeeze more nutrition out of tomorrow’s news. As an inordinately lucky politician, Clinton knows from her husband’s experience that some foreign disaster or domestic crisis can be relied upon to ride to her rescue and dislodge the email story from the dailies’ front pages. The only time you need to “get ahead of bad news” is when you can’t avoid doing so.

However naughty Hillary Clinton’s email habits—and I’m as scandalized as most about violations of the Federal Records Act—nobody expects a special prosecutor to assist the Republicans’ rescue with a never-ending investigation. They’ll have to do their own work with their congressional committees. Will it amount to much? Unless a smoking gun is found in the Clinton emails, probably not. Six weeks hence, when asked about the emails, Clinton and her staff will flick their hands and say, as they often do, “Oh, that’s old news.”

That’s exactly right. The Clintons have been remarkably good at riding out scandals, real and otherwise, and turning them into “old news.”

But Hillary Clinton lacks something that her husband does: likability. She’s at least as talented a policy wonk as Bill and is certainly much more disciplined. But he possesses a legendary ability to charm all but the most hardened opponents while she leaves even supporters cold. Because of that, she’s much less able than him at overcoming the nagging sense of shadiness.

After losing the nomination to Barack Obama in 2008, she enjoyed an amazing surge of popularity during her tenure as Secretary of State. She immersed herself in the job and was simultaneously a loyal servant of the president and the most visibly competent member of the administration. Her favorability ratings surged into the low 60s and stayed in the high 50s for some time. About two years ago, they began to plummet and her unfavorability ratings began to surge. She’s currently at 46.9% favorable and 46.1% unfavorable in the HuffPo average.

Now, it’s true that she’s not only the runaway favorite to win the Democratic nomination but has a solid lead over any potential Republican rival. But here’s the thing: she and Joe Biden are the only truly known quantities in the race. A Gallup survey taken last July showed a full 91% having an opinion about her. The next closest was Biden, who registered 80%.  Most of the Republicans were polling in the 30s and 40s. Only Jeb Bush and Chris Christie, both coming in at 65%, had very high recognition–and that’s just a “familiarity” rating. Clinton has been in the national spotlight continuously since the 1992 primaries—a full 23 years. None of the others comes anywhere close.