Why Don’t Politicians Write Their Own Speeches?

I was scouring the op-ed pages of the papers today and came across a David McGrath piece in the Washington Post introduced with the blurb “When was the last time you saw or heard a writer credited at the end of a speech by John McCain or Barack Obama?”

I clicked through, expecting a piece expressing bemusement over CNN’s commentators last night continuing to point out the Matthew Scully wrote Sarah Palin’s VP acceptance speech when nobody bothered to point out that Obama, Joe Biden, and others didn’t exactly write their own speeches, either.

Instead, McGrath had a much more substantive point:  Why is it that we accept ghost written speeches at all?

He notes that we universally decry term paper mills and that public figures are routinely excoriated for passing off others’ words as their own in just about every other circumstance.  And the arguments excusing ghost writers — they’re paid, they consent to let others use their words, everyone knows it happens — apply in cases we deplore.

Can voters this year be sure they learned something about the real Sarah Palin from her GOP vice presidential nomination acceptance speech last night, considering news that it was originally written by speechwriter Matthew Scully over a week ago for an unknown male nominee? The commissioned draft was subsequently customized by Palin and a team of McCain staffers in the 48 hours leading up to its presentation.

Psychologists, composition teachers, college admissions officers and personnel directors all know that when it comes to extracting truth and character, there is no more reliable indicator than a person’s original, written words. Why, then, as we watch two finalists compete for the most important job in the world, do we tolerate their lip-syncing of someone else’s creation?

If contemporary political candidates cannot find time to write all their speeches, the way Teddy Roosevelt or Abraham Lincoln did, they should at least craft the major ones. And when they must use speechwriters, they should credit the writer at the conclusion so the public knows the true source of the work.

Now, it’s not clear that being a gifted writer of prose necessarily translates into executive leadership.  And, one could argue that, since we’d never be certain that candidates didn’t get surreptitious help with their speeches, we might as well do away with the pretense.

And, I’d argue, professional speechwriters are more akin to the behind-the-scenes writers who work for Jay Leno, David Letterman, Jon Stewart, and others than term paper mills.  The point of a political speech isn’t — as with a college paper — to demonstrate mastery of writing skills but rather to convey a candidate’s message effectively to a wide audience.

Still, McGrath has a point.  Even if people theoretically know that candidates don’t write their own lines, we all fall into the psychological trap of acting as if they do.  We credit them, not their handlers, for getting off good zingers in the debates or a particularly funny line in a speech.  That’s true, of course, for the standup comic as well.  But politicians are not, at least in theory, mere showmen. 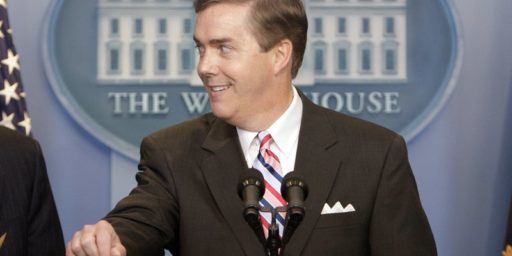