Republicans continue to harp on the fact that the President uses a TelePrompter. 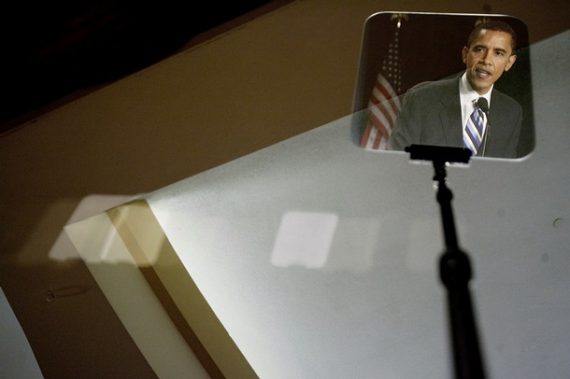 The odd Republican war against teleprompters that began early in the Obama Administration continues, with the latest variation on the theme being Rick Santorum’s suggestion that it should be illegal for Presidential candidates to use teleprompters:

Republican Rick Santorum has for quite a while taken issue with candidates on the trail who use a teleprompter. It’s a dig on President Barack Obama, and more recently has been used to attack Mitt Romney – a man who’s also been known to use a prompter or two.

But campaigning along the Gulf Coast in the Tuesday primary state of Mississippi, Santorum took it a step further, saying use of the digital word machine should be outlawed.

See, I always believed that when you run for president of the United States, it should be illegal to read off a teleprompter,” Santorum said at a Gulfport restaurant. “Because all you’re doing is reading someone else’s words to people.”

He continued to elaborate on why he believes prompters should have no place in politics, saying that people should know that a candidate’s words haven’t been “focus-grouped” and that the words are the candidate’s – not those of “pollsters and speechwriters.”

“You’re voting for someone who is going to be the leader of our government,” Santorum said. “It’s important for you to understand who that person is in their own words, see them, look them in the eye…hear what’s (in their)  heart.”

“You’re choosing a leader. A leader isn’t just about what’s written on a piece of paper.”

This is all patently silly. A leader isn’t just about what’s written on a piece of paper, this much is true, but a leader also is not about who makes the best off-the-cuff speeches, and that’s a pretty bad measure for picking a President. Santorum isn’t just denouncing teleprompters here, of course, he’s denouncing speechwriters, which have been a part of Presidential politics for at least the last 50 years, if not longer. Just as teleprompters have been used by every politician since they were invented, speechwriters have been used by Presidents. Every one of Ronald Reagan’s great speeches went through the hands of at least one speechwriter, and I don’t recall anyone complaining about the fact that someone else wrote these words:

In the end, does it really matter that Peggy Noonan penned those words? Of course it doesn’t. We didn’t hire Ronald Reagan to write speeches. We hired him to be President, and part of being President is to comfort the nation after a national tragedy. The fact that the words were written by someone else, and that he read them off a teleprompter means absolutely nothing. To borrow an example from a completely different field, Frank Sinatra sung songs written by other people and never learned to read a note of music, but people didn’t go to his concerts expecting that he did. Of course, Santorum’s comments really don’t have much to do with his actual opinions about the proper role of Presidents, or whether speechwriters to exist. It’s part of a meme about the President that started virtually from the day President Obama took office, and has continued throughout the Presidential campaign, and it strikes me as little more than an effort by Republicans to infer that the President is stupid because he uses teleprompters.

Chris Cillizza comments on the origins of the meme and what it means for the GOP:

Republican candidates rely on attacking President Obama’s use of a TelePrompter for one reason: It works. Gingrich’s Prompter line is regularly one of the biggest laugh-getters of his speech and Santorum’s “make TelePrompters illegal” line was almost certainly a planned hit not an off-the-cuff remark.

Why? Because, for Republican base voters, it epitomizes everything they dislike about President Obama. It reveals that “he’s all show,” explained Curt Anderson, a Republican media consultant who did work for Texas Gov. Rick Perry’s presidential bid but is now unaffiliated in the race. “All hat, no cattle.”

Added Rob Stutzman, a California-based Republican consultant: “Obama took the TelePrompter to a new level of absurdity when he reached the White House. It seemed he couldn’t even greet a little league team without the Prompter in place.”

In short: The use of a Prompter gets at authenticity, which should be the watch word for all politicians in the coming election. These days voters tend to believe that all politicians are telling them what they want to hear. For Republicans, Obama’s use of the TelePrompter is the height of inauthenticity — reading words written for him by someone else from an electronic device.

And, while bashing Obama’s TelePrompter use may be a good formula for winning over the most conservative of voters during this protracted Republican primary fight, it’s a strategy that also has limits.

With the economy still struggling to regain the ground it lost over the past few years and gas prices soaring, talk of TelePrompters can seem trivial by comparison.

“This is one of the reasons we’re not in good shape,” said Republican party strategist John Weaver. “Where is the discussion about jobs?”

Stutzman described Santorum’s latest line of attack as an “eye roller”, adding:”It’s an odd line of attack. One could counter it makes more sense to ban sweater vests.”

The Republicans’ war on TelePrompters is an example of why many in the party are wary about the GOP nomination fight extending all the way through June. Attacking TelePrompters might be a winning strategy (or at least part of one) in a Republican primary race but’s it hard to imagine any swing voters this November being persuaded by that line of attack.

Much like other lines that the candidates have fallen back on during the course of this campaign, such as the largely discredited idea that the President has repeatedly “apologized for America,” the TelePrompter meme works with the Republican base because it confirms what they already think about the the President. So I suppose it makes sense that a candidate like Santorum, who has already called the President a snob  for wanted students to consider post-secondary educational opportunities, would repeat nonsense like this. The fact that it tends to make the candidate, and the party, look ridiculous to the voters that they will need to win over in November doesn’t seem to occur to them.

So the President uses a teleprompter? So, what? So did Reagan, are Republicans insinuating that he was stupid and inauthentic too?