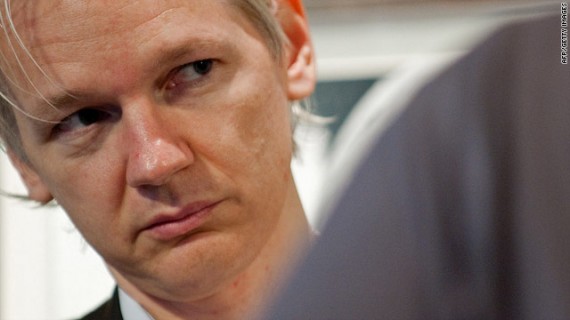 The full story isn’t out but here’s backstory from the Telegraph (“Wikileaks founder Julian Assange facing arrest over ‘rape’ claim “):

The warrant was issued by prosectors in Sweden, where the Australian-born internet activist was on a visit last week.

“Julian Assange is wanted for two different issues, one of them is that he’s suspected of rape in Sweden,” said Karin Rosander, director of communications at the prosecutor’s office.

Supporters of Mr Assange believe he has been the victim of a smear campaign to discredit him. The Wikileaks Twitter page dismissed the assault claims, which first appeared in Sweden’s Expressen newspaper, as “dirty tricks”.

It said: “Expressen is a tabloid; No one here has been contacted by Swedish police. Needless to say this will prove hugely distracting.”

The founder and editor of the whistle-blowing website WikiLeaks, Julian Assange, has been charged in Sweden with rape and molestation, a spokeswoman for the Swedish prosecutor’s office told CNN Saturday.

Spokeswoman Karin Rosander said the charges were filed Friday night, but she didn’t have further details.

Assange denied the charges in a posting Saturday on the WikiLeaks Twitter page, saying, “The charges are without basis and their issue at this moment is deeply disturbing.”

Assange was in Sweden last weekend, but Rosander said it’s not clear whether he is still in the country. She said police have been unable so far to make contact with Assange.

In all seriousness, while I view Assange as substantially lower than pond scum, this story is incredibly murky.  While I’m happy to see him discredited and silenced, bogus rape charges are beyond the pale.  One trusts that there’s substantive probable cause he for issuing the warrant.

And I fully agree with Steven:  Issuing it in the first place was highly premature given how quickly it was withdrawn.   While, unlike Steven, I have indeed formed an opinion about Assange, my opinions on government issuing bogus rape charges is far stronger.