Democrats like New York Senator Chuck Schumer could end up being the ones that scuttle the Iranian nuclear deal.

The political problems that President Obama may have selling the Iranian nuclear deal were emphasized quite well yesterday when New York Senator Chuck Schumer, who is set to succeed Harry Reid as leader of the Democratic Caucus in the Senate, endorsed legislation that would essentially require the President to submit whatever deal is finally reached by the June 30th deadline in the framework for approval by Congress:

Democratic Sen. Chuck Schumer, one of Capitol Hill’s most influential voices in the Iran nuclear debate, is strongly endorsing passage of a law opposed by President Barack Obama that would give Congress an avenue to reject the White House-brokered framework unveiled last week.

The comments Monday by the Democratic leader-in-waiting illustrate the enormity of the task ahead for Obama and his team: While there’s no guarantee that Congress would ultimately reject an agreement with Iran, there’s an increasingly bipartisan consensus that Congress should at least have the ability to do so.

Democratic Sen. Chuck Schumer, one of Capitol Hill’s most influential voices in the Iran nuclear debate, is strongly endorsing passage of a law opposed by President Barack Obama that would give Congress an avenue to reject the White House-brokered framework unveiled last week.

The comments Monday by the Democratic leader-in-waiting illustrate the enormity of the task ahead for Obama and his team: While there’s no guarantee that Congress would ultimately reject an agreement with Iran, there’s an increasingly bipartisan consensus that Congress should at least have the ability to do so.

His comments came as the White House press secretary was panning the legislation, which was written by Senate Foreign Relations Committee Chairman Bob Corker (R-Tenn.) and would allow Congress to vote to suspend the lifting of sanctions. A committee vote on the measure is planned for next week.

Schumer is a potentially decisive figure in whether the Iran measure will eclipse veto-proof support in Congress, given his expected ascension to the Democratic leader’s job in 2017 and the diminished influence of indicted Sen. Robert Menendez of New Jersey, who recently relinquished his position as the top Democrat on the Foreign Relations panel.

Within the Senate Democratic Caucus, a dozen senators have either co-sponsored Corker’s legislation or indicated they could support it. That would put the measure one vote shy of a veto-proof majority. On Monday, three more Democratic senators — Kirsten Gillibrand of New York, Joe Manchin of West Virginia and Claire McCaskill of Missouri — left open the possibility of voting for it, according to aides. Their support, however, could hinge on whether Sen. Ben Cardin (D-Md.), the new ranking member of the Foreign Relations Committee, is able to negotiate concessions that alleviate concerns the bill could derail any agreement.

Capitol Hill aides in both parties on Monday said it is not clear what changes Democrats will seek. The bill would give Congress 60 days to review the Iran framework by freezing sanction relief and allowing lawmakers the ability to formally disapprove or approve of the legislation. One possibility is to clarify that the legislation governs only congressional sanctions rather than ones that originated from global agreements or the White House.

With no co-sponsors publicly backing away from Corker’s bill in recent days, Democratic supporters said they have detected a shift in rhetoric from the White House. They pointed to Obama’s comment to The New York Times over the weekend in which he suggested finding a legislative compromise “that allows Congress to express itself but does not encroach on traditional presidential prerogatives.”

“I read what the president said last night, looking for a way to work with Congress on that. They are now in a realistic position: That Congress is going to weigh in,” said Sen. Tim Kaine (D-Va.), who co-wrote the bill while making technical consultations with the White House. He called Obama’s tone in that interview “just a recognition of the reality of the situation” on Capitol Hill.

But White House press secretary Josh Earnest declined to entertain that possibility, telling reporters on Monday that the White House sees no way to reconcile Corker’s bill with the president’s mission of finishing Iran negotiations before Congress votes on anything.

“It could potentially interfere with the ongoing negotiations,” Earnest said, insisting that Congress wait until after the June 30 deadline for a final agreement before voting on the legislation.

Such a delay appears increasingly unlikely, however. Corker said he plans to hold a committee vote on April 14, and Senate Majority Leader Mitch McConnell (R-Ky.) vowed Monday that the full Senate will consider the bill shortly after that.

Over in the House, the bill also apparently has a high level of support among Democrats, including possibly enough to constitute a veto proof majority. If the bill survives in its current form, then, and President Obama does veto it, then that would set in motion an entirely different set of political calculations for many of these Democrats, including the possibility of whether or not they would be willing to hand their President such a significant legislative defeat on an important matter of international relations. Of course, the President could decide the sign the bill into law and allow the negotiations in Switzerland to continue with this legislation hanging over their head. Assuming a deal is reached at some point, then the bill would set in motion a complicated set of requirements that would have to be met for Congress to formally disapprove what has been agreed to, a vote that would also require Democrats who are presently voicing support for the bill to be willing to hand a defeat to the leader of their party on the international stage.

Party loyalty isn’t the only thing that is likely to guide these Democrats on Capitol Hill, of course. Although there hasn’t been any significant polling since the framework agreement was announced, polling has consistently showed that the American people are strongly opposed to Iran possessing nuclear weapons, and strongly in favor of maintaining sanctions and other non-military means in order to ensure this. Additionally, of course, one cannot discount the influence of Israel in this situation and the fact that Americans who support Israel are likely to be lobbying their representatives quite actively when this issue comes up for a vote. At its most basic level, many of these legislators will have to make a choice between loyalty to a Democratic President and the will of the voters. What they choose could have significant implications.

The open question, of course, is what impact legislation like this would have have on the negotiations themselves. Corker and other supporters of the bill say that it would enhance the bargaining power of the negotiators because they would be able to blame the inability to get Congressional approval on their rejection of certain Iranian demands or insistence on enhancing other terms of the already announced framework. Given the difficulty in reaching even the framework agreement that was announced last week, though, one has to wonder whether a position such as that would cause the Iranians to agree to further concessions or become more recalcitrant about agreeing to anything, especially since it’s already well-known that the hardliners in the Iranian government are just as skeptical about the idea of any agreement at all as many Americans are. It’s also unclear how trying to re-negotiate the terms of the framework agreement would impact the other parties to the negotiations, especially Germany, the United Kingdom, Russia, and China. If the United States ends up being alone on a ledge insisting on a harder line toward the Iranians, with possibly only the French backing us up, then the entire negotiating process could collapse and we’d be back at square one. 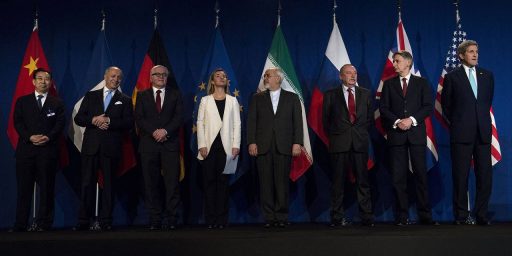 Reactions To Iran Nuclear Deal About What You’d Expect