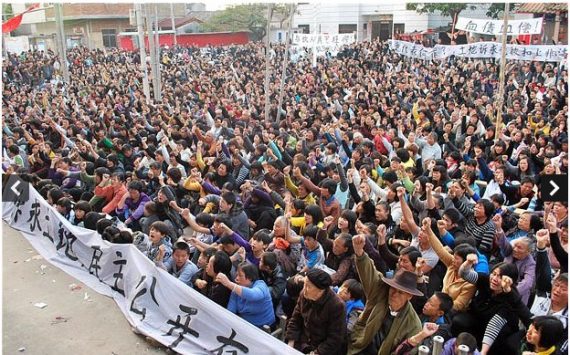 As Dave Schuler noted earlier this week, a fishing village in southern China has become the site of a rather remarkable revolt against central authority. The leadership in the village fled town shortly after the protests began, and the protests continue, but there’s a small army building up outside town and it seems like the next shoe will inevitably drop:

WUKAN, China — Each day begins with a morning rally in the banner-bedecked square, where village leaders address a packed crowd about their seizure of the village and plans for its future. Friday’s session was followed by a daylong mock funeral for a fallen comrade, whose body lies somewhere outside the village in government custody.

It has been nearly a week since the 13,000 residents of this seacoast village, a warren of cramped alleys and courtyard homes, became so angry that their deeply resented officials — and even the police — fled rather than face them. Now, there is a striking vacuum of authority, and the villagers are not entirely sure what to make of their fleeting freedom.

“We will defend our farmland to the death!” a handmade banner proclaims, referring to a possible land deal they fear will strip them of almost all their farmland. “Is it a crime,” another muses, “to ask for the return of our land and for democracy and transparency?”

How long they will last is another matter. As the days pass, the cordons of police officers surrounding the village grow larger. Armored trucks and troop carriers have been reported nearby. On local television, a 24-hour channel denounces the villagers as “a handful of people” dedicated to sabotaging public order, with the names of protesters flashing on a blue screen, warning that they will be prosecuted. Many here fear this will all end badly. “The SWAT teams and the police here are acting like they’re crime organizations, not police forces,” said Chen Dequan, a 50-year-old farmer and fisherman. “The entire village is worried.”

The dispute that emptied Wukan of its government officials is, on its face, like hundreds — if not thousands — of others that inspire protests here each year: villagers who believe their land was taken illegally take to the streets when their concerns are ignored.

But the suspicious death of a well-liked villager, who was selected to negotiate on the citizens’ behalf, appears to have turned this long-simmering grievance into a last-straw standoff with the authorities.

The land deal inspiring the protests involved one of China’s largest property developers, a Hong-Kong listed company called Country Garden that prides itself on fast-paced construction in mostly suburban areas. Yang Huiyuan, described by analysts as the company’s chairwoman, is often listed as one of the richest women in China.

The company has faced controversy before. Xinhua, China’s official news agency, said this year that it had bought Anhui Province land to build a golf course in a deal that smacked of “the typical collusion of real estate business and local government.” The agency’s signed commentary said more than 10 government officials had been punished after that transaction and other cases of illegal purchases and use of land there.

Here in Wukan, many residents believed that the national government had not yet intervened to resolve matters simply because it had been misled by nefarious local officials to believe that all was well.

So far, however, it seems from inside this locked-down village that government leaders at all levels are flummoxed at their blue-moon, if temporary, loss of control.

Lin Zuluan, 67, a retired businessman who is now the village’s de facto leader, said that officials had approached him to negotiate an end to the protest, but that talks had gone nowhere, in part because the officials would not meet villagers’ demands to return all their land.

“I do have concerns” over the lack of progress, he said. “But I do believe this country is ruled by law, so I do believe the central government will do whatever it has to do to help us.”

The revolt, then, isn’t so much against the Chinese government as it is against local officials who the villagers believed were involved in a corrupt land deal. Of course, this being China it seems unlikely that these local officials were acting entirely on their own, or that the central government is really all that interested in being helpful beyond quelling this rebellion before it spreads.

The Heritage Foundation’s Dean Cheng notes, in fact, that the concerns of the central government have more to do with stability than placating rebellious fishermen, and that these protests could have political implications in the near future.

For Beijing, the issue is likely to be coming to a head, for a number of reasons. In the first place, Wukan is now effectively no longer governed by the Chinese Communist Party—an enormous blow to the Party’s prestige and authority. This highlights the growing number of “mass incidents (qunti shijian)” underway in the People’s Republic of China (PRC). The growing number of such mass incidents, as one Chinese study observed, is threatening social stability. Wukan would seem to bear out this gloomy assessment.

Even more disturbing: This incident is likely to have ripple effects in China’s impending power transition next year. Such a massive protest in Guangdong province raises real questions about the future of its Party secretary, Wang Yang. Wang has been tagged as a possible member of the Chinese Communist Party’s Politburo Standing Committee (PSC), the nine people who actually run the PRC. Wang has been seen as a possible rival to Bo Xilai, Party Secretary of Chongqing, who is himself campaigning for a seat on the PSC (which is itself a break with tradition).

Ironically, among other roles in the multiple overlapping dimensions of Chinese factional politics, Wang is thought to be an economic reformer. If he is discredited to some extent at this crucial time in the political transition, it could leave the economic reform camp without a major voice at a time when the U.S. is likely to be pushing harder for reform. While it is the expanding state, and attendant opportunities for corruption and abuse of power, that is causing the problem in Wukan, reformers are often accused of under-emphasizing political and social stability when making their proposals. Wang and, by extension, his allies and supporters have now been made more vulnerable to that charge.

The Wukan protests are nearly three weeks old now, and the world is starting to notice. It won’t be long before other areas of China start learning of what’s going on there, if they haven’t learned already.