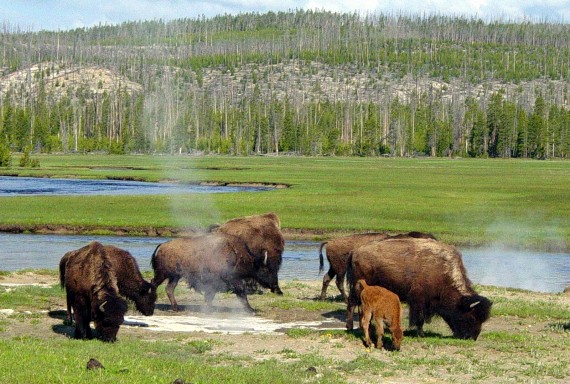 Vox’s Dylan Matthews writes about what appears to be a really big loophole in the law:

Let’s imagine Daniel and Henry are vacationing in Yellowstone National Park, and set up camp in the 50 square miles of the park that are in Idaho (unlike most of the park, which is in Wyoming). They get into a fight and Daniel winds up killing Henry. But rather than bury the body and try to cover up the crime, Daniel freely admits to it and surrenders himself to the authorities.

At his trial, he invokes his right, under the Sixth Amendment, to a jury composed of people from the state where the murder was committed (Idaho) and from the federal district where it was committed. But here’s the thing — the District of Wyoming has purview over all of Yellowstone, even the parts in Montana or Idaho. So Daniel has the right to a jury composed entirely of people living in both Idaho and the District of Wyoming — that is, people living in the Idaho part of Yellowstone. No one lives in the Idaho part of Yellowstone. A jury cannot be formed, and Daniel walks free.

That scenario is fiction, but all the legal maneuvers Daniel employs are completely legitimate, and someone in a similar situation could quite possibly get off scot free. That got a lot of attention when it was first pointed out by Michigan State law professor Brian Kalt in his 2005 Georgetown Law Journal article, “The Perfect Crime.” After all, it implied that there was a 50 square mile “Zone of Death” of the United States where you can commit crimes with impunity, like in The Purge or something. The scenario even got featured in a best-selling mystery novel, Free Fire by CJ Box, who consulted Kalt when writing the book.

So Kalt set about trying to get Congress to do just that. Nine years later, the Idaho loophole persists. And it wasn’t because Congress just didn’t hear about it; several members became aware of the loophole. Here’s the story of how Congress managed to leave a 50 square mile Zone of Death standing despite it being known for nearly a decade.

How exactly could this be the case? Well, Professor Kalt explained it this way in a 2005 interview with NPR:

Professor BRIAN KALT (Michigan State Law School): Yes. There’s a small portion of Yellowstone National Park that spills over the Wyoming border into Idaho and another small part that’s in Montana that would create an almost perfect crime.

SIEGEL: Now what is so special about, we’ll say, the non-Wyoming portions of Yellowstone Park?

Prof. KALT: Well, the problem is that the federal District Court for the District of Wyoming is defined as including all of Yellowstone Park, including that 50-square-mile swath of Idaho. And the Sixth Amendment requires that when a crime is committed, that the jury be drawn from the state and district where the crime was committed. And the trial is supposed to be in the state where the crime was committed. So if you commit a crime in the Idaho portion of Yellowstone National Park, the jury should be drawn from among the ranks of Idahoans but also from the District of Wyoming. And unfortunately the population of that area is zero.

SIEGEL: (Laughs) Of humans, at least. You would not be able to assemble a jury of people who come from where you committed the crime because there are no people there.

Prof. KALT: Right. And in the Montana portion, there are about 40-plus people of jury age, and it might be hard to get a jury of 12 out of that.

SIEGEL: So after committing a crime in the Idaho portion of Yellowstone National Park, one could claim, `There is no way I could possibly have the kind of trial guaranteed me by the Constitution of the United States, and therefore you can’t try me.’

Prof. KALT: That would be the argument.

As Matthews notes, this jurisdictional issue did come up for the first time several years ago:

Michael Belderrain, who had illegally shot an elk in Montana in December 2005, cited Kalt’s article in his own defense in July 2007. Belderrain was standing in Yellowstone when he fired the shot, and dragged the elk’s head to a truck parked in Yellowstone, so he was indicted in the US District Court for the District of Wyoming. He objected that he had a right to be tried by jurors from the Montana portion of the park. That’s actually somewhat possible, as the Montana part of Yellowstone is inhabited, but there are few enough residents that a trial would be difficult.

Rather than try to call such a jury or present an argument for why the Sixth Amendment did not entitle Belderrain to such a trial, the court dismissed the argument out of hand, precisely because it would imply that Yellowstone contains a Zone of Death. There were three problems with this. First, as Kalt notes, Congress implies there’s a Zone of Death, not the attorney making the point in court. Second, the ruling was about Montana, in which there wouldn’t be a Zone of Death even if the court accepted Belderrain’s reasoning due to people living in the Montana portion of Yellowstone. Third, the court flagrantly ignored Article III of the Constitution’s separate right to a trial in the state of the crime by not moving the trial to Montana.

Belderrain ended up entering into a plea deal rather than testing the issue on appeal. However, one would think that Congress may want to address this issue before a Court has to do so in a more serious case.