While the world pays attention to Syria and Iraq, Yemen is once against lurching into chaos. 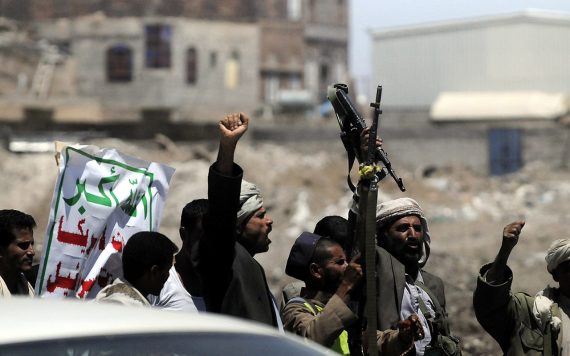 While the world is paying attention to Syria and Iraq, a Shiite rebellion in Yemen is gaining some stunning momentum in its own war against the government:

In a stunning sweep of the Yemeni capital, the country’s Shiite rebels seized homes, offices and military bases of their Sunni foes on Monday, forcing many into hiding and triggering an exodus of civilians from the city after a week of fighting that left 340 people dead.

It was the latest development in the Hawthi blitz, which has plunged volatile Yemen into more turmoil, pitting the Shiite rebels against the Sunni-dominated military and their Islamist tribal allies.

The heavily armed Hawthi fighters on Monday seized tanks and armored vehicles from military headquarters they had overrun, and raided the home of long-time archenemy Maj. Gen. Ali Mohsen al-Ahmar, the commander of the army’s elite 1st Armored Division and a veteran of a series of wars against the Shiite rebels, as well as residences of top Sunni Islamist militiamen or the fundamentalist Islah party.

Al-Ahmar himself fled and was forced into hiding, along with his followers, as the U.N. envoy to Yemen, Jamal Benomar, succeeded in mediating a deal on Sunday between the Shiite Hawthis and their rivals and the fighting died down. But the Hawthis made no concessions.

After flooding into Sanaa, the Hawthis also took strategic installations and key state buildings, though they claimed later to have handed them back to the army’s military police.

Thousands of Hawthi fighters — including many youths — were the only visible force Monday on the streets of the capital. They drove army tanks and armored vehicles they looted from al-Ahmar’s forces out of the city, heading north, likely to the Hawthis’ heartland in the city of Saada.

The group’s spokesman Mohammed Abdul-Salam said the rebels will hunt down those who committed violence against them, indicating the possibility of wider revenge attacks against opponents.

Observers say the Hawthis’ battlefield success reflects a major change in Yemen’s political landscape, with traditional sources of power — Sunni Islamists, allied army generals and tribal chiefs — losing their grip as the central government gave in to the Shiite rebels to avert a full-blown civil war.

Mansour Hayel, a Yemeni political analyst, compared the Hawthi sweep to the rampage in Iraq and Syria by Sunni militants from the Islamic State group.

“The situation is very disturbing,” Hayel said. “The state withdrew its control over institutions and the Hawthis and their affiliates replaced it. They are all over the city.”

Ibrahim Sharqieh, deputy director of the Brookings Institution’s Doha Center, says that the current events in Yemen are the result of the rest of the world abandoning Yemen:

DOHA, Qatar — IN 2011, Yemenis rejoiced at the toppling of their dictatorial president, Ali Abdullah Saleh, who had ruled for 33 years. It was the third successful revolution of the Arab Spring, following the overthrow of dictators in Tunisia and Egypt. But, as elsewhere, reconciliation did not follow revolution.

Over the weekend, after a weekslong siege of Sana, the capital, rebels suddenly ousted Yemen’s prime minister and captured the Defense Ministry, the government television station and the central bank. On Sunday, President Abdu Rabbu Mansour Hadi signed an agreement dictated by the rebels, known as the Houthis, and facilitated by a United Nations envoy.

The agreement calls for a new prime minister, a plan to devolve power from the capital and a reduction in fuel prices — a major issue that the rebels had seized on to justify their protests. At the same time, however, the Houthis refused to sign the security clauses of the agreement that called for the withdrawal of their forces from Sana and several other areas they had seized.

President Hadi, and his government — including Prime Minister Mohammed Salem Basindwa, who just stepped down — failed miserably to deliver basic services, spur economic development and, most important, create jobs. Unemployment was one of the main drivers of the revolt against Mr. Saleh.

The international community should have supported Yemen to ensure its successful transition to stability and development. Instead, the international community largely turned its back on Yemen as it sank further into poverty, chaos and extremism. The United States concentrated almost solely on counterterrorism, continuing its drone strikes on Qaeda militants. Saudi Arabia turned its attention to other parts of the region, ignoring the potential chaos on its southern border.

The United States is unlikely to take action: Fighting the terrorist group the Islamic State takes precedence over challenging Iran’s growing influence in the region. Houthis are enemies of Al Qaeda in the Arabian Peninsula, and the rebels’ coming to power in Sana will provide a de facto assurance to America with respect to Al Qaeda. The recent statement by Secretary of State John Kerry that even Iran has a role in fighting the Islamic State suggests that America will prioritize accommodation with Iran and the Houthis in Yemen over a peaceful and inclusive movement toward a stable democracy.

To a large degree, of course, what has happened in Yemen over the past several years is just another example of the chaos that has swept across the Arab world in the wake of the Arab Spring in 2011 and the protests, protests that often led to violence, many of which led to the ouster of long-serving authoritarian dictators in nations such as Tunisia, Egypt, Libya, Syria, Baharain, and Yemen itself. Of these nations, only Tunisia seems to have mostly escaped the post-2011 chaos in relative easy. In Libya, the Arab Spring quickly turned violent and led to a civil war that, without outside intervention, led to the ouster of one of Africa’s most authoritarian rules, but the nation has now descended into chaos as rival bands of jihadists seek to press their advantage against a weak and disorganized government. In Egypt, a month of protests seemingly led to the end of five decades of military rule only to see the nation’s first democratically elected President overthrown in a military coup. In Syria, of course, we have a civil war that has spilled across the border and created problems for pretty much every nation that borders it. Bahrain remains relatively stable, but that seems to be largely due to repression of Shiite political voices by the government, which strikes me as being a very short term solution. And, of course, Yemen itself has been a stable with its own stability issues that existed long before the Arab Spring, which is one of the reasons that it quickly became a secondary base for al Qaeda after the U.S. war in Afghanistan began.

While I’m not going to claim to be an expert on the situation in Yemen itself, it strikes me that Sharqieh’s seeming indictment of the west is largely misplaced. Yes, it’s true that American policy there has largely been focused on counterterrorism, but that seems like a wise strategy given the fact al Qaeda in the Arabian Peninsula has been among the most active al Qaeda offsets in the years since the September 11th attacks. By contrast, Sharqieh’s contention that the west should have, in effect, engaged in nation building in Yemen ignores the fact of just how difficult such an undertaking actually is, especially in a nation already torn apart by competing rebellions and the presence of a strong and committed terrorist group. We haven’t exactly done well with “nation building” in Iraq or Afghanistan, and we’ve had troops on the ground to try to enforce stability in those cases. Trying to create stability out of the chaos of a nation like Yemen seems to be like a tall order indeed.

I’m not sure there is a solution to what’s going on here any more than there is a solution to what’s happening in Libya and Syria, or the way that events unfolded in Egypt. At the very least, the years since the Arab Spring, and the chaos that Iraq has descended into thanks in no small part to the war we fought there from 2003-2011, should serve as a lesson that we don’t have nearly as much control over the events of the world  as we think we do and that we need to think before we act much more than we do today. It shouldn’t be that surprising that the removal of long-serving dictators who spend decades repressing political dissent and ethnic and religious minorities has led to chaos now that these dictators are no longer in power. The Arab Spring, of course, was something that was beyond our control, but Iraq was not. In either case, the events unfolding today should cause us to abandon the hubris that we can guide the domestic politics of foreign nations in the way that people like Shariqeh seems to suggest.