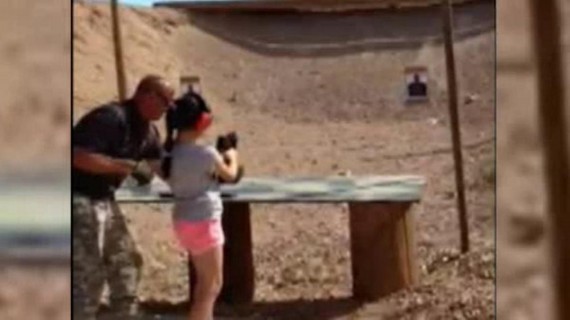 A weapons instructor in Arizona is dead after being shot by an Uzi that he was teaching a nine year old girl how to use:

The authorities in Arizona on Wednesday were investigating what went wrong after a 9-year-old girl firing an Uzi submachine gun at a shooting range accidentally killed the instructor who had been showing her how to use it.

Charles Vacca, 39, died Monday, after the girl pulled the trigger of the Uzi and was apparently unable to control the recoil of the automatic weapon. A video of the episode shows the girl, wearing pink shorts, a gray T-shirt and a ponytail, firing a single shot. After the instructor switched the gun to automatic mode, she fired a barrage of bullets, her left arm drifting leftward from the force of the spray, toward where her instructor was standing over her.

The girl, whose name has not been released, was at the range with her parents, the authorities said.

The shooting range, Bullets and Burgers, is in the Mojave Desert just over the Arizona border from Nevada, near a highway popular with tourists that connects Las Vegas to the Grand Canyon. The range’s website advertises four-hour tour packages in which tourists can be picked up at their hotels, driven to the property and given “the opportunity to fire a wide range of fully automatic machine guns and specialty weapons.” Lunch is served, and guests can have videos taken of their shooting experience.

Some ranges prohibit young children from handling heavy weaponry, but this one allows children as young as 8 to participate. The Bullets and Burgers website offers an array of weaponry that its customers can sample, which include grenade launchers. It reads in part: “Shoot a wide variety of fully automatic machine and belt fed guns including the AK-47, Colt M-16, MP5/40, FN FAL, Bren, M4, M249, M60, PKM, and M203 Grenade Launcher.”

A video of the 9-year-old that cuts off just before the fatal shooting shows Mr. Vacca giving the girl basic instructions about the operation of the Uzi, a compact, powerful weapon designed for the Israeli military in the 1950s. The weapon, known for its ease of handling and simple design, has been featured prominently in popular movies and video games.

In the video, the girl is shown holding the Uzi while Mr. Vacca instructs her where to place her hands and how to position her legs.

“There you go, just like that,” Mr. Vacca tells her as the girl places her left leg in front of her right while handling the weapon.

Mr. Vacca is then shown making an adjustment to the weapon. He then places one hand on the girl’s back to help steady her and uses his other forearm to help raise the barrel of the weapon. He appears to tell her to fire again.

But the weapon swings up and to the left, where Mr. Vacca is standing over the girl’s left shoulder. At that point, the video ends.

How anyone thought this was a good idea is beyond me. The girl’s parents are stupid for allowing this to happen and the instructor is stupid for participating in it. The only truly innocent party in all of this is the child, who will have to live with this moment the rest of her life.

FILED UNDER: Guns and Gun Control, Law and the Courts, Quick Takes