Cellphones have achieved near complete market penetration, and the smartphone is leading the way.

According to a new study, more than 90% of American adults now have a cell phone of some kind:

Just a quick note for your next PowerPoint deck on megatrends: more than 90 percent of adults now have a cell phone, according to the Pew Research Center’s Internet & American Life Project. For people under the age of 44, that number is closer to 97 percent.

Pew calls the cell phone the fastest-adopted device in history. These things aresubject to some variability because of when we start the clock, but the cellphone adoption rate is certainly up there with the radio and color TV, and far faster than computers or landline telephones.

Of course, not all of those “cell phones” are smartphones like the iPhone or Android based phones. There are plenty of “dumb phones” out there in the hands of people who have no desire to have such a device, or who simply cannot afford one. At the same time, though, the smartphone is slowly but surely taking over the market:

For the first time since the Pew Research Center’s Internet & American Life Project began systematically tracking smartphone adoption, a majority of Americans now own a smartphone of some kind. Our definition of a smartphone owner includes anyone who says “yes” to one—or both—of the following questions:

Taken together, 61% of cell owners said yes to at least one of these questions and are classified as smartphone owners. Because 91% of the adult population now owns some kind of cell phone, that means that 56% of all American adults are now smartphone adopters. One third (35%) have some other kind of cell phone that is not a smartphone, and the remaining 9% of Americans do not own a cell phone at all.

This chart shows just how much the breakdown between smartphone, cell phone only, and no cell phone has changed in just the past two years: 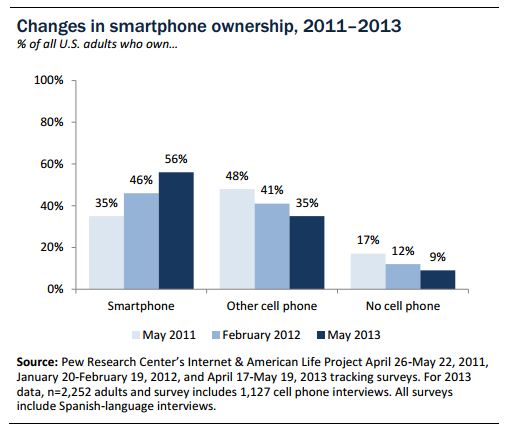 And this chart shows the unsurprising fact that smartphone ownership is heavily influenced by income and age: 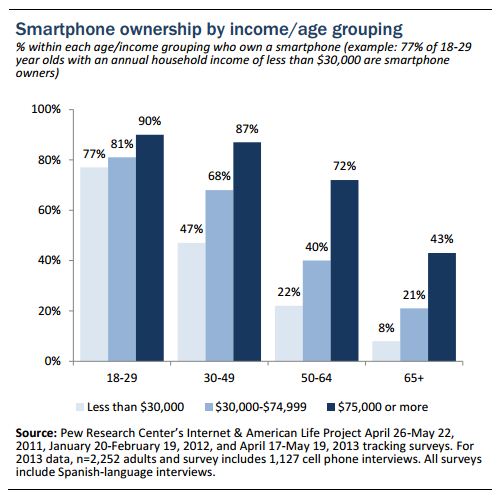 When business execs talk about how commerce and media are going to migrate faster and faster from computers on our desks to little handheld screens, this is why. The market isn’t even close to saturated. And as smartphones inevitably become commodities — just imagine the day that we look back at the iPhone the same way we do now at Nokia’s little candy-bar handsets — the mobile class divide will fade as well. Our national smartphone addiction is just getting started.

The extent to which the market has changed can be seen by visiting any storefront operation of one of the major cell phone companies such as Verizon, AT&T, or Sprint. Where once the displays in the store would predominantly feature what we now call “dumb phones,” with smartphones tucked away in a corner for those interested in them, today it’s the complete opposite. The stories prominently feature smartphones, and indeed iPads and other tablet devices that access cellular data networks, while the “dumb phones” are tucked away in increasingly small display. Obviously, part of the reason for this is that there’s a business interest on the part of the carrier to push smartphones over “dumb phones” is that the smartphones generate more revenue for the carrier. This is especially true in the area of mobile data now that consumers are using their smartphones to watch videos, and even entire television shows, on their phones and tablet devices.

Even factoring that into account, the shift to smartphones is clearly happening, according to the Pew Research poll they now comprise a majority of the cell phones owned by Americans. And this has all been happening while the nation still struggles with an economy that isn’t exactly growing and persistently high unemployment that’s lasted four years now. That trend only going to increase as time goes on. There will still be “dumb phones” with us, of course. Some people, especially older Americans quite obviously prefer them and have no need for a constant Internet connection. Moreover, those “dumb phones” still remain immensely popular in Africa, India, and other parts of the world where mobile data networks are nonexistent and people can’t necessarily afford a flashy new iPhone or Samsung Galaxy 4s. That’s going to start changing at some point, though, and smartphones will start to penetrate all corners of the world. Welcome to the future.