Afghan Elections Once Again Marked By Allegations Of Fraud

Afghanistan's parliamentary elections were marked by another round of allegations of widespread voter fraud, once again bringing to the forefront the question; what exactly are we trying to accomplish in Afghanistan ? 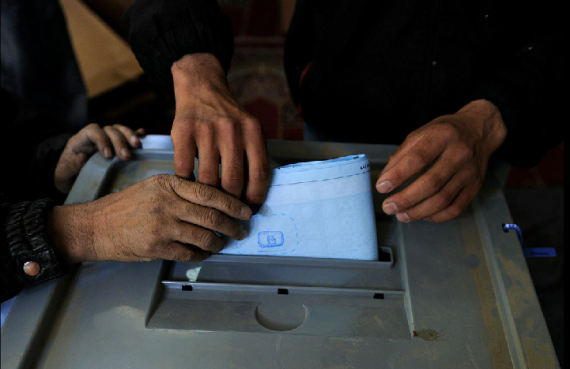 Yesterday’s parliamentary elections in Afghanistan are being accompanied by yet another round of allegations of widespread election fraud:

A day after Afghan parliamentary elections, scores of accounts of local ballot stuffing as well as the suppression of voting like that in Nagahan are beginning to surface, especially from the troubled provinces in the south and east. It is too early to say how widespread the problems were, but in several provinces there were certainly irregularities, if not outright fraud, intended to help particular candidates.

“There’s not, so far, a clear indication of massive or systematic fraud, but there will very likely be quite a few cases of retail fraud combined with widespread irregularities,” said Staffan de Mistura, the United Nations special representative here.

But retail, or localized, fraud is often all that is needed to sway parliamentary elections where the margins can be tiny. Each province is allocated seats in Parliament based on a rough estimate of its population. (There has not been a census in decades.) The top vote getters in each province win the seats.

In Herat Province, for instance, there are 17 seats, five reserved for women and 12 for men. So from a field of about 125 male candidates, the top 12 will go to Parliament. While the candidates at the very top may amass tens of thousands of votes, at the bottom, where 2,500 votes may be enough to win the 12th slot, the margins tend to be smaller.

At that level, it does not require much to tip the balance, and candidates who think they are close may try anything to manipulate the system, said Martine van Bijlert, a political analyst for the Afghan Analysts Network, who has tracked elections for the past several years here.

At a polling center at Ghazi Khan High School in Kunduz, journalists and observers watched as election officials and supporters of some candidates locked the doors for two hours and filled out ballots themselves.

The Free and Fair Elections Foundation complained that in nearly 3,000 polling centers — or more than half of the total — its monitors discovered that the ink being used to mark voters’ fingers, and prevent repeated voting, was easily washed off, even though it was supposed to have been indelible.

And if those are the examples where the fraud was actually discovered, once can imagine that similar incidents went undetected throughout the country and that, much like the 2009 Presidential elections, the results, whatever they might be, will be tainted both internationally, and in the minds of the Afghan people, as tainted and illegitimate. Hamid Karzai, after all, is currently President of Afghanistan because he “won” an election that his opponent refused to accept as legitimate after it was clear that the run-off would be tainted by the same fraud that tainted the first round of the elections. The United States accepted the result because we had to, and because getting directly involved in the selection of the leader of Afghanistan would have been akin to President Kennedy’s involvement in the course of events that led to the assassination of Ngo Dinh Diem in 1963, an action which made further American involvement in Vietnam virtually inevitable.

All of this, of course, bring up yet again, the question of what exactly the United States is doing in Afghanistan, whether we can accomplish the goals we’ve set forward, and whether we should even try to accomplish those goals. If nothing else, the brief history of “democracy” in Afghanistan reveals it to be largely a fraud. It’s not even so much that the country is under the control of a tinpot dictator in Kabul and his cronies, though, because the truth of the matter is that the national government appears to have very little real support outside the capital itself. Afghanistan still is, as it has been for centuries if not millennia, a tribal society, and it’s the tribes that have the real control. Added to this is a populace with one of the lowest literacy rates in the world. Pretending we can create a democratic society in such conditions is both foolish and naive.

So, here we are again with another round of elections conducted by our putative ally that are plainly fraudulent. The Afghan people know their “democracy” is a fraud, and the Taliban and their allies stand ready to exploit that, and it seems likely that whatever confidence remains in the central government will slip away. Meanwhile, the question remains — Why are we still in Afghanistan ? What is it that we’re defending there ? And, most importantly, when we will know we’ve succeeded ?