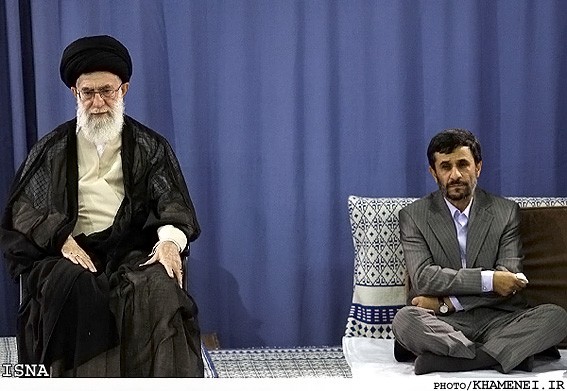 Dodd Harris has already noted the more bizarre aspects of the power struggle between Iranian President Mahmoud Ahmadinejad and Iran’s Supreme Leader Ayatollah Khameni, but yesterday that power struggle seemed to turn more serious as it entered the mosques:

The unprecedented power struggle between the two most powerful leaders in Iran deepened Friday, spilling out into Tehran’s public prayers where the mullah leading the service indirectly criticized President Mahmoud Ahmadinejad while the crowd chanted “Death to opponents of the supreme leader!”

The split started about two weeks ago after the president tried to dismiss the head of the intelligence ministry, the powerful government branch that exerts widespread control over domestic life. Ayatollah Ali Khamenei, the supreme leader, ordered that the minister, Heydar Moslehi, keep the post.

Mr. Ahmadinejad then stayed home for 11 days, according to reports from Iran, engaging in a visible fit of pique that threatened to undermine the staunch alliance the two had forged since Mr. Ahmadinejad was first elected president in 2005.

The spat dragged into the open several factional fights, analysts said, particularly the efforts by Mr. Ahmadinejad’s conservative opponents to prevent his faction from dominating the parliamentary elections next March and even the presidential vote in 2013.

Even before the chants at Friday Prayer, a signature event since the 1979 Islamic Revolution, important conservative factions had pronounced their support for the supreme leader, including the government’s primary enforcers, the Revolutionary Guards. Ayatollah Khamenei’s infallibility was the subject of Friday Prayer in at least half a dozen large cities besides Tehran, according to media reports.

“It is quite astounding in a way where on a daily basis people are coming out and saying that Khamenei has the constitutional right and the religious right to do what he wants to do,” said Farideh Farhi, an Iran expert at the University of Hawaii. “Ahmadinejad has effectively lost the support of the base. If you do not have the support of Khamenei, you are nobody.”

Under Iranian law, the president has the right to hire and fire cabinet ministers, Iran experts said. But the supreme leader, as the title suggests, is the nation’s ultimate authority.

Whether this will lead to Ahmadinejad’s downfall is hard to tell, of course, but it’s worth noting that this is yet further evidence against those who point to him as the sole voice of the Islamic Republic.