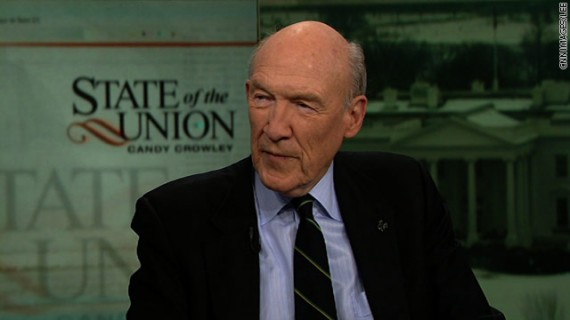 Former Republican Senator Alan Simpson, one of the loudest deficit and spending hawks during the Reagan era, said in Colorado recently that his party’s position on taxes makes no sense at all:

“I feel I have achieved a remarkable success, because at this stage of life I have achieved a goal: I have effectively pissed off everybody in the United States,” he said, referring to the backlash from across the political spectrum to the Simpson-Bowles commission’s report.

Everyone has an ox that gets gored, Simpson suggested, but that’s the only way to approach a balanced budget. While the report’s heaviest critics have been interest groups alarmed by proposed spending cuts — including the American Association of Retired Persons, a lobbying group Simpson termed “38 million people bound together by a common love of airline discounts” — Simpson argued as vigorously for tax increases to help balance the budget.

Simpson said he confronted anti-tax crusader Grover Norquist when the commission met and they exchanged words over the legacy of Ronald Reagan, claimed by both as their personal hero. When Reagan was president, he raised taxes 11 times, Simpson said, a bit of history that made Norquist squirm.

“I knew Ronald Reagan and you, Grover, are no Ronald Reagan,” Simpson said he told the president of Americans for Tax Reform, who famously said his goal was to make government small enough it could be drowned in a bathtub. Reagan didn’t raise taxes to give Norquist something to complain about, Simpson said. “He probably did it to make the country run.”

“We’ve never had a war with no tax to support it, including the Revolution,” Simpson said, after pointing out that taxes account for an increasingly smaller share of the economy. But the harsh partisan atmosphere in Washington makes any discussion of tax increases dangerous, Simpson said. “People are told in Congress if they raise taxes by a nickel, they’ll be strung up by their heels in the town square.”

Simpson is right, especially his points about Reagan and his comments about the fact that we’ve gone ten years fighting two wars, not to mention increasing domestic spending and adopting a brand new entitlement program during the Bush Administration, without raising taxes at all. That’s just fiscal stupidity.

Of course, by the end of the day, I’m sure Simpson will have been denounced as a RINO by all the appropriate Republicans.