Analyzing The Battle Of Hoth 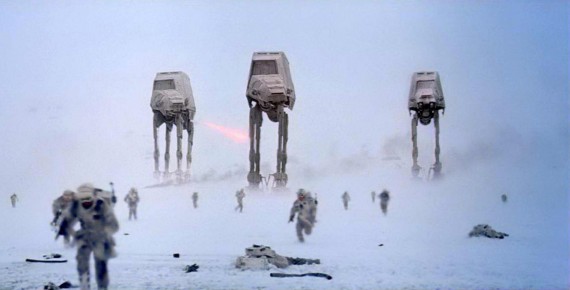 Spencer Ackerman analyzes the Battle of Hoth and doesn’t come away thinking very much of the Imperial Commander:

What did the Empire gain at Hoth? It had the opportunity to deal the Rebel Alliance a defeat from which the Rebels might not have recovered: the loss of its secret base; the loss of its politically potent symbol in Leia; and most of all the loss of its promising proto-Jedi in Luke. Instead, Luke escapes to join Yoda; Leia escapes with Han to Cloud City (where Vader has to resort to Plan B); and the Rebel Alliance’s transport ships largely escape to join up at a pre-established rendezvous point, as we see at the end of the film.

At the very most, the Empire’s assault on Hoth killed a couple of low-ranking Rebels and destroyed a few transit ships — which we don’t even see on screen. Instead of crushing the Rebels, it scattered them, leaving them to survive for the additional successes they’ll achieve in Return of the Jedi. It’s a classic fiasco of overconfidence and theology masquerading as military judgment — and the exact opposite of the Empire striking back.

Not everyone agreed with Ackerman’s take, though, so he followed up with a “symposium” of other analysts who disagreed with his take. Here’s a sample:

Vader wasn’t a strategist, he was a tragic hero. He was Anakin Skywalker, supremely talented, painfully sensitive, devilishly impatient, stubbornly sure of his own rightness, and most of all ruled by instinct and emotion. Anakin Skywalker never listened much to what other people wanted him to do, no matter their nominal authority over him. He ignored his mother and Qui-Gon, resisted Obi-Wan on matters large and small, and defied the Jedi Council. He was passionate and impulsive, prone to leaping before he looked and taking off on unapproved missions if he felt they were right. He hared off to Tatooine after his mother against Obi-Wan’s orders. He married Padme in violation of the Jedi Code.

As unsuccessful as George Lucas might have been in depicting this, Anakin loved Padme so passionately and so beyond reason that he was willing to burn down the whole galaxy for just a chance to save her. Luke was his son, and more importantly, Luke was Padme’s son. As soon as Vader knew he was out there, Palpatine’s wishes no longer mattered, and Vader was once more in service only to his own motivations. He continued to follow the Emperor’s orders where it was convenient for him, but on Hoth and everywhere else for the rest of the series, he was doing what he wanted, to the inevitable detriment of the Empire’s military effectiveness.

Much more at both links.