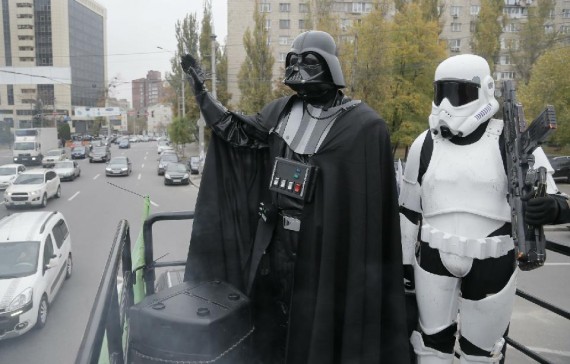 Among the candidates in today’s parliamentary elections in Ukraine is a Dark Lord of the Sith:

One candidate in Ukraine’s parliamentary elections hopes to bring voters to the dark side: Darth Alekseyevich Vader.

Dressed in full Star Wars regalia, Vader prowls the streets of Kiev atop his black campaign van wooing voters with promises to turn Ukraine into a “galactic empire.” So serious is he about his mission that he even legally changed his name toDarth Vader ahead of the elections (He was previously known as Viktor Shevchenko.)

The electrician-turned-interplanetary warlord insists his Internet Party is serious business.

Speaking to The Associated Press on his van, flanked by Stormtroopers and shrouded in white fumes, Vader explained that his top goal is to computerize all government business.

“When I get to parliament, I will expel all the deputies. They have proven their uselessness,” he said. “Computers will work in their place and they will fulfil their functions without cease.”

Pollsters predict the party, which also includes a Stepan Chewbacca on its list, has little chance of getting into parliament in Sunday’s vote. Still, the public greets Vader enthusiastically when he drives around the capital atop his van — which he refers to as “my helicopter.”

To the ominous backdrop of the Imperial March theme from Star Wars, he thundered from the top of his van that he would win the war against separatist rebels in the east — even as he withdrew government troops. And he vowed to reclaim the Crimean Peninsula, which was annexed by Russia in March.

How will he achieve these feats?

“A military space station will be built,” he said, “that will protect the whole territory of Ukraine.”

Given the estimated cost of building a Death Star, I am not sure that this is an option that Ukraine is in a position to pursue. Of course, I am sure Vader finds my lack of faith disturbing.

Update: Unfortunately, Vader discovered today that he was unable to vote for himself:

A Parliamentary candidate named “Darth Vader” was denied the opportunity to case his ballot after he refused to remove his mask at a polling station.

Vader arrived at the polling place sitting atop a black van while “Imperial March” blasted on the street. After showing his passport to an election official, he was asked to remove the mask. He refused to do so, and left the polling place to return to his fancy van. 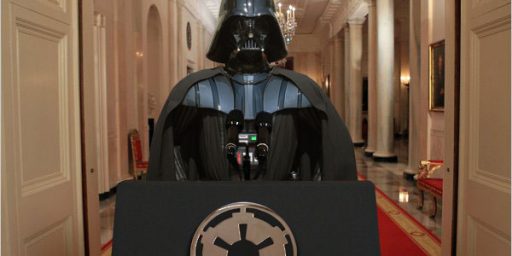 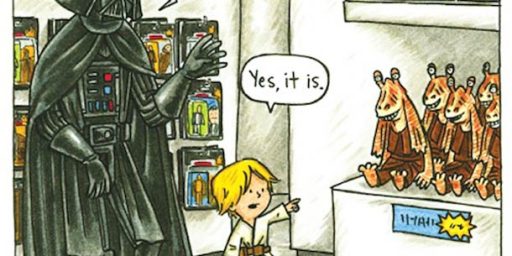