Andrew Sullivan, perhaps the man most responsible for putting the notion of marriage equality into the national debate, has come out of his blogging retirement to weigh in on yesterday's historic ruling. 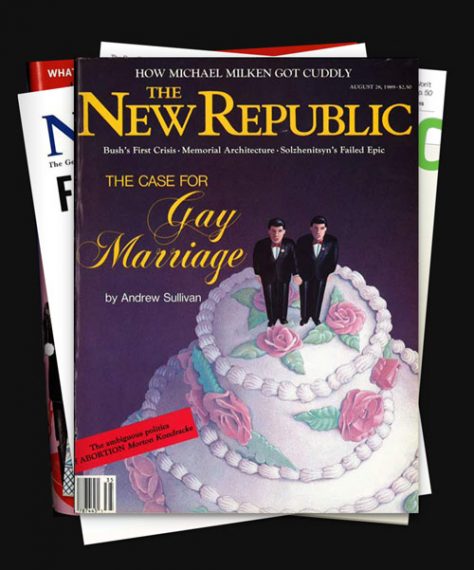 Andrew Sullivan, perhaps the man most responsible for putting the notion of marriage equality into the national debate, has come out of his blogging retirement to weigh in on yesterday’s historic ruling.

In fact, we lost and lost and lost again. Much of the gay left was deeply suspicious of this conservative-sounding reform; two thirds of the country were opposed; the religious right saw in the issue a unique opportunity for political leverage – and over time, they put state constitutional amendments against marriage equality on the ballot in countless states, and won every time. Our allies deserted us. The Clintons embraced the Defense of Marriage Act, and their Justice Department declared that DOMA was in no way unconstitutional the morning some of us were testifying against it on Capitol Hill. For his part, president George W. Bush subsequently went even further and embraced the Federal Marriage Amendment to permanently ensure second-class citizenship for gay people in America. Those were dark, dark days.

I recall all this now simply to rebut the entire line of being “on the right side of history.” History does not have such straight lines. Movements do not move relentlessly forward; progress comes and, just as swiftly, goes. For many years, it felt like one step forward, two steps back. History is a miasma of contingency, and courage, and conviction, and chance.

I think of the gay kids in the future who, when they figure out they are different, will never know the deep psychic wound my generation – and every one before mine – lived through: the pain of knowing they could never be fully part of their own family, never befully a citizen of their own country. I think, more acutely, of the decades and centuries of human shame and darkness and waste and terror that defined gay people’s lives for so long. And I think of all those who supported this movement who never lived to see this day, who died in the ashes from which this phoenix of a movement emerged. This momentous achievement is their victory too – for marriage, as Kennedy argued, endures past death.

I never believed this would happen in my lifetime when I wrote my first several TNR essays and then my book, Virtually Normal, and then the anthology and the hundreds and hundreds of talks and lectures and talk-shows and call-ins and blog-posts and articles in the 1990s and 2000s. I thought the book, at least, would be something I would have to leave behind me – secure in the knowledge that its arguments were, in fact, logically irrefutable, and would endure past my own death, at least somewhere. I never for a millisecond thought I would live to be married myself. Or that it would be possible for everyone, everyone in America.

TNR appends this to the top of Sullivan’s original cover feature:

It’s become almost a cliché: “It happened so fast!” Indeed, in many respects, the shift has been sudden. Barely three years ago Vice President Joe Biden let slip his support for gay marriage, prompting President Barack Obama to endorse it a few days later. At that time, same-sex marriage was banned in two-thirds of U.S. states; that was still true of a majority of states at this time last year.

But the recent suddeness of marriage equality can not eclipse the hard-fought efforts of this decades-long civil rights struggle. The New Republic, led by the eloquently pugnacious Andrew Sullivan, first put the case for gay marriage on its cover in 1989, and the magazine has been accelerating the debate ever since.

Despite my reservations about the process that got us to this point, I’m very happy for Andrew and for my country that we’ve arrived. What was quite literally a laughable notion 25 years ago is now a legal right across the land. It’ll be far fewer than another 25 years before we wonder what the fuss was all about.

Is Same-Sex Marriage Now A Wedge Issue For Democrats?