Another Month, Another Disappointing Jobs Report

Going into today’s release of the August report from the Bureau of Labor Statistics, most analysts were actually expecting some fairly decent news. Based on the upward revisions to 2nd quarter GDP and signs that the auto industry was moving along quite nicely, the anticipation was that the job market was doing relatively well and that we’d see a health job creation number. Some analysts even expected we’d see as many as 200,000 jobs created in August. As it turns out, though, the August numbers weren’t nearly that good, and the underlying data raises real cause for concern:

The nation’s employers added 169,000 jobs in August, slightly below what economists were expecting. The unemployment rate ticked down to 7.3 percent from 7.4 percent, but it fell largely because people dropped out of the labor force and so were no longer counted as unemployed.

In fact, the share of working-age Americans who were either working or looking for work was at its lowest level since 1978, a time when women were less likely to be participating in the labor force.

The report also contained large downward revisions to job growth in July and June. August’s growth was about in line with the average hiring rate so far this year, which has been steady but mediocre. If the economy were to fill the jobs gap left by the recession within the next four years, around 300,000 jobs a month would need to be created, according to the Hamilton Project at the Brookings Institution.

The latest numbers leave in question whether the Federal Reserve will start scaling back its stimulus measures after it meets Sept. 17-18, as Wall Street seems to expect. The Fed has been buying long-term Treasury bonds and mortgage-backed securities in order to keep long-term interest rates low, and the Fed chairman, Ben S. Bernanke, has said that the central bank will reduce the rate of those purchases “later this year.”

Friday’s somewhat disappointing jobs report, released by the Labor Department, came on the heels of some positive economic reports that had helped reinforce Wall Street expectations that “tapering” would come in September.

“We still expect the Fed to go ahead with the taper later this month,” said Paul Ashworth, chief United States economist at Capital Economics. But he acknowledged that the latest jobs report was “mixed bag that can be used to support an immediate tapering of the Fed’s monthly asset purchases or delaying that move until later this year.”

Health care, retail and food services were among the industries that added jobs, while payrolls fell in the information industry. Government employers, which have generally been shrinking in the last few years, added workers in August.

Employment gains in the recovery have been disproportionately in lower-wage sectors like food service and retail, causing concern about not only the quantity of the new jobs but also their quality. The industries are more likely to hire part-time workers and operate on just-in-time schedules, making it difficult for employees to predict how many hours they will have from week to week.

As of August, there were 7.9 million Americans who wanted to work full time but could find only part-time work. When these workers and people who want a job but have stopped looking are included, the total underemployment rate rises to 13.7 percent.

When you look deeper into the BLS report, though, that 169,000 net job number, along with the drop in the unemployment rate, don’t look as good as they seem. First of all, there’s the fact that the jobs numbers for June and July were both revised downward by a net 74,000 jobs. June’s number went from +188,000 to +172,000, while July’s number was revised significantly downward, from +162,000 to +104,000. Secondly, the drop in the top line unemployment rate number is due almost entirely to the fact that 312,000 people left the job market in August, meaning that the the labor force participation rate fell from 63.4% to 63.2%, a level unseen since August 1978. To put that in perspective, if the participation rate were at the same level it was in January 2009 during the height of the recession, the unemployment rate for last month would have been 10.8%.  A related number, the US employment rate stands at 58.6%, the same point it was at in January of this year which suggests that the labor market over the past eight months has been essentially flat.

Now, there are a number of factors that contribute to the drop in labor force participation, including the aging of the labor force and people retiring. However, even factoring that in, it seems fairly clear that there’s a large segment of the workforce that has quite simply given up looking for work. Those people, however, still have to support themselves somehow. Some of them are likely relying on other family members for help, others have sought out government assistance, and some may be lucky enough to have savings to fall back on. That’s not a situation that can last forever, though, and absent some real progress in job creation, which we’ve been waiting for over the past 4 and a half years or so, that population is going to be a problem going forward. Notwithstanding the spin that White House spokesmen are likely to put on these numbers, in other words, this was not a good jobs report.

That’s something that Neil Irwin agrees with:

If you only looked at the headlines on Friday’s August jobs numbers, you’d think “Not bad!”

You would also be completely wrong.

Yes, the unemployment rate fell a notch to 7.3 percent, from 7.4 percent in July. Yes, the nation added 169,000 jobs, broadly consistent with the pattern of recent months.

But in almost all the particulars, you can find signs that this job market is weaker than it appeared just a few months ago, and maybe getting worse. The drop in the unemployment rate was caused by 312,000 people dropping out of the labor force. The number of people actually reporting having a job actually fell by 112,000 in the survey on which the unemployment rate is based.

And while the overall August jobs number was okay, the Labor Department revised down its estimates of June and July job creation by a combined 74,000 positions. In other words, through the summer, hiring has been quite a bit shakier than it had appeared.

Jobs numbers ebb and jobs numbers flow, and as always, it would be unwise to make too much of one report. But this one has enough signs of weakness embedded in enough places that it has to make economy-watchers — including those at the Federal Reserve who meet in less than two weeks — reassess their confidence that a solid, steady jobs recovery is underway.

Consider this: The nation has averaged 148,000 new jobs a month for the last three months. The number was 160,000 for the last six months, and 184,000 a month over the last year. That looks to me like a downward trend, no two ways about it. It’s certainly not the gradual acceleration that most mainstream economists have forecast as 2013 advances and the impact of tighter fiscal policy fades.

Want another sign? The proportion of the U.S. population that had a job in August was 58.6 percent. Six months earlier, the number was a whopping — wait for it — 58.6 percent. The year is nearly three-quarters over, and the economy isn’t growing fast enough to put a higher proportion of its citizens back to work.

You don’t have to squint hard to see evidence that the “nice, steady improvement” theme that has been the conventional wisdom is missing part of the story.

One policy impact of this report is likely to be that the Federal Reserve may end up delaying the “tapering off” of quantitative easing that it has been talking about for months now. The stock market will likely react positively to that given the fact that the only real impact of that particular Fed policy has been to boost stock prices on Wall Street. As these number attest, it seems to be having very little impact in the economy as a whole. At the very least, though, it’s clear that while the stock market has been doing quite well, the economy as a whole is another story. We’re in a recovery, but it’s one of the weakest ones we’ve seen in a long time, something amply demonstrated by what has been called the scariest jobs chart ever: 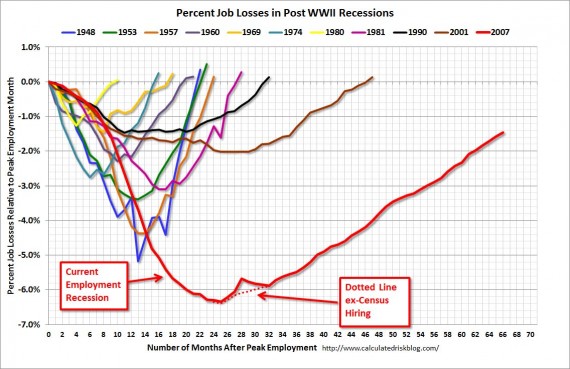 There’s not really any good news here folks, so there’s no use pretending otherwise.