The April Jobs Report was good, but not exactly anything to write home about.

The April Jobs Report ended up being better than anticipated, but we’re still at a level of jobs growth that is less than ideal for getting out of the jobs recession that  ended back in 2009 any time soon. Going into this morning, expectations were that we’d see about 150,000 jobs added, but as it turned out we did slightly better than that:

The unemployment rate, at 7.5 percent, changed little in April but has declined by 0.4 percentage point since January. The number of unemployed persons, at 11.7 million, was also little changed over the month; however, unemployment has decreased by 673,000 since January. (See table A-1.)

Among the major worker groups, the unemployment rate for adult women (6.7 percent) declined in April, while the rates for adult men (7.1 percent), teenagers (24.1 percent), whites (6.7 percent), blacks (13.2 percent), and Hispanics (9.0 percent) showed little or no change. The jobless rate for Asians was 5.1 percent (not seasonally adjusted),
little changed from a year earlier. (See tables A-1, A-2, and A-3.)

Bigger than the news that  April’s numbers beat expectations are the revisions that were made to previous month’s reports. February’s job creation numbers were revised upward from 268,000 to 332,000 and March’s were revised upward from 88,000 to 138,000. At the very least, these numbers are better than what they were initially reported to be, and the February numbers are the best we’ve seen in 2010 when one month’s report was boosted by temporary Census hiring, taking that month out of the equation and February is the best month we’ve seen in jobs growth since some time in 2005. If we were to have more months like this, then we could legitimately say that the economy, and the jobs market, is finally turning around. Unfortunately, it looks like February was something of an outlier. So far this year, we’ve added 148,000 jobs in January, 332,000 in February, 138,000 in March, and 165,000 in April. That’s an average of just about 195,000 jobs created per month, but if you take the February numbers out of the mix, and the average drops down to roughly 150,000 new jobs per month, which is barely above the level needed to match population growth.

New figures from the Bureau of Labor Statistics indicated that a light March payrolls report may have been an aberration, as higher taxes and reduced spending due to the fiscal stalemate in Washington failed to deter growth.

The unemployment rate edged lower to 7.5 percent, due partly to the jobs gains and to a labor-force participation rate that remains at a 35-year low.

Reuters, however, is more sanguine:

[S]ome details of the report remained consistent with a slowdown in economic activity. Construction employment fell for the first time since May, while manufacturing payrolls were flat.

The average workweek pulled off a nine-month high, with a gauge of the overall work effort falling, but average hourly earnings rose four cents.

The relative strength of the data was particularly surprising given other recent signs that suggested the economy had slowed sharply in recent weeks. Although the economy expanded at a 2.5 percent annual pace in the first quarter, a wide range of data suggested it ended the period with less speed. Further, factory activity barely grew in April.

Economists feared uncertainty over the full impact of higher taxes and deep government spending cuts on already sluggish demand was making businesses reluctant to hire. A 2 percent payroll tax cut ended at the start of the year, and $85 billion in federal budget cuts went into effect on March 1.

“The idea that the employment is holding as well as it is in the face of the fiscal headwinds the economy is currently enduring is a very positive sign of the economy’s underlying fundamental improvements,” said Russell Price, senior economist at Ameriprise Financial Services in Troy, Michigan.

While the pace of hiring was stronger than expected in April, it remained below the pace needed to put a significant dent in the jobless rate.

And The New York Times write-up is best described as cautious:

With the unemployment rate well above 6.5 percent, the Federal Reserve has promised to keep buying billions of dollars of bonds, in an effort to help bolster growth. The Fed’s stimulus efforts have helped buoy the markets, but the job picture has remained weak.

Economists also noted that the number of hours worked fell in April, another sign that the economy is having trouble generating enough additional income and jobs to help lift spending.

The government could be the wild card in the coming months. Automatic, across-the-board spending cuts officially went into effect in March, and if the mandated spending cuts continue, layoffs could increase. Apart from the job figures, the economy has been showing signs of weakness of late. Several indicators beginning in March have pointed to much slower growth, with everything from retail sales to manufacturing looking soft recently.

“What’s the biggest drag on the economy? The government,” said Diane Swonk, chief economist for Mesirow Financial in Chicago. “If the government simply did no harm, we could be at escape velocity.”

The question as we get further into the year will be whether we’ll continue to follow the pattern of the past several years in which job growth seemed to tick up early in the year only to slag off in intervening months. The data so far suggests that this is exactly what’s happening, and that means that the jobs market will continue to grow, weakly, for the foreseeable future. What we really need is growth on the level we saw in February, but we only seem to get anomalous months like that on an occasional basis anymore. As it is, it’s going to take a long time before this chart stops looking scary: 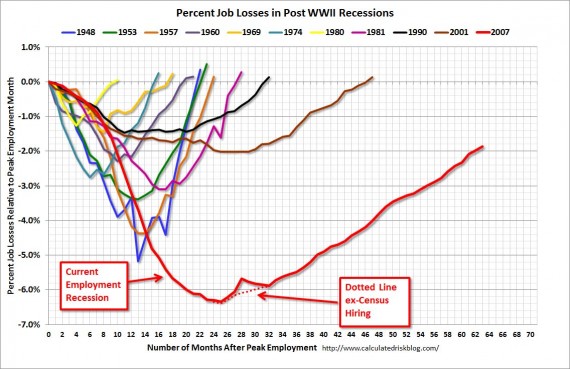 At our current rate, we won’t be back to where the job market was when the recession started until well after Barack Obama has left office.

The American economy continues to add jobs in proportion to population growth. Nothing less, nothing more.

The share of American adults with jobs has barely changed since 2010, hovering between 58.2 percent and 58.7 percent. This employment-to-population ratio stood at 58.6 percent in April. That is about four percentage points lower than the employment rate before the recession, a difference of roughly 10 million jobs. In other words, the United States economy is not getting any closer to recreating the jobs lost during the recession.

[T]he decline of labor force participation – the technical term for the share of adults working or searching – is primarily the result of a bad economy.

Baby boomers are aging into retirement. Even before the recession, the government projected in 2007 that participation would decline to 65.5 percent by 2016, from 66 percent. But the April rate of 63.3 percent means the labor force has lost roughly five million additional workers.

Furthermore, the projections were wrong. Participation has actually risen among people older than 55. The decline is entirely driven by younger dropouts.

The federal government counts 11.7 million Americans as unemployed. The real number, it follows, is more like 17 million.

In other words, there are millions of people who are basically sitting on the sidelines, not working and not looking for work. Until the jobs market picks up, they’re likely to stay there.