Since the Supreme Court handed down its decision in District of Columbia v. Heller four separate Federal appellate courts have ruled that state and local laws banning "assault weapons" do not violate the Second Amendment. 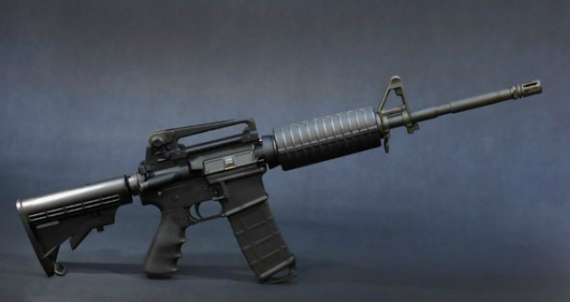 Last week’s massacre at Marjorie Stoneman Douglas in Parkland, Florida has, inevitably, has predictably revived the debate over gun control, and taking center stage in the debate is the idea of banning so-called “assault weapons,” or at least increasing the age limit to purchase such a weapon from 18 to 21. Inevitably, Second Amendment advocates have argued that such a move, or at least the effort to impose an outright ban, would be a violation of the right to keep and bear arms. As The Washington Post’s Meghan Flynn and Fred Barbash note today, though, so far every Federal Court of Appeals that has ruled on the issue has found laws banning such weapons to be acceptable under the Second Amendment, and there appears to be little chance of the Supreme Court intervening to say otherwise at any point in the near future:

Almost exactly a year ago, a federal appeals court considered whether a Maryland law banning assault weapons was unconstitutional.

The law was passed in the aftermath of the Sandy Hook massacre, which left 20 first-graders and six adults dead after a man bearing an AR-15-style weapon stormed the school in Newtown, Conn.

“Nine terrified children ran from one of the classrooms when the gunman paused to reload, while two youngsters successfully hid in a restroom,” Judge Robert B. King of the U.S. Court of Appeals for the 4th Circuit wrote in the majority opinion. ”Another child was the other classroom’s sole survivor. In all, the gunman fired at least 155 rounds of ammunition within five minutes, shooting each of his victims multiple times.”

The court ruled that the ban on assault weapons like the one Adam Lanza used at Sandy Hook — like the one that police say Nikolas Cruz confessed to using at Marjory Stoneman Douglas High School on Feb. 14 and that Omar Mateen used at Orlando’s Pulse Nightclub in June 2016 and Stephen Paddock used from the Mandalay Bay in Las Vegas on Oct. 1 — was constitutional.

The question of assault weapons was not addressed by the Supreme Court when, in 2008, it held for the first time in District of Columbia v. Heller that the Second Amendment protects an individual right to possess a firearm. Justice Antonin Scalia, writing for the court, went out of his way to say that the right “is not unlimited.”

In each case that has reached a federal appeals court since then, bans on the semiautomatic guns known as assault weapons have been upheld, usually for the same two reasons.

Banning them, the courts have said, does not curtail the right of self-defense protected by the Constitution. There are plenty of other weapons — handguns and regular long guns — available to people to protect themselves.

At the same time, the courts have said, states and municipalities have legitimate reasons to ban AR-15-style weapons because of the dangers they pose, to schools, innocent bystanders and police.

Gun rights advocates, such as the National Rifle Association, have argued that such a ban would violate the Second Amendment.

As the NRA told the Supreme Court in 2015 as it unsuccessfully sought review of one of the four appeals court rulings: “Firearms that are commonly chosen by law-abiding citizens for lawful purposes cannot be banned. While some contours of the Second Amendment have been left to future evaluation,” it said in an amicus brief, ”at least this much is clear from recent decisions by this Court.”

But that much has not been “clear” to the appeals courts that have reviewed the issue.

For the 4th Circuit judges in the Maryland case, the question came down to whether military-style weapons were necessary for self-defense and whether the government has a legitimate interest in regulating them.

King noted in the majority opinion that Maryland law enforcement officials could not identify a single case in which a Marylander had used a military-style rifle or shotgun, or needed to fire more than 10 rounds, to defend herself.

As Flynn and Barbash note, the Fourth Circuit opinion, although it is the most recent, is consistent with rulings from three other Circuit Courts of Appeal across the country. Each of these cases was fully litigated at both the District Court and Court of Appeals level and in each case, the Supreme Court declined to accept the case for review when asked to do so.

In a 2011 case arising out of the District of Columbia that has dubbed Heller II due to the fact that it involved essentially the same parties as in the Supreme Court’s 2005 ruling in District of Columbia v. Heller, the Court of Appeals for the D.C. Circuit ruled that the District’s ban on “assault weapons” and other weapons with the capability of firing of large amounts of ammunition in a short period of time was Constitutional and that the ban did not impugn the right of self-defense on the right of self-defense recognized by the Supreme Court in the original Heller decision. Additionally, the Court held that the District had sufficient justification to believe that such weapons were too dangerous to be considered effective for self-defense and that such weapons posed “grave risks to bystanders and police officers.

In an April 2015 ruling, the Seventh Circuit Court of Appeals upheld a similar ban enacted by the City of Highland Park, Illinois. In this case, the law in question banned ”any semiautomatic gun that can accept a large-capacity magazine.” In its opinion, the court noted that the relevant law left residents “with many self-defense weapons,” including pistols, handguns, and rifles that did not meet the rather specific definition of a prohibited “assault weapon.” The Court also made note of the dangerous nature of these weapons and noted that they have been the predominant weapon of choice in mass shooting incidents around the country. The court also noted that while a ban on “assault weapons” and high-capacity magazines would probably not prevent all shootings, “but it may reduce the carnage if a mass shooting occurs.” This, the Court noted, was a sufficient factual basis on which to justify a ban on its own. Finally, the Court made note of a constitutional principle that conservatives are often eager to bring up in other situations, federalism and the idea that states and local jurisdictions should generally be free to enact the laws they deem to be appropriate as long as they don’t clearly violate a provision of the Federal Constitution.

Finally, in September 2015, the U.S. Court of Appeals for the 2nd Circuit reached the same conclusion in a case that challenged “assault weapons” bans enacted by New York and Connecticut that banned of “assault weapons” and certain large-capacity magazines in the wake of the 2012 massacre at Sandy Hook Elementary School. While conceding that a ban was “broad and burdensome,” the Court unanimously ruled that the laws were constitutional and not barred by the Second Amendment. The panel noted that weapons such a those subject to the ban “have been understood to pose unusual risks,” resulting in “more numerous wounds, more serious wounds, and more victims.” The court also noted that the weapons are disproportionately used in criminal acts in general and in mass shooting incidents in particular and that they have also been disproportionately “used to kill law enforcement officers.”

As stated, these four cases are the only rulings on state or local laws banning “assault weapons” that have been handed down by a Federal Circuit Court of Appeals in the nine years since the Supreme Court handed down the ruling in District of Columbia v. Heller and the eight years since it handed down its decision in McDonald v. Chicago. In the first case, of course, the Court held that the right protected by the Second Amendment was an individual right that included the right to defend oneself in one’s home. As a result, the Court found that the District of Columbia’s essentially complete ban on owning a handgun was unconstitutional. In McDonald, the Court struck down Chicago’s ban on handgun ownership under essentially the same principles as it had applied two years earlier in Heller. The ruling also held that, like the majority of the rest of the Bill of Rights, the Second Amendment was applicable to the states via the doctrine of incorporation. Since that time, though, the Court has declined to hear essentially any other cases arising under the Second Amendment, including both laws banning “assault weapons” and cases challenging state and local laws regarding concealed carry permits. Most recently, Court this week declined to hear an appeal involving California’s ten day waiting period on the purchase of any firearm. What this means, of course, is that the rulings from these various Circuits remain the law of the land in the Circuits that they were decided in, as well as being persuasive authority for any future District Court or Circuit Court of Appeal that may hear a challenge to an assault weapons ban in the future.

While we can’t necessarily draw any conclusion from the Court’s decision not to hear these cases, it is worth noting that it does appear at least on the surface  to be consistent with something that the late Justice Antonin Scalia noted in his majority opinion in Heller:

The Miller decision that Scalia makes reference to here is United States v. Miller,  a 1939 ruling from the Supreme Court upholding a law enacted in 1934 which placed restrictions on the ownership of the machine guns (i.e., fully automatic weapons) of the day and heavily taxed their owners. Clearly, Scalia was intending to make it clear that Heller was not intended to overrule Miller and that it was also not intended to stand for the proposition that any regulation of weapons, including outright bans on the ownership and sale of certain types of weapons, was per se invalid under the Second Amendment. Based on that language, it seems clear that the argument that laws banning “assault weapons” are unconstitutional would face an uphill battle even in the conservative Supreme Court we have today and that the lower Federal Courts are likely to continue to uphold state and local, and if it ever came to pass Federal, laws banning such weapons in the future. 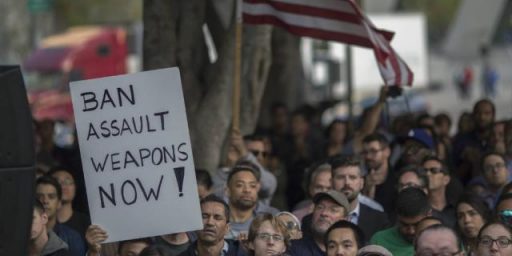