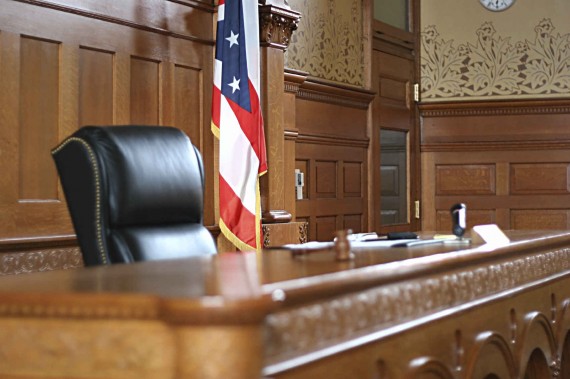 In the July issue of Reason, Timothy Lynch lays out an argument against the method by which the vast majority of criminal cases are resolved in the United States:

Criminal cases rarely go to trial, because about 95 percent are resolved by plea bargains. In a plea bargain, the prosecutor usually offers a reduced prison sentence if the defendant agrees to waive his right to a jury trial and admit guilt in a summary proceeding before a judge.

This standard operating procedure was not contemplated by the Framers. The inability to enter into plea arrangements was not among the grievances set forth in the Declaration of Independence. Plea bargaining was not discussed at the Constitutional Convention or during ratification debates. In fact, the Constitution says “the Trial of all Crimes, except in Cases of Impeachment; shall be by Jury.” It is evident that jury trials were supposed to play a central role in the administration of American criminal justice. But as the Yale law professor John Langbein noted in a 1992 Harvard Journal of Law and Public Policy article, “There is an astonishing discrepancy between what the constitutional texts promise and what the criminal justice system delivers.”

Right off the bat, I’ve got to say that this is a silly argument. The fact that plea bargaining wasn’t mentioned in the Constitution, or that the Bill of Rights contains explicit guarantees of the right against self-incrimination, the right to counsel and to confront witnesses, and the right to a jury trial, is largely irrelevant in a discussion about whether or not it is a proper practice, or a good idea. Moreover, the suggestion that the practice of plea bargaining is somehow unconstitutional, which this part of Lynch’s argument seems to suggest is just absurd. There’s nothing in the Constitution that prevents a Defendant from agreeing to waive his 5th, 6th, or 7th Amendment rights and plead guilty to a crime rather than risk going to trial.

Lynch goes on to paint what I think is a rather distorted view of both the plea bargaining process, and the reasons that both a prosecutor and a defendant would enter into a plea agreement:

No one ever proposed a radical restructuring of the criminal justice system, one that would replace jury trials with a supposedly superior system of charge-and-sentence bargaining. Like the growth of government in general, plea bargaining slowly crept into and eventually grew to dominate the system.

From the government’s perspective, plea bargaining has two advantages. First, it’s less expensive and time-consuming than jury trials, which means prosecutors can haul more people into court and legislators can add more offenses to the criminal code. Second, by cutting the jury out of the picture, prosecutors and judges acquire more influence over case outcomes.

From a defendant’s perspective, plea bargaining extorts guilty pleas. People who have never been prosecuted may think there is no way they would plead guilty to a crime they did not commit. But when the government has a “witness” who is willing to lie, and your own attorney urges you to accept one year in prison rather than risk a 10-year sentence, the decision becomes harder. As William Young, then chief judge of the U.S. District Court in Massachusetts, observed in an unusually blunt 2004 opinion, “The focus of our entire criminal justice system has shifted away from trials and juries and adjudication to a massive system of sentence bargaining that is heavily rigged against the accused.

What Lynch completely misses here are the advantages to a Defendant that come from plea bargaining. The most obvious one is a sentence that is typically substantially lighter than what they might get if they went to trial and were found guilty. Additionally, though, a Defendant might decide to plead guilty in order to avoid legal fees that they cannot afford (although this doesn’t come into play when a court-appointed attorney is involved, obviously), or in order to avoid having the embarrassing details of a case become public.  Additionally, it’s often the case that the charge that a Defendant pleads guilty to is a lesser charge than what they were charged with, or what they could potentially be convicted of if they went to trial. A plea deal that allows a Defendant to avoid a felony conviction and plead guilty to a misdemeanor is, in many cases, a deal that’s too good to say no to. Similarly, it’s not uncommon for some first-time misdemeanors to be resolved with a disposition that results in all charges being removed from a Defendants record if they don’t commit another crime over a certain period of time. Again, most Defendants would be foolish not to accept that kind of a deal. Lynch’s assertion that Defendants are always the suckers in a plea bargain deal simply isn’t true.

Are there abuses in the plea bargaining system? No doubt, yes there are. One could argue that court-appointed attorneys, for example, have an incentive to pressure their clients into accepting quick plea deals because they lose money the more time they spend on a case. Similarly, prosecutors sometimes use the threat of felony charges that might not hold up at trial to force a plea to a misdemeanor. On the whole, though, it’s been my experience that the pleas that are struck, especially in the “small potatoes” cases are fair and very generous to Defendants.

There’s a final argument about plea bargaining that Lynch addresses, but dismisses derisively:

The most common apologia for plea bargaining is a pragmatic argument: Courthouses are so busy that they would grind to a halt if every case, or even a substantial share of them, went to trial. But there is nothing inevitable about those crushing caseloads. Politicians chose to expand the list of crimes, eventually turning millions of Americans into criminals. Ending the disastrous war on drugs would unclog our courts in short order.

In any case, trials are one of the few things the government indisputably should be spending money on. If additional funds are needed, free them up by stopping the nation-building exercises abroad and the corporate welfare here at home. The administration of justice ought to be a top priority of government.

This is all true, and its absolutely true that criminal courtrooms across the country are filled with people charged with petty drug possession offenses that ought not to be dealt with by the courts at all. That, however, is an argument against the War On (Some) Drugs, not an argument against the right of a Defendant to decide to resolve the case against him by making an agreement rather than risking a trial.