Yesterday, Hillary Clinton made news with some of her strongest criticism of the President’s foreign policy to date, and central to her argument is the idea that arming the Syrian rebels, which she advocated while Secretary of State, would have somehow prevented the rise of ISIS and thereby avoided the problems that group is creating in Iraq and elsewhere around the world today. Clinton isn’t alone in this position, of course. It’s one that has been repeated by Republicans such as Senators John McCain and Lindsey Graham and Congressman Peter King, all of whom have been advocating for more aggressive American action in Syria for years now. The basic logic of the argument seems to be that the United States could have prevented groups like ISIS from dominating the Syrian rebellion if they had found a way to figure out who the “good” Syrian rebels were and provided them with military assistance. The fact that this argument allows people like Clinton and McCain to argue that everything we’re dealing with now could have been avoided if only people had listened to them is, of course, more than coincidental since to a large degree it involves an effort on their part to advance their own political interest by claiming, with little evidence, that our current situation is the responsibility of those that disagreed with them.

As Marc Lynch notes, though, the idea that arming the “good” Syrian rebels could have accomplished anything like what these people are claiming doesn’t stand up to examination:

There’s no way to know for sure what would have happened had the United States offered more support to Syrian rebels in the summer of 2012, of course. But there are pretty strong reasons for doubting that it would have been decisive. Even Sen. John McCain was pretty clear about this at the time, arguing that arming the rebels “alone will not be decisive” and that providing weapons in the absence of safe areas protected by U.S. airpower “may even just prolong [the conflict].” Clinton, despite the hyperventilating headlines, only suggested that providing such arms might have offered “some better insight into what was going on on the ground” and “helped in standing up a credible political opposition.” Thoughtful supporters of the policy proposed “managing the militarization” of the conflict and using a stronger Free Syrian Army as leverage to bring Assad to the bargaining table.

Would the United States providing more arms to the FSA have accomplished these goals? The academic literature is not encouraging. In general, external support for rebels almost always make wars longer, bloodier and harder to resolve (for more on this, see the proceedings of this Project on Middle East Political Science symposium in the free PDF download). Worse, as the University of Maryland’s David Cunningham has shown, Syria had most of the characteristics of the type of civil war in which external support for rebels is least effective. The University of Colorado’s Aysegul Aydin and Binghamton University’s Patrick Regan have suggested that external support for a rebel group could help when all the external powers backing a rebel group are on the same page and effectively cooperate in directing resources to a common end. Unfortunately, Syria was never that type of civil war.

The idea that these rebel groups could be vetted for moderation and entrusted with advanced weaponry made absolutely no sense given the realities of the conflict in Syria. These local groups frequently shifted sides and formed alliances of convenience as needed. As MIT’s Fotini Christia has documented in cases from Afghanistan to Bosnia, and the University of Virginia’s Jonah Shulhofer-Wohl has detailed in Syria, rebel groups that lack a legitimate and effective over-arching institutional structure almost always display these kinds of rapidly shifting alliances and “blue on blue” violence. A “moderate, vetted opposition” means little when alliances are this fluid and organizational structures so weak.

The murkiness of the “terrorist group” line in this context is apparent in these changing alliances and conflicts. For instance, the United States recently designated two key Kuwaiti Islamists as terror financiers, accusing them of channeling funds to Jubhat al-Nusra and the Islamic State. But both were better known as backers of Ahrar al-Sham, a large Salafist organization that then worked within the Saudi-backed Islamic Front. And as recently as June, when they were allegedly funding the Islamic State and al-Nusra, one of them was holding events with FSA commander Riad al-Assad. These complexities, so deeply familiar to everyone who studies the conflict, deeply undermine the assumptions underlying plans resting on identifying and supporting “moderate rebels.”

Many have argued that the United States might have changed all of this by offering more support for the FSA. But based upon his outstanding recent book “Networks of Rebellion,” the University of Chicago’s Paul Staniland urges caution. Initial organizational weaknesses have long-lasting implications. “Pumping material support” into them, he observes, “might buy some limited cooperation from factions that need help, but is unlikely to trigger deep organizational change. This means that foreign backing for undisciplined groups will not do much.” Syria’s famously fractured and ineffective opposition would not likely have been miraculously improved through a greater infusion of U.S. money or guns.

In short, then, discussion of U.S. support for Syria’s rebels overstates the extent to which such aid would matter given the diverse sources of support available. U.S. arms would have joined a crowded market and competed within an increasingly Islamist and sectarian environment. Even the argument that Islamist fighters would shave off beards and follow the money if the United States got involved is self-defeating, since it admits that they would just as easily flip back when a better offer comes along. Both state financing and the public campaigns exacerbated rebel fragmentation on the ground as each group jockeyed for access to lucrative external patrons. The United States had far less money to offer rebels compared with the Gulf states, and placed far more conditions. It might have been able to offer uniquely privileged access to advanced weaponry, which many rebels did dearly want. Anti-tank missiles did find their way to rebel groups anyway, of course, presumably with U.S. support. But it’s difficult to imagine any responsible U.S. official signing off on providing surface-to-air missiles, for reasons made graphically apparent by the shooting down of the Malaysian Flight MH17 over Ukraine.

Lynch hits on several important point, but the most important one is the fact that the distinction between the “good” and “bad” actors among the Syrian rebels was never easy to figure out to begin with, and was in many respects largely an invention of American politicians who were arguing in favor of greater American involvement in the Syrian war. That’s not to say that all of the rebel groups are jihadists, of course, but they clearly were allies with jihadists and were willing to work together with them in their fight against the common enemy in Damascus. More importantly, it became eminently clear not long after the war started that the jihadist backed forces were the stronger part of the rebel coalition, thanks in no small part to aid coming from governments and private individuals on the Arabian Peninsula. The idea that the United States would have been able to exert enough influence over the rebellion to make sure that “our” people were triumphant is yet another display of the kind of American arrogance that has gotten us in trouble around the world so many times before. While President Obama has done much in the realm of foreign policy worthy of criticism, his decision to avoid entanglement in the Syrian civil war is not one of them. Clinton, McCain, and the others are quite simply wrong about this.

Daniel Larison makes another excellent point that the advocates of arming the rebels fail to acknowledge, that our experience in Iraq from 2003 to 2011 stands as best argument against the idea that we could have influenced events in Syria:

One would think that events in Iraq over the last few months would dispel the illusion that U.S. arms and training guarantee that things will develop in a certain way. The U.S. spent years and enormous sums of money to train and equip the Iraqi army, and it was useless in preventing ISIS from seizing large parts of Iraq. There would not have been nearly as much time, training, or resources devoted to arming part of the Syrian opposition, which was in a much weaker position from the start, but we are supposed to believe that if it had started a year or two sooner it would have halted the emergence of these jihadist groups. More likely, the weapons supplied to “moderate” rebels would have been lost through conflicts with jihadists, or “moderate” rebels would have used those weapons to weaken the regime’s control and help to expose even more of Syria to the depredations of the most fanatical rebels. Insofar as the “moderate” opposition and jihadists coordinated against the regime, there would presumably be some pooling of resources, so it is also conceivable that U.S. arms would find their way into jihadist hands with the agreement of the Washington-approved rebels.

If the United States had armed the “good” rebels, assuming that we could have even identified them, then it is inevitable that those arms would have ended up in the hands of ISIS or one of its jihadist allies either via trades between the groups or by theft. Moreover, it is apparent that there was little that we could have done to stop our supposed allies from continuing to finance the more radical elements of the rebellion, just as they did in Libya. ISIS, which people tend to forget used to go by the name al-Qaeda in Iraq during the U.S. occupation, would have gained much the same influence over the Syrian rebellion that it had before, then, the only difference is that they would have done so with U.S. supplied weapons How exactly we would have been better off in this world that Clinton and the others wanted to create is beyond me. 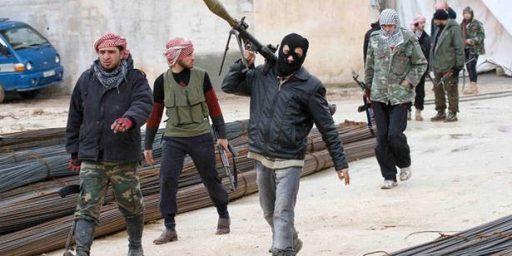