Posting will be exceedingly light this morning, as I’ll be writing lots at New Atlanticist about the Atlantic Council’s annual Awards Dinner, which was held last evening. It together more than 900 leaders from over 50 countries to honor individuals who have made exceptional and distinctive contributions to the strengthening each of the four pillars of the transatlantic relationship: political, military, business, and humanitarian. Our distinguished guests included ten current or former heads of state and government, two dozen members of Congress, 40 ambassadors to the United States and 35 global chief executives, and numerous senior officials of the Obama administration.

When I attended my first of these three years ago, honoring Tony Blair, Mike Mullen, Rupert Murdock, and Evgeny Kissin, I feared that we had set the bar so high that it would be impossible to reach again. But we did the very next year, honoring George H.W. Bush, Helmut Kohl, David Petraeus, Sam Palmisano, and Thomas Hampson. And, while we may never top that in my mind — Bush was my commander-in-chief and a personal hero and Petraeus is the embodiment of the scholar-warrior — the star power of Bill Clinton, Bono, Josef Ackerman, Jim Mattis, and Stéphane Abrial is off the charts.    I’ll let others worry about next year.

My first post, “2010 Awards Dinner Highlights,” rounds up the evening, including the best one-liners.

General Jim Jones had perhaps the line of the night when he began his introduction of former President Bill Clinton with, “I think I’ve used my quota of jokes this week, so I’ll pass.”  It was a subtle allusion to a silly kerfuffle over an old joke he modified slightly at the expense of the Taliban at another institution’s dinner event.  He needn’t have worried: We’ve got a better sense of humor at the Atlantic Council.

Much more at the link.  Transcripts, videos, photos, and such will be available later in the day.

UPDATE:  See also, “Bono on ‘Peaceniks in Fatigues’” and “Ackermann: We Stand at a Crossroads.” 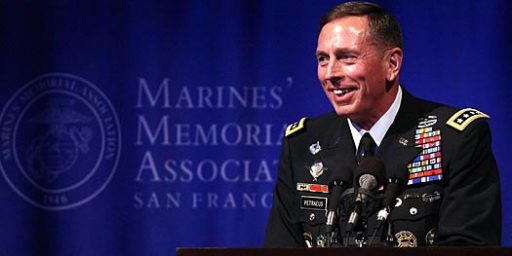