Baghdad Bob Was Right After All

Emily DePrang looks back at "'Baghdad Bob' and His Ridiculous, True Predictions." 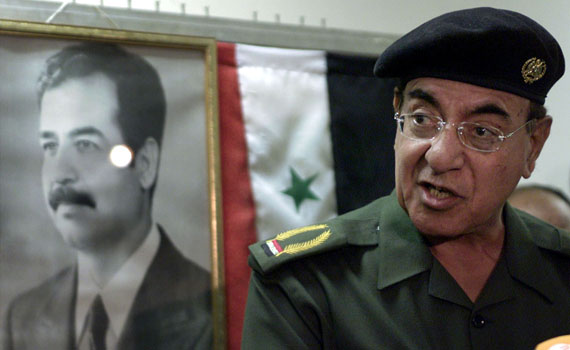 Emily DePrang looks back at “‘Baghdad Bob’ and His Ridiculous, True Predictions.”

In March of 2003, Saddam’s Minister of Information was everybody’s favorite inadvertent comedian. Sporting a kicky black beret and delightfully bombastic lexicon, Mohammed Saeed al-Sahaf appeared on TV daily to predict American failure and deny the Baghdad invasion–sometimes even as U.S. tanks appeared behind him. “He’s great,”President George W. Bush said of Sahaf, admitting that he occasionally interrupted meetings to watch Sahaf’s briefings. “Someone accused us of hiring him and putting him there. He was a classic.”

Sahaf became the subject of T-shirts, mugs, adoring websites, a pop song, and an action figure. Besides adding levity to news cycles otherwise filled with fuzzy green explosions, Sahaf represented everything that made Iraq’s invasion seem not quite like a real war. Wars are serious, and this guy was adorable. Even if you opposed the Iraq invasion, you had to admit it’s hard to respect a government whose official mouthpiece told a reporter, “Shock and awe? It seems that we are the awe on them. They are suffering from the shock and awe, okay?”

But it turns out that “several of his more ludicrous predictions have since come true–some in the ways he meant, and, more chillingly, some in ways no one (else) could have foreseen.”

“The crook Rumsfeld said yesterday that they are hunting mass destruction weapons in Baghdad and Tikrit, and yesterday I replied to that cheap lie.”

“I assure you that those villains will recognize, will discover in appropriate time in the future how stupid they are and how they are pretending things which have never taken place.”

As a 2012 CIA study concluded definitively, Saddam Hussein didn’t have weapons of mass destruction. Nor did Iraq have 18 mobile laboratories for making anthrax and botulism, as Secretary of State Colin Powell claimed before the United Nations in February 2003, nor had Saddam Hussein recently tried to buy large quantities of uranium from Africa, as President Bush asserted in his 2003 State of the Union address. A decade of war was based on things that had never taken place.

“They are trying to say that the Iraqi is easy to capture, in order to deceive the world that it is a picnic… One day, they [will] start facing bitter facts.”

“The decisive battle is throughout Iraq. They do not know in what mud they are wading.”

Sahaf wasn’t just right about the fact that Iraqis would reject American invasion. He was right about how. As predicted, troops were most vulnerable when in transit, especially from “the people of the countryside,” thanks to improvised explosive devices (IEDs). Of the more than 6,600 soldiers killed in Iraq and Afghanistan, almost exactly as many were killed by IEDs as by firefights. “After a decade of war in Iraq and Afghanistan costing more than $1 trillion, U.S. troops continue to die and be maimed by a weapon that can be cobbled together with spare parts costing less than $30,” journalist William Levesque wrote in the Tampa Bay Times in 2012.

And the warning that resistance attacks would “only go up”? Well, they came down eventually–about five years later. But in 2003, the year “major combat operations” officially began and ended in Iraq, 486 American servicemen and women died there. By the time the last U.S. tanks rolled out of Iraq in 2011, the grassroots resistance Sahaf predicted had taken 4,474 American lives.

Some of the other examples, such as taking as a “prediction” his quote that”The infidels are committing suicide by the hundreds on the gates of Baghdad” and pointing out that the military suicide rate has gone up drastically are, to say the least, a stretch. But Baghdad Bob did turn out to be less foolish than it appeared a decade ago.