AP/YahooNews reports U.S. Takes Saddam Palace, Topples Statue. They also report that things aren’t going so well for the Iraqi soldiers who have decided not to flee or surrender:

Some Iraqi soldiers jumped into the Tigris River to flee the advancing column of more than 100 armored vehicles. About a dozen others were captured and placed inside a hastily erected POW pen on the grounds of the bombed-out, blue-and-gold-domed New Presidential Palace.

An estimated 600 to 1,000 Iraqi troops were killed during the operation, said Col. David Perkins. “We had a lot of suicide attackers today,” he said. “These guys are going to die in droves … They keep trying to ram the tanks with car bombs.”

Not a good plan. 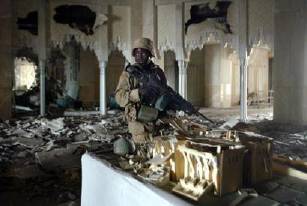 U.S. Army Spc. Harrison Grimes from A Company, 3rd Battalion, 7th Infantry Regiment, walks past the damaged model of the Saddam Hussein palace he is searching, after a bombing in Baghdad Monday, April 7, 2003. (AP Photo/John Moore)
FILED UNDER: Iraq War