Beau Biden, the former attorney general of Delaware and son of Vice President Joe Biden, has died of brain cancer at the age of 46. 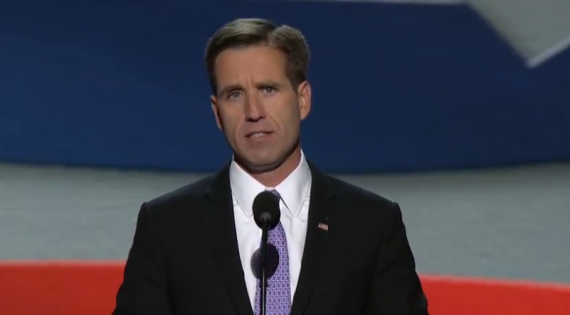 Beau Biden, the former attorney general of Delaware and son of Vice President Joe Biden, has died of brain cancer at the age of 46.

Biden, 46, the oldest son of the vice president and the rising star of a family dynasty, had been admitted recently to Walter Reed National Military Medical Center in Washington as he fought the cancer, a battle that his father largely kept private in the last weeks as his son clung to his life.

“The entire Biden family is saddened beyond words. We know that Beau’s spirit will live on in all of us—especially through his brave wife, Hallie, and two remarkable children, Natalie and Hunter,” Vice President Biden said in a statement that was released Saturday night.

Beau Biden, a major in the Delaware Army National Guard’s Judge Advocate General Corps, became one of his state’s most popular public figures and had been considered the frontrunner for the 2016 race to become the state’s next governor, but in August 2013 he checked into one of the world’s most renowned cancer treatment centers, Texas Medical Center, in Houston to begin his fight with the disease.

Biden is survived by his wife, Hallie, and two children.

He became a national political star in 2008 after delivering a stirring introduction of his father at the Democratic National Convention in Denver the night Joe Biden accepted the nomination as vice president, and a little more than a month later Beau Biden deployed to Iraq and served there for one year — except for a trip home in January 2009 to see his father take the oath of office as vice president.

Truly shocking and sad news. The Biden family, while extraordinarily successful in politics, have endured unspeakable tragedy. Joe was elected to the Senate at the absurdly young age of 29—just barely turning the Constitutional minimum age of 30 by the time of his swearing in—only to have his wife and three children get into a car crash before his swearing in. His wife and daughter died and his boys Beau and Hunter were severely injured. And now Beau has been taken from him, too.